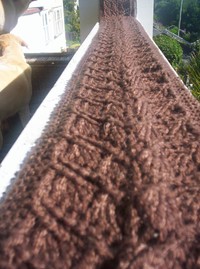 Branching Out is complete – it just needs to be blocked and have the ends sewn in. It looks lovely and feels luxurious. You can just see the Labradors in the top left hand corner.  Creek has been given the boot – it is up the Creek without a paddle.  Instead I am making Midwest Moonlight – or as I like to call it : Night-time in the North!!! I am in love with this pattern and this scarf. The pattern is easy but looks much more spectacular. It is knitted, of course, in the soft and scrumptious wool given to me by my Secret Pal!!

ACMA and I have been watching Season 1 of Stargate. We found an episode we had never seen : neither of us, ever!! What a find!!! We are hoping there may be a few more!! ACMA made the tastiest roast lamb dinner ( with no T*m Cr***e, than goodness) I had a whole parsnip to myself and it was caramelised and soft – no woody centre at all.

Harki is feeling so much better. We have to play all the time and this morning she woke me up in high excitement :  she was bouncy and happy and had special alert ears!! She was shivering  with anticipation when I said we would go for a ride in the car and a walk. Peri has been Sleeping for Britain. She likes to sleep under her Labrador Polar Fleece blanket, even when it is warm. Last night she was so hot she was panting, but would she come out from under

the blanket? NO!! I had to unwrap her and then she insisted on lying on top of it anyway. This is the same Labrador who insists on catching all the cool air from Mr Cooly to my detriment!!! When we went for a walk today, they both ran down the track and had a swim : Harki only had a dip, but Peri had a genuine swim.

Tomorrow the Knitting Coven meets and this might be my last knitting  for a fortnight as I have a quilt and a skirt and a top to make by the 12th November.

I have also spent 11 precious minutes being on hold to the Council. I was inquiring about the Heritage Forest and if there were any educational resources or guides available. Since they couldn’t manage to direct me to the Parks and Rec Dept, and I kept ending up at the front desk all the time, I don’t hold out much hope for a guide!!!!! I will have to go in, in person  and try to get some answers….

This morning Tim Cox interviewed Janie Dickenson ; the outgoing Mayor, and Ivan Dean; the Mayor-Elect and  MLC. While Janie was full of grace and refused to cast any aspersions,  Ivan had no such qualms and proceeded to say very snarky things about Janie’s Mayoral time.  He is one of the Old Guard, he got their preferences and he will get their support in the Chambers, unlike Janie who was, according to the Old Guard, the wrong gender and the wrong age.

Oh no. Now there is an optometrist or an audiologist who is a teacher wannabe saying that he knows all about reading and teachers know nothing. I don't go into his office and try to tell him how to do his job. Why do people think that they always know better than teachers? Teachers have training, it's not as if you just spring, fully formed, into the classroom. I think that because everyone has been to school, they think they know how to do it. They are saying that no-one ever teaches phonics. Rubbish. Phonics is such a big part of teaching children to read, not the only part, but a big part. I think the main problem is that these so-called experts confuse the Department with the teachers!! They are making me cross and I can't listen to them anymore. Ahhhhhhhhhhhhhhhhhhhhhhhhhhhhhhhhh!!

There is an interesting letter to the editor in todays Examiner about our council election.

Love branching out it looks looooong, will we see it on Tuesday?

Branching out looks lovely! Hope we see it Tuesday.

I find that the same thing happens when you become a parent for the first time. You get everyone out of the woodworks teeling you how to raise your new baby..The most interesting ones are the CHILDLESS people who think they know everything. Drove me nuts.

Branching out looks lovely. What a beautiful, rich colour.

Isn't Peri such a darling. She looks sooooooooooooo cute in her blankie.