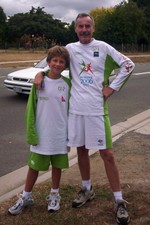 Today the Madcage man was running with the Commonwealth Baton. I went along and my car accidentally joined the first convoy!!! There was a veritable phalanx of police when the Madcage man ran at 10-51am at Legana. I took photos and I called out ‘Hooray for the Republic. The Republican Games for Australia. An Australian Republic’  and lots of people clapped, even officials clapped!! Then I was invited to the Apres-Run lunch so I accidentally went out!! I ate the most deliciously creamy Scallop, Bacon and Lemon Risotto. The scallops were plump and thier roe was very colourful and tasty. I am so tired now I can’t even knit anymore. I took my knitting but there was no waiting, no delay, just a hot UK baton!!

I am past the underarm cast off on the as yet still nameless wrap cardigan. I think I shall call it Mulberry Tree, and I have one in my backyard, and silk worms eat the leaves and are wrapped in silk as I will be!! I will s

oon have finished the third ball so I bought some inexpensive pure wool in light green to have a go at making the felted bunnies from YARN #2. I think they will be part of the Easter present this year. The Liquorice Allsorts scarf is all complete. It was quick to 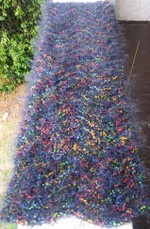 knit and I love the feather and fan pattern and the way it produces such a nice effect with the yarn.

The poor Labradors didn’t realise they were being abandoned for 3 hours so they were very happy to see me when I arrived home. I have 2 new Library books to read and I bought some jewellery bits to make some earrings and a bracelet with my new green wooden beads!!!

At the Knitting Coven one of our conversations was about covering measuring tapes, the ones in a little case with a whippy-inny button on the side. Sharon had a lovely felted cover. At Whipup today there is a tutorial about this very thing!! I think I shall be covering my 2 tape measures tomorrow!!!

Thanks for the link to the tape measure sight, I have a couple of 'plain' measures that are going to get a new lease of life over the weekend.

Me again, I just found these over at the Wool Shack