Our Home is Skirt by Sea 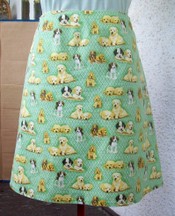 It all started when Harki caught her nail when she was hopping into the car. She gave a little yelp but then she seemed happy on her walk, and it got me to thinking that I should clip The Labradors' nails. Usually the Doctors do it, but I can't run to the Hospital every time their nails need clipping: and so it came to pass that Mr Clippy came to live at our house. Oh he's small and innocuous, that Nail Clipper, but he has certainly stirred things up. I decided I would bribe The Labradors in order to clip their nails with fewer hassles. At first, just smelling Mr Clippy or letting me touch their paws merited a special piece of Dog Muesli bar, and then we moved onwards and upwards. By Day 2, Harki was happy to lie on the bed and I could have clipped her nails morning, noon and night- with or without bribery. Peri, on the other hand, is made of sterner- or less clever- stuff, and she is still very flighty. It was during one of these 'flights' that she leaped onto my lap and her paw, with its long nails, made a big hole in my favourite Dolphin skirt. What jolly good luck that I had already made a new green skirt and now I have my new

Green Labrador skirt as well. Two new skirts, so on Australia Day our home is truly skirt by sea!!!

This year, today, Australia Day: I went to the Citizenship Ceremony, or Nationalisation as I like to call it. There was only one 'mateship' uttered, so on the whole it was pretty good. I did get a tear in my eye when the choir sang 'We Are Australian' and then we all sang the National Anthem. Afterwards there was morning tea with delicious Egg and Lettuce sandwiches (green and gold colours!!!),

ANZACs, sausage rolls and Lamingtons(green and gold coloured too!!!) After the discussion about biscuits, I was forced to have some Iced Vovos for my Elevenses the other day. They weren't as bad as I had anticipated. I think I will have to try some Lemon Crisps next, as brought to the fore by Donni. These were first made her in 1962, a very good year, and are crisp salty biscuits filled with a sweet lemony cream. Very unusual and moreish. And Wagon Wheels?? Well they made the amusing SMH list today and here is a little selection.....

You know you're Australian if …

Harki has been having a lovely time playing with her Squeaky Shrek Head, and sh 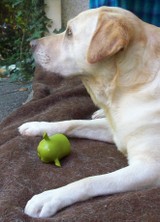 e has learned its name and can pick it out of a Toy Line Up. Peri has been hoping that there might be some more tasty treats. She's not a dog to do things by halves, and dives right in!!! There are not any treats in the box, just aromas......

I have finished the Pearly Queen Bag. I made it especially with linen, some Japanese material for the lining of the bags and handles, and sewed it with cotton thread. Instead of interfacing I used very thin cotton quilt wadding so it is soft yet sturdy. I have hidden my tag in the very bottom. I am very pleased with the handles, I cut the contrast fabric 6mm narrower than the outer handle fabric so when I turned it right side out, the brown linen rolled over the contrast a 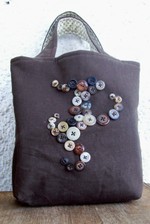 I have also, Ta Da!! finished my Mum's The Word socks. At last!! They are all done and just need to be de-dog haired and then posted off. So, no photo yet. I don't know what to knit now. I owe MrsDrWho some TARDIS socks for Christmas, but they are beaded and I have never knitted with beads before. I want my Brain to be totally cold and functioning at its peak (Ha ha) before I tackle them. I expect I should finish CornuTOPia. Get some wear before the Summer is over. And sew up my Errol CardiFlynn aka CPH. Then again, I have pomegranates, so I think I might make a little dessert. How I miss Smack The Pony TV series (avert your eyes from this link if you are a little delicate), I should get the DVDs: are you reading this MrsDrWho?? Smack The Pony. Need the DVDs. Are you in an ordering mood???

I have had a Red Hot Go at replying to my comments. Actually for the last two days it has been Luke Warm as the Internet has been having a conniption. So slow it could be almost Not Moving At All. Sigh. I think it's because The Apple Isle is at the Unfashionable end of the Internet Line. Don't hold you breath, but I hope to be back with the Ice Cream recipe and pictorial evidence that I have knitted some socks!!!

* Actually The Apple Isle is the Last Bastion of "Cobber"!!!

Obviously I'm Dinky-Di. Would be hopeless at the citizenship test - but I do know how to do a yewy at a uni in a ute.

Wagon Wheels - so true. They are more like a biscuit than the huge chocky snack they used to be.

Happy Australia Day! Mmm Wagon Wheels are my fave, but alas they are smaller! Like the ice vo-vo's too!

hehehehe..the dazza and shazza made me snort my beer out my nose.. ouch.

I am still giggling heaps here even if I have a sore nose..lol

no amount of bribery gets my pooches to willingly get nails clipped. it is a two person job and entails incurring many scratches on the arms!

Aaargh - for a certain generation (those born in 1962 for example )- Cobbers will forever be a hard caramel lolly covered in chocolate... I love lemon crisps and haven't had them for ages! - Love the list of Aussie things! I was never a great wagon wheels fan (although I believe they are smaller - like mint and chocolate I am not a fan or marshmallow and choc together - I never liked Choc royals (aaah nostalgia - ain't it grand!)

"You know what it's like to swallow a fly, on occasion via your nose."
Eww.
"You find yourself ignorant of nearly all the facts deemed essential in the government's new test for migrants."
Not just an Australian thing. I tried it for this proposed quizzing thing for new citizens and I'd've been chucked out of the country if thems were the rules!
Thanks for obliging me with the modelled skirt. Sorry about the old one, though.

I thoroughly enjoyed reading your post,as I always do but that Aussie list is spot on,though Bazza and Shazza seems to be common here!
On the school costs ,add $220 for shirts,3 each x4 (working full time its a necessary evil to help with washing issues) then I have to find black shorts and in a month or so trousers for the boys,one of which is 12 1/2 yrs but in mens 32 already,with 11 US feet too,its virtually impossible to find school uniform items in his size,uniform shop is useless but we could looking,LOL
Lattice bikkies,YUM.....

What luck -- green fabric with labs on it!!

And I think any way you imagine it, a horde of women in black thongs just doesn't seem that appetizing.

Perhaps you could come and tame my children who tend to carry on at nail clipping time!

Oh this made me laugh even more than usual! I can sooo relate to the Wagon Wheel comment. It is a tragedy the size of it now! I love your new bag and skirt. It is wonderful having cooler weather some days now to feel human in and actually do stuff!!

Me and Mr. Larj have a system for Chief's nails, he holds him in a comfy position on the floor and I use a Dremel tool to buzz them short. He seems to be a little less freaked out by that then the clippy thing.

Love the Lab skirt! I need similar but with Dal's. LOL.

I don't know any of the Aussie terms given, perhaps a tutorial for some of us "Mericans". I know that the use of English in this country is amazingly diverse from state to state, area to area there are terms that people use in other parts of the country that leave me scratching my head. Oh, and I use the term English very loosely, it's not really English is it?

Ah, I have been indoctrinating the poor blighted peoples known as Americans in "chucking a u-ey" and other such delights.
My experience in customs is that people coming back from Asia try to bring in eggs and fish, uncooked of course! (ICK! no refrigeration on planes!)

Love the skirt, and the brown bag! My dogs hate nail clipping, but treats help to overcome the unpleasantness. Why do they always grow so fast?
Oh, and I LOVE the shrek head as chew toy! :o)

They should ask those questions on the national citizenship test, I reckon. Particularly the one about 'Am I Ever Gonna See Your Face Again'.

Love the skirt and bag!

hehee! love love the aussie list, thanks for sharing it! :)

Oh that list is a hoot! Although we called the choc-covered caramels "mates"...I wonder if that's a regional thing?

And I wonder if the dog museli bar bribe would work on a two-and-a-half year old who hates having his nails done?? Teehee!

I giggled my way through your selection of Aussie-ness, and clicked to giggle some more - thanks for sharing!
I think that the skirt is very you, and the button-bag an excellent artsy-random, the Shrek head looks as though he's not long for this world, and lattice bikkies make me think of CWA stands at the local show :>

I lay-by'd a new sewing machine on Saturday, I can't wait to get back into sewing again.

You are so...good at sewing - lovely skirt & bag. It must feel great to be an Aussie citizen on Australia Day - I had mine on an ordinary day & thank goodness I didn't have to take the test. Happy Australia Day.

Well we are back from the beach so my black thongs are now sadly back in the shoe basket. Thankfully they are the only thongs I own! ;) I've always loved a cobber, and I'm a mean Uey puller!! ahh I just love our country. Now must go as 'hubbo' is slinging another chop on the barbie.

You know, I just thought they were getting smaller because I was a small person when I first ate them. Are we seriously being ripped off???

I love your new skirt! If only I could find similar with cats on it. :)