I have been not busy, and busy, and definitely not Busy Phillips. Busy is her nickname, so she's not been given a virtue name: 'busy' is not on the list, I checked. Apparently 'busyness' is not a virtue!!! I don't have a nickname, and I'm not sad about that, but I do give extra names to all the dogs that live here. Coul 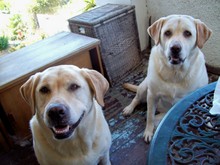 d Harki's name* be any longer???!! I am being gradually taken over by Friends: assimilated, absorbed, whatever. It is on every weeknight at 6pm, and at first I was a bit lackadaisical with respect to my viewing, but as time has passed, I am setting the timer so as not to miss it!! We have just started Season 4. Setting the timer is so easy now, I press the green Guide button, scroll across or down the TV Guide and then press Return twice. I love my new DVR. Has there always been a spell check on The Typepad?? I just noticed it today. It may have been there forever. I have interesting perceptual abilities!!(View the Basketball video to test your perception)

So, things what I have been doing (Thanks to Morecambe and Wise whose memory was evoked in Life on Mars last week. I can't stop humming "Give me sunshine..." and doing the silly dance on the inside)........  Well, I had some very nice numbers from The Specialist and The Specialist's Immediate Superior last week, and this means that when the Clinic people from Melbourne visit they might not be so gung ho for action. Hooray!!! My Lump has also been given the Surgeon's all clear and we are watching it to see what it will do. (My mind boggles at that thought!!!) School started on Thursday, and I started a migraine. This year is the first year I wasn't feeling sad not to be going back to school, but maybe I was sad in my unconscious even though I didn't know it? Can't say, but I did have to go to bed for 2 1/2 days. I could sleep for Australia in The 2008 Beijing Olympics, and so could The Labradors. They slept on the end of the bed from Thursday night all the way through till Sunday morning. Then we had hot weather, and that m 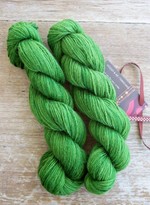 ade us all too hot, and

not in a cool 'hot babe' way either!!! Thankfully it rained this morning (MrsDrWho wasted a wish there) and we went for a 20 minutes walk to the shop at the corner and got beautifully wet and cool.

I have been knitting my Bag Swap bag for The Ravelry (Bag disguised to protect the innocent) I have finished my Face Cloth for my swap. I have also finished my second attempt at The Tea Cosy Swap!! I would request a universal crossing of fingers and toes tomorrow as I plan to be posting some parcels!! I can't show anymore photos until the parcels have been received. I bought some delightful wool from Donni. It is so very beautifully green and so very soft!!! The Little Red Hen thought of me and sent me some sock wool she was 'de-stashing' How kind!! I am about to buy some wool from The Lovely Katie at Live2Knit as

At The Knitting Coven on Tuesday people laughed, albeit kindly, about the fact that I had a picture of bread and milk saved on my camera. It is special milk. Milk in a glass bottle that is not homogenised, only pasteurised. It is from a place about 40 minutes away. I don't like milk, after years of School Milk(there should be music to terrify you here) I have a hard time liking it any way at all, but at least this is not in a carton, and there is a refund for returning the bottle. They have yoghurt too. The bread is a cute little sourdough rye. It is crusty and delicious. It comes from the French bakery in town. You can eat it just with butter, and nothing else, it is so tasty. It was difficult to take this picture as Harki and Peri kept popping their heads up to see if there was any chance of some bread or milk for them. They had kangaroo bones instead. Yes, not only do we, as a nation, eat our

Coat of Arms, but The Labradors do too. They love kangaroo, and it has little if any fat, so it's very healthy!!!

I have spent a few happy hours rearranging and renaming my lists of blogs. At one stage Typepad was showing every single recipe I had ever posted and this prompted me to try, unsuccessfully, to fix it. In the end it righted itself. MrsDrWho spent a few happy hours sorting things out too. I think her sorting might be a World Record though!!!!!!

Posted at 01:08 AM in Knitting:Other things, Sewing, Television, The Labradors | Permalink | Comments (17)

I just love Friends reruns! Except I think by now I have watched them all so many times I have seen every single episode multiple times. Surely that can't be good ;)

My dog also eats Kangaroo, I buy the gourmet human consumption minced variety and cook it up with veges, pasta, brown rice and some gravy, he loves it. I don't think I could come at it, it's very strong smelling and I just can't get my head around eating 'Skippy'.

What a lovely post!! I love the (Is it Elgaar?)milk - sold by my little local independent supermarket (and yoghurt and cream - but not unfortunately their chees!)
Beautiful yarn - I got my lovely package from the knittery with some lovely chubby merino sock in Barley grass and thought of you straight away!

I am glad Sir Walter likes living at your house....by golly you must have every shade of green yarn at your house though.

Wait with bated breath that the lump doesn't do anything that it shouldn't.

My girls love Friends too. It was screening everyday at 7pm during the holidays & now it is on at 6pm. They can't watch it now as it's dinner time. Love your gorgeous soft green yarn - more socks?

I love the green yarn. I'm looking forward to seeing the bag for the bag swap that you are making finished.

Ahh, Friends re-runs are my friends...I can't believe there are still some episodes I haven't seen!

Glad to hear that you're feeling pretty frisky; I'll bet that you are looking forward to consistently autumnal weather with no more 30++ days!!
Lucky you and your goodies, and I'm looking forward to the pics of The Bag - methinks I recognise the pattern from somewhere.....

Ahh, you've been caught in the Friends-trap! It's a double bill for us from 5 to 6 p.m., followed by a double of Scrubs - comedy heaven!
Hurrah for the good numbers! I don't have numbers, just myself as a gauge, and I'm a bit unreliable!

I'm glad to hear you have a good report from the doctors.
I'm loving that green yarn you have too, it looks so soft and yummy!
My daughter has the DVD set of all of the Friends episodes, when ever I visit her, we watch a few together, I never really watched it much while it was on because my husband didn't like it. You did give me an idea though, I could record them on the DVR and watch them during the afternoon before he arrives home.... hum... I'll have to go investigate that option!
The picture of the bottle of milk and loaf of bread? I LOVE it!! It's just so nostalgic and homey feeling. Thanks for sharing it!

That is great news about your numbers. And I'm looking forward to seeing your purse and also the tea cozy. Here's hoping that the heat settles down (please send it this way!)

We have a dairy right by my house that has the same type of milk in glass bottles. They also have yummy yogurt, butter, sour cream, cottage cheese and chip dip.......mmmmm....chip dip.

Mmmm, really good bread, so good to just eat with butter, is such a rare luxury! Now irish butter would have to be my first choice, yum.

Friends has made me think of the first time around, when we used to have gatherings to watch it each week (Monday nights??).

Gorgeous green yarn, may have to stalk Donni.....

I didn't really have a nickname growing up but I have one now that I could do without! Because I work with a lot of PE types we all have nicknames. I am THE CAPTAIN! Aaargh!

Could there BE a worse nickname?

Lovely green yarn. I like the picture of bread and milk in a bottle. When I was a child, up to 8 years old, they sold milk in brown and white glas bottles. I loved to pop the aluminum closings. I hate milk in cartons. I only use it for my tea, and to make pudding. Nobody drinks milk in this house.
I followed your links to see beautiful yarns. Thank god they are sold in Australia, so I will not order any. ;o)
Oh, BTW, I love to watch "Friends" even though I'v seen them many times, I still like them.

How much would you charge if I asked you to knit me a funky hat and scarf?