Home Archives Profile Subscribe
I Thicket I Love You!!!
The Dance of The Seven Fails

Eat-a-cake, Eat-a-cake Baker's man, Eat me a cake as fast as you can! 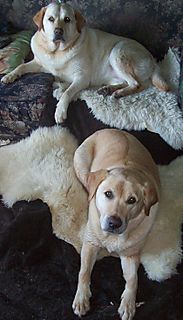 MrsDrWho gave me a very snazzy container to transport muffins. If only I actually had a real Star Trek transporter, then The Labradors would not have eaten 12 choc chip muffins. Thank heavens there was only three-quarters of a cup of milky choc chips in them. I knew I had left them outside the back door as soon as I arrived at MrsDrWho's. She consoled me with the sage advice that even if I had left immediately to go home, they would have already gobbled them up. In their defence, I have to say that they didn't damage the container at all. Pretty deft work!!! In spite their wickedness, The GardyGardeners gave Harki and Peri a second sheep skin rug: now we are two!!! They are very spoiled and love their rugs. I think Harki looks regal and Peri looks very sweet and innocent!!

We have journeyed afar on our walks and now, most days. we can make it to the Horse Paddock Car Park sign. It takes me twice as long as a normal person, and The Labradors run far afield while I trudge along the bush track. I don't think I will ever make it to the end of the track, unless I drive to the other end and start walking from there. Although the weather is sunny during the day, it can be below zero in the morning with icy puddles and cars. Not as bad as the top of the mountain in the Southern Capital where the actual temperature was -15*C last week. Now that's cold!! 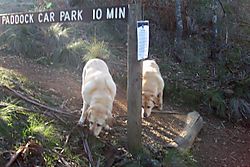 I have been knitting a little, a second Howard Hues hat and a few secret things, but mostly I have been sleeping in and lying about resting. My sister, unbeknownst to her, has given me some wool made of cotton and milk. It is Vicki Howell's Craft and I was able to buy the exact wool (I call it wool, old habits die hard, Bruce Willis dies even harder) from Ecoyarns to make the TankGirl top from Knitty. I will be making wider straps and mine will be all Kelly green. Mrs House Of, who is not a knitter, found me these great needles in the Tip shop (sic) in Adelaide. She wisely bought (old sizes) 7,8, 9 and 10s. 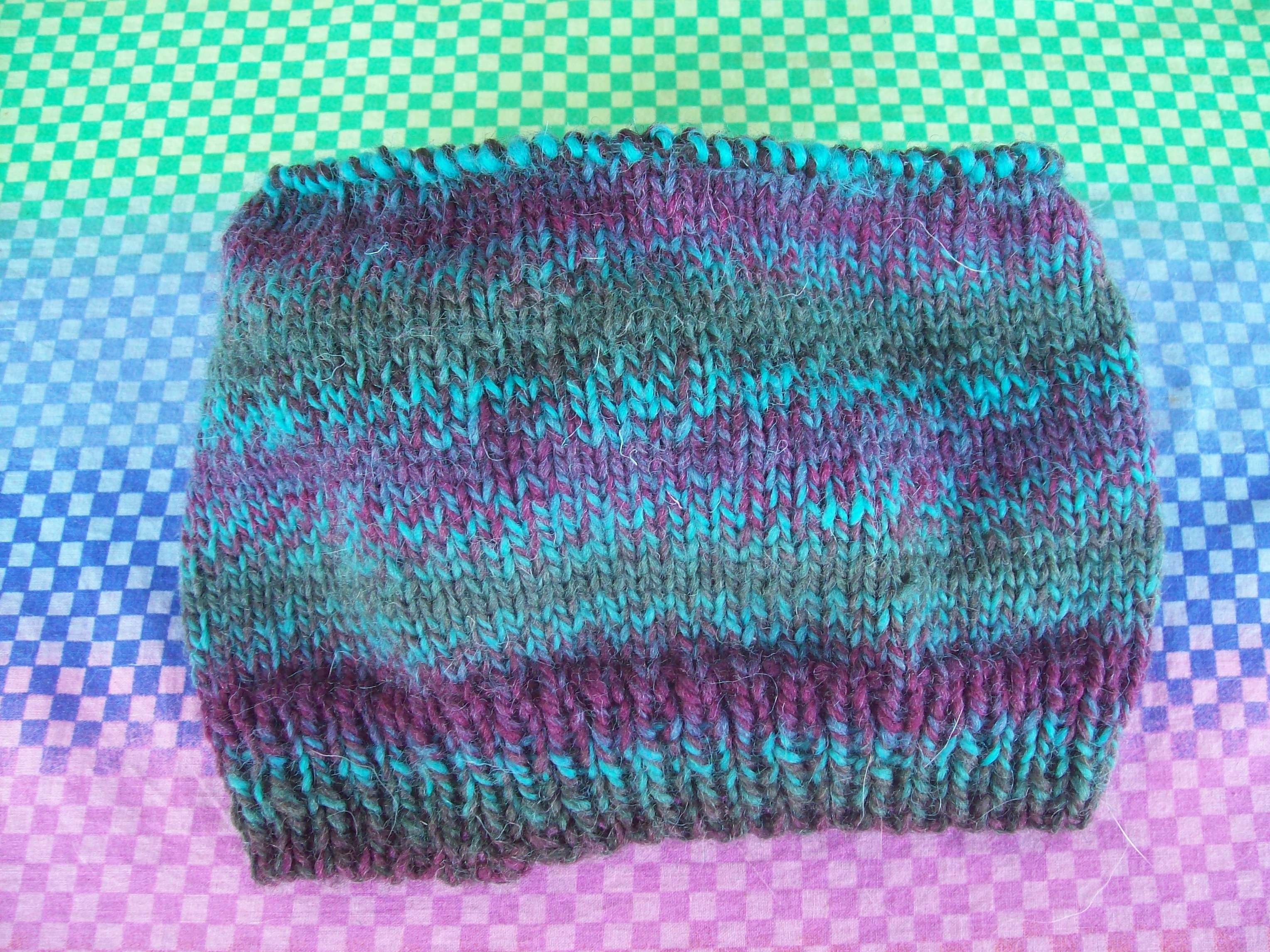 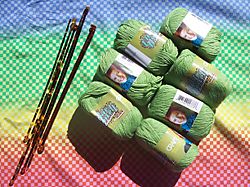 I have quite a lot of green bags, so I lined them up for a parade today. There are four missing: my emerald green backpack, a clutch with a bangle for a handle, the small dark green bag with a strip of green emu leather, and another green bag with Cs on it. Altogether I have 30 green bags. I was ably assisted by Harki, whose head is in the picture. My newest bag, from MrsDrWho, is on the bottom right. It is a lovely forest green colour and styled like a girly Gladstone bag. It holds a mountain of things too!!! I love it!!! Now I must confess I have always thought myself to be a bit of a Luddite, and I also Ted things up (HIMYM: over think things) I wondered how people replied to their comments so easily. I had to have two windows open and a mail message with the title of my post and I had to copy and paste and find email addresses etc. It made me slow to reply. Of course, in the Typepad where it says: Be notified of New Comments by Email, it didn't mean they just notified you. I thought it meant they just sent you an email to say there was a new comment. Not so, and now I am up to speed, albeit rather later than the rest of the world, and it is so much easier to reply to comments!!

Here's the Don't Croc-us scarf, crocheted in Denim colour with a 3.50mm hook. It was the perfect colour for Mrs Mauritius. 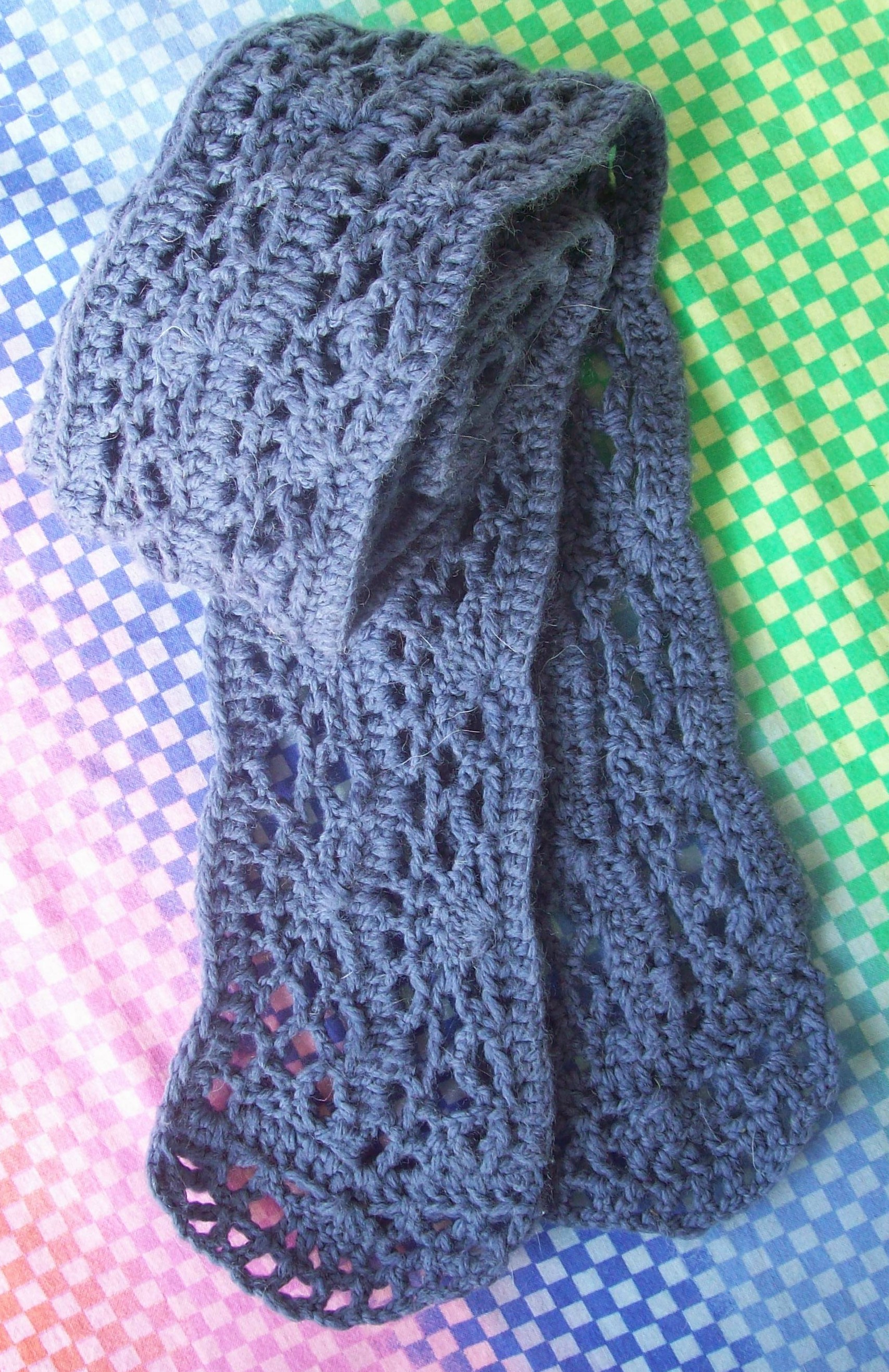 The Working Dog Beagle has been spoken for, but if you know anyone who would like the Border Collie or Australian Cattle Dog postcard and stamps, please let me know. They are going begging, so to speak!!

And so, the slightly fake, slightly unfun Olympics continue on.  Great work by all the athletes, except for the man who threw his bronze medal on the ground and stalked off in a tantrum and those who failed their drug tests. I'm listening to the Olympics on the ABC, or watching some DVDs when it all gets a bit too much. It's not as bad as I thought it would be. Today I whiled away the afternoon trying to make my camera talk to my computer, whilst cooking a chicken in my new slow cooker. It is delicious: the chicken is tender and full of flavour. I see many more Slow cooking adventures ahead for me this week!!!

Lucky Harki and Peri - choc chip muffins and a sheepskin each!

Look at all your green bags! Wow! I thought I had a lot of red shoes but I've got a way to go if I want to match your green bag collection!

Babd naughty pups (but very deft!)
I thought of you on Friday while shopping in Reliquaire - they not only have the infinite TARDIS room, but also a whole area devoted to Dr Who stuff!

Naughty Harki and Peri, although I think Joe may have done the same given the opportunity! They certainly look comfy on their sheepskin rugs! I can't beleive how many green bags you have! I thought I had alot of bags (according to M anyway)! Lovely knitting as always! :-)

I'm sure you are dying to try out your new comment response skills, so I figured I'd better leave one :-) It would be good if the pups had a little belly ache from their muffins, but if they are anything like Mackie their stomachs are iron clad (and their 'bad' food memories are very short - heh)

Right you are about the Labs! Beautiful picture! I'm thinking of putting down the sheep skin, when it's getting colder, see who's on it first. ;o)
Wow- so many bags, and all in green! The new "yarn" looks good, and the crochet scarf looks lovely.
I don't follow the Olympics, except by chance. When I was at the Dr. Office, I saw some women's soccer, oh, my how boring. I did see a picture of an angry man with his medal, what was that about? Do they still do it, using drugs? How stupid to think they could get away with it, and cheating themselves in the process.

being a luddite as well, i only just discovered bloglines where you can subscribe to all your blogs in one spot and see new posts. but it missed your last post about the postcard and if the ACD one still doesnt have a home i would gladly relieve you of it (ours is red but still a lovely picture). and your labradors are so funny, doing what labs do best! oh and PS, i am so loving the dr right now, especially donna. though i am still waiting for her to stop and say 'bovvered'?

You crochet too - you are a lady of talents. I have been trying to crochet but find it difficult as I am holding the yarn with the left hand. Love the colors of your Tankgirl - lovely.

so many green bags!!! and is that sheepskin that harki and peri is sleeping on??

Lucky you were able to get another sheepskin rug, I imagine there would have been a few tiffs if you hadn't.
The scarf looks lovely, I've been doing a bit of crochet too the last couple of weeks, I must post about it on my poor neglected blog!

Oh, lucky puppies - muffins, sheepskin and a very tolerant mama! I hope you are all well. :)

What a grand selection of green bags.