Home Archives Profile Subscribe
Eat-a-cake, Eat-a-cake Baker's man, Eat me a cake as fast as you can!
Cow The West Was Won.

The Dance of The Seven Fails 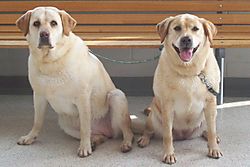 You may think I am referring to the nail biting Gymnastics, The Beam, The Parallel Bars and The High Bar, where at least seven competitors fell. I started watching with my eyes almost shut, hoping that viewing blurrily would ameliorate the horrid falling experiences. Not so.

You might also think I am referring to the seven thousand ways I am unable to make the on screen channel display disappear from my TV. It appeared as if by magic yesterday afternoon and refuses to disappear, no matter how many buttons I press or how many times I turn things on and off. You would be mistaken.

I am, in fact, referring to the Six Muffins each and almost bag of dog food eaten surreptitiously by The Labradors over the last few days. A Big Fail and we are drawing a veil over the fortnightly weigh in results. Not mentioning them. Pretending they didn't happen at all.

Instead we are celebrating Harki's 9th Birthday, a tad late, but there was a little Family Crisis in The

Southern Capital and the time wasn't right. So we are celebrating today, with The GardyGardeners!!! It is hard to believe Harki is nine. I still remember her as a tiny puppy, though it seems she was big. I called her Giant Baby Harki!!! Here she is with Tori Tompkins and Vundy the German Shepherd. There will be zucchini and celery boiled with a little stock from the chicken carcase I cooked on Sunday, as a birthday treat. Our house is a house full of Labrador Love.

I have been finishing a few projects: The second Howard Hues Hat with an i-cord loop on top and the Hues Are You? Mittens as well. These are quite good, and I am thinking of experimenting with ribbing the rest of the finger part after the thumb gusset is worked. I had to 'edit' one mitten and I ended up cutting off the cuff and reknitting it again with fewer rows. I've also worked a crocheted edging on a blanket and embellished it with crocheted flowers and bobbles. It's bobble-icious!! I love the bobbles. I want to make something that is embobbled!! I know no what as yet. I was so lucky to have everything matching and I have some Australian themed fabric to make a bag as well. 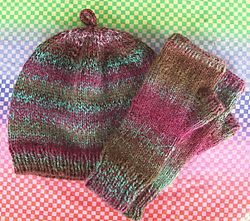 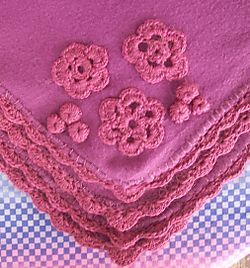 Peri is so wicked: I gave them both a bone and sent them out, and just out of the corner of my eye I saw Peri's tail disappearing into the hall!! She's a little traumatised as I clipped her nails this morning, but I used my cross voice and said 'Out!' and she trotted back through the back door.

Yesterday I went to The BSODL(TM) and found a few great fabric bargains: seersucker for some tablecloths @ $1 per metre. Seersucker is like hens' teeth here, and also some purple slightly stretchy cotton with a silvery damask pattern woven in. That was previously $19 per metre. In all I came home with 19 metres of fabric for $19.

My camera is talking to my computer again, however I still feel like I am seriously about to join the maddened Luddite throngs in Peter Dickinson's Changes Trilogy.

The Sun is shining, Harki and Peri are asleep on their sheepskin rugs and I am about to have a nap I think, it's Sewing group tonight, though I'll be knitting!!! Here's Peri being very cute and Harki who loves the GardyGardeners. 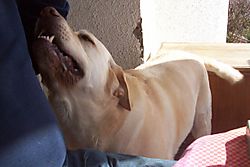 ooh...happy belated birthday Harki!!! you two doggies are so cute!! would love to give you some cuddles!!! hehehe

those mittens and hats are so cute too!!!

And I love the crochet accents on the blanket, what a great idea.

Happy Birthday Harki! She looks adorable as a puppy and Vundy looks so quizzical, I love it when Shepherds cock their heads to one side :-) I love the yarn you used for the hat ans gloves!

I love the appliqué and edging on the blanket!

Happy Birthday Harki! Biko is just as wicked as Peri! She ate Sam's food last night!!! Greedy girl! She'll run it off today though. Your hat and mitten set is lovely! Love the pup pictures. :o)

Happy Birthday Harki!! You are so cute in your pics. I love the puppy one!

Happy Birthday Harki!!!
She was a big puppy, but oh, so very cute :)
There has been fun & games at our house the last few days, I bought some new Tennis balls & found Penny nesting with the lot, I think she has some "ishues" with sharing!

Happy birthday pats to Harki (and Peri pats too, so she is not left out!)
You have been busy - we have no Doomlight nearby, so I miss out on bargains - but it's probably just as well for my CC!

Wow you've been so productive.

The hat & mittens set is gorgeous & I love the colors. You did a fantastic crochet job on that blanket. Happy belated birthday to Harki - both of them looked so cute lying in the sun.

happy birthday harki :)
is she the pup in the middle of the pic?

haha harki is the only dog i know who will consider zucchini and celery boiled with a little stock a birthday treat! my lab turns his nose up at ANY vegetables!

How did I miss this??
Happy, HAPPY birthday sweet Harki. x

I have been watching the gymnasts with squinty eyes. Then then pole vault! Such amazing opportunities for disaster!

I love your crochet edging. Bobble on!