I cannot restrain myself. Don 'Berk':Total betrayal of any positive reputation the man had. As if a chlorine based polluting pulp mill in a valley area with an inversion layer could ever be World's Best Practice. Let's build it next door to his 'forest garden' then shall we???? Oh, does every know what a berk is?? The actual rhyming slang meaning is very very rude, but I have used the term in it's normal way, ie the man is an idiot!!!

Three Cheers for Peter Cundall. Now that's your bloomin' lot on that topic.

We have been busy doing not much. It was Show Day and so MrsDrWhoand I ate the corn 'pancakes' and watched Stargate Atlantis. We only have three episodes to watch, we have devoured it. We don't usually watch the very last episode because now our memories are so bad that when the new season comes out we can't remember what happened in the previous one. So we save the last episode or two and watch them immediately before the newer season. The changes aging brings!!!

Then on Friday there were nibbles at Mr and Mrs Reno's house. MrsDrWho came, along with Mr and Mrs HouseOf and Wee Jock's mum. It was lovely to see them all and I made a delicious and easy cheesecake. So easy that I whipped up another one on Sunday for Uncle and Auntie Dutch. They came to visit, much to The Labradors' delight, and mine!! They de-blackberried for a few hours and I sent them home with cheesecake and morello cherry sauce.  Recipe but no pictures will follow. MrsDrWho are you reading this?? I am whipping one you for you too later in the week too!!! 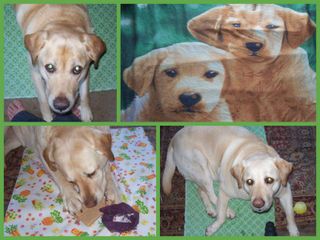 Harki and Peri have been helping me with some sewing again. I was making a toile for some drapey trousers. Well actually I wasn't for quite a lot of the time as first one Labrador, and then the other, came to lie on the fabric. They have a lot of rugs and blankets of their own, one that MrsDrWho gave them that even has two lovely Labradors on it.  But when they are asleep, everyone 'nose' why I love them!!! 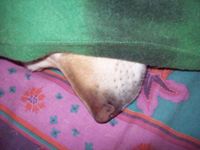 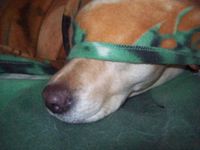 For Kate, whose knitting hopes were dashed last time, here is some actual knitting. The Waving Lace Bamboo sock has made it to the foot. I did knit three whole repeats incorrectly on Thursday so I had to unravel and reknit but I have made it to the foot and it is plain stocking stitch sailing from here on. It has been hot, 24*C and so the time for knitting anything large is fast approaching. I need to knit a few tops, I have the milky cotton and the corn to do so. 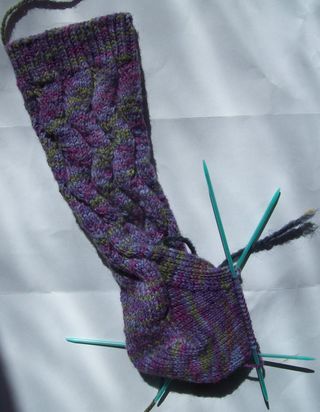 Yesterday afternoon I sat on the couch and finished clearing up the DVD HD. I had 28 pages, and at 6 per page that's 228 programmes. I have it down to just 18 x 6 now.

The BlackSpot of DoomLight(TM) is having a 20% off sale today and I am debating whether to go or not. There will be no wool, and I have lots of fabric, but maybe some embroidery thread and zips??? I will see how I feel a bit later on.

Oh when we were shopping on Saturday Miss HouseOf, who is four I think, spent all her time finding me green things. She has just realised I like green with a vengeance.

I found a potential husband, to her utter horror. 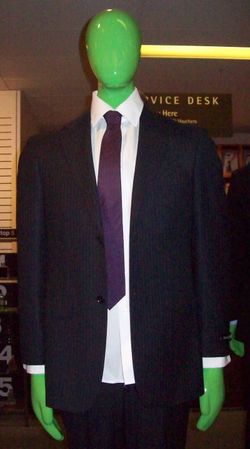 Some people are posting every day in Blogtober(sic). Not me. But I might have a sock or two finished and some sewing as well later in the week. Here's hoping.

The most important thing here is the order in which you progress. This makes sure that everything is set or cool at the right time.

So, place the juice and gelatine in a container and microwave for about a minute. Stir to make sure all the powder is dissolved and then sit the container in a larger one of cold water.

Now line a 23cm spring-form tin with baking paper, mix the butter and biscuit crumbs and press firmly into the base and refrigerate. The different amounts are because it just depends on the tin you use, and how thick you like the base.

Now whip the cream and set aside. Beat the cream cheese, lemon rind and sugar until smooth and then pour in the cooled gelatine mixture. Fold in the cream and spoon into the tin, smoothing the top. Refrigerate for at least 4 hours.

To make the cherry sauce, strain almost all the juice into a pan, add sugar to taste and bring to the boil. Mix the cornflour with the reserved juice, Remove the pan from the stove, stir in the cornflour mixture, and then bring back to the boil, stirring, for a minute or so. Add the cherries and cook for a further 2 or 3 minutes. Cool then refrigerate and serve drizzled generously over the cheesecake.

I'm first.
I can't believe it!

I braved the local BSODL & there was surprisingly still a lot of yarn left & it wasn't as busy as I had feared it would be, I came home empty handed, though I tried my best to talk myself into some Moda Vera Bamboo Cotton for a Sahara, they just didn't have a colour that spoke to me - no green either!!

aww...sleeping dog pictures are always so adorable. anyway, i laugh so loud when i read:

"I found a potential husband, to her utter horror."

you are so humorous!!!

I'm quite taken with your potential husband!! Did they have any in red?

Look at those noses! You can't be mad at them for sleeping on your sewing when they look so cute!

your potential husband made me laugh out loud!!!! At least he wouldn't drive you nuts with too much talking!! He looks like the silent type!!!

Berk has been on my bad list for years - he bags out weed scientists (of which my husby is one)an those who campaign against environmental weeds, and told people to under no circumstances wash their car on the lawn. Boofhead.

Ah, those noses! Very cute. I say, go for the green husband! Better than what I've got any time! ;o)

Mmm, the strong, silent, *green* type. I can say this much, he won't make a mess around the place, want dinner to be cooked and he certainly won't pee all over the toilet!
Oh Don! Mebbe you have the Highest Ideals but really!

yeah berk is berko - he says its not a complete compromise of integrity, which i guess it isnt when you dont have any! mr green looks quite fetching. i do like the strong silent type.

Agree with you on 'The Berk'! We don't want a pulp mill up river from our wee city! I hope you don't mind - I've tagged you in my blog - gotta share that love around!

I just did a hit and run post with lots of typos - bleurgh!

Glad you are feeling wellish - I like the potential husgreen! Very stylish!

I think the Green Gentleman looks like the idea partner; silent, nice to look at, a convenient place to put stuff.
Love the photos of the labs - very cute!

Regarding your cheesecake recipe - what is cornflour?

I've copied and pasted the recipe prior to printing it - even without knowing. Probably I shall substitute corn meal ... and then I will try ordinary flour.
God hates a coward, eh?