I must be honest, cherry tree, axe and all that: It was MrsDrWho's birthday in the first Roman Emperor's month. I gave her the sock wool. It is the knitting that takes the time, and I had a few interruptions. I have had no interruptions once I started The Crocodile Rox Socks. I started them at the weekend and I am almost to the toe on Sock #1. I did have the intentions of making the pattern irregular, but I couldn't bear it. I made a nice symmetrical scaly pattern that interlocks like brickwork. When I was making the gusset decreases I continued the pattern but stopped adding the end scales until there was only one left in the middle and then I ended that too. The wool is some Opal Uni in Apple. I have had it for ages and I'd forgotten quite how hard it feels on my fingers when I knit. I know it will soften up once I wash it. We went for a walk this morning in the cool. It was 28*C inside yesterday so the cool overcast morning was a relief. Harki was a good girl as usual but Peri found something horrid to roll in at the start of the walk. When we came home she had to stay on her lead and then be washed with the hose until she was clean. She doesn't mind too much. Harki has been playing with all her toys: she's an equal opportunity Labrador. Here she is bringing me her Two Toy, made of a Squeaky Furry Bone inside a Tyre. It is very good and must be Thrown and Fetched to within an inch of its life. Apparently. 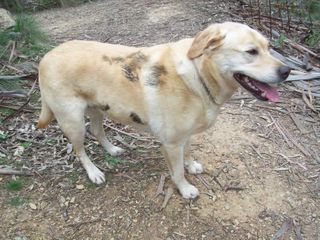 I watched a slew of Burn Notice episodes last night while I was knitting. MrsDrWho has one episode on her HDD so I have to ask her very kindly to lend it to me so I can watch it in the proper order.  We finished watching Stargate Atlantis The Fourthly Season, all bar the last episode. It wasn't my favourite season, I don't think they knew what to do with Colonel Carter. We are going on with B5 while we wait for Blake's 7's final season to arrive.

While MrsDrWho arranged her Chr*stm*s charm squares seemingly endlessly I have just put my Moda Merry and Bright squares in some rows. I am going to sew them together to make a Chr*stm*s quilt of some description, The colours are not traditional ones, but I am past caring about that. 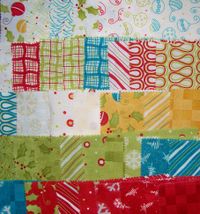 I have a pile o'patterns and I am going to make a dress  and a skirt or two. If I like the dress I will make a slew of them. My word de jour is 'slew'. Thus far there have been very few green tops in the shops so dresses would alleviate the lack of appropriate 'top-age'. 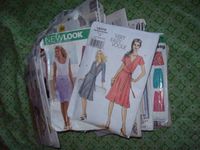 I didn't get any sewing done on Friday as there was an email for assistance with the editing of the Science Talent Search power points from You Know Who. I am a hard taskmistress!!!

It's so late now I think I will plump for a skirt rather than a dress. Far less to go wrong with a skirt!!!

Those socks are devilishly gorgeous!

I like the crocodile sock very much!! I'm thinking about knitting a slew of single socks for summer!

I love the stitch pattern on the socks.

There's always one rolling around in stinky stuff, isn't there, usually the one who doesn't like having a bath!

why oh why do these dogs of ours have to roll in the most dreadful stuff they can find??? Ruby loves to say "hey look at me I really am a green dog now I am covered in Wallaby and Possum poo!!"

i wonder why do doggies like to roll in horrid stuff. tsk tsk.

anyway, those squares are so colourful!! i'm sure the quilt will be fantastic!!!

Mia likes to roll in fresh bird poo on the oval. Especially if she can spread it on her head & the back of her (floppy, maltese) ears. I call it 'putting on her perfume', and once found an explanation that it is old hunting instincts coming out in your dog - to hide its own scent by rolling in dead stuff.

Oh, well, Mrs Dr Who can consider my previous comment as an advance for next year! Nifty socks - I love the stitch pattern.

There's nothing quite like the smell of a mucky dog, is there?

I adore the crocroxsocks and want to make some of my very own! (what pattern did you use?) I also am thinking of topage and summerage and should sew a slew of stew sorry stuff!

Kim out of hospital with enough metal staples in his neck to make Herman Munster very jealous!

The design of your crocodile sock is fantastic & I like the look of the tapering scales. Very clever!