Last Friday, when we went for our usual walk, The Labradors 'lost' me for seventeen minutes. They were running up the hill, I was walking on the path and they were out of sight.  When I reached the turn back point, they were still nowhere to be seen. I walked for the next ten minutes with that horrid feeling in the pit of my stomach. I called them and they didn't come, I spied flashes of gold, but it wasn't them. I catastrophised by imagining they had plummeted over the cliff into the Gorge. (Never mind the were up the hill!!) When I was 2 minutes from the car, there they were, running up the track towards me. They were so puffed out and all wet because even Harki had been in the creek. I think what happened was they thought I had turned back and then they waited for me at the gate. MrsDrWho has pointed out that it was me who was lost, there were two of them, together, and they knew where they were!! I was so happy to see them that there were big hugs all round. 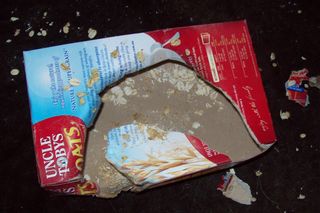 Peri has been 'shopping' in the grocery bags again and this time she ate a whole box of old fashioned rolled oats. They must have tasted awful, but she didn't seem to mind. She opened the box so nicely. She also hid the left shoe from two pairs of walking shoes. I foolishly wore a new pair and I am paying for it with two blisters the size of  50 cent pieces. I bought these really great Blister bandaid things at the chemist and they are helping a lot. 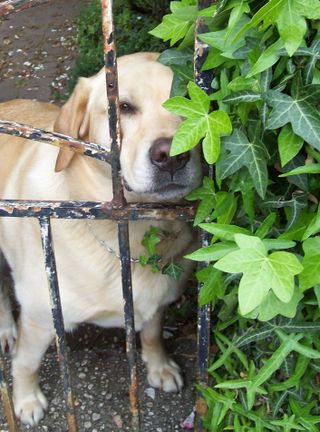 Harki has been back to see the Doctor and had her ears pronounced almost better. She got extra treats because she was shaking a little and she was very brave. I am going to start popping into the Hospital with The Labradors every now and then for a treat, so Harki doesn't think she is donating blood all the time. 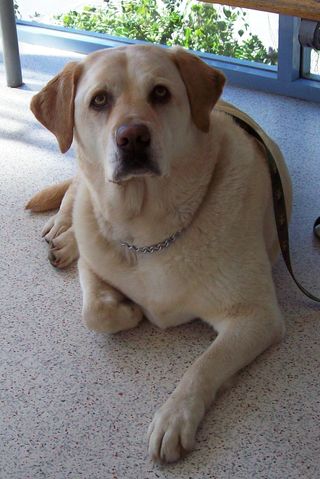 There has been sewing. I have sewed a toile for the bodice of my new dress. It is very boring to look at. I have sewed the eyelet fabric into a skirt and I am particularly proud of the side seam matchiness.  It must be lined. I have bought the lining, but I was waylaid by the need for a hat. Tomorrow. I bought some starry green fabric and I have whipped up a hat. I am not sure whether it will suit me or not but I don't care. Hattily careless am I. 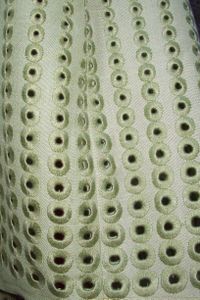 I made The Cake-In-A-Mug. More of that with pictures and recipe soon. I'm not even trying today though. I recharged my camera batteries and then the camera and the computer threw hissy fits and refused to talk to each other. Then I changed the pixel width of my blog....... Least said, soonest mended there. And I'm off to sewing any minute now after this!!! There will be a Craft Fair report of some kind I hope. Oh and I have comments to reply to. No doubt there are people sitting on the edge of their seats waiting for that!!

There may be spelling and other errors in this post, I apologise in advance.

Oh that side seam is very impressive! love the hat too, hats are on my "to do" list which just keeps getting longer but not much gets "to done"!!! Enjoy the craft Fair! I haven't been for a few years, it's just a bit too much to get around!! The last time I went I spent the day in the Potter's tent teaching people on the potter's wheel! that was fun and a very long day!!!

Love the hat! Harki and Peri both seem in good spirits at the moment - naughty Peri for food 'shopping'! I think rolled oats come in alot of dog mixers, so it probably smelt quite appetising for her! I lost Joe once at the local country park, I did panic and called him for ages, then he turned up all happily (I think he'd been rabbiting!) Hope your blister goes soon. We've just had our first snow of the winter!

Naughty Cindy for not reading the minds of the labradors and waiting for them where they thought you were!

Hats - yup should make a couple this summer but when?

I'm not surprised you were worried when the dogs didn't come - I remember thinking I'd lost my cat (when she was just a very timid kitten) - I turned the house upside down looking for her, getting more upset all the time, and then I found her hiding in a most unexpected place - huge sigh of relief!

What a big scare your gorgeous two gave you, they had better not do it again. Dry rolled oats, her stomach must have been bursting.

I know why you like my new bag............it's GREEN. I love testing my bags, I use a different one everytime I go out, they get a lot of comments and most people can't believe they are knitted.

Love the eyelet fabric, what a great find. I'm green with envy!

Look at that innocent face - you'd think butter wouldn't melt!
Fingers crossed that the computer and the camera get over their recent "marital" difficulties.

hehe. seems like Peri likes shopping!!!! i always put away the groceries ASAP even before he starts nosing around!! haha.

That is so Essence of Labrador to eat a whole box of uncooked rolled oats! Love the hat - I made one this week too, but for a Little Person that I cant blog yet. Sewing hats is like turning heels - makes me feel so very clever!

That's a funny story about losing the dogs as I agreed with MrsDrWho that you were the lost one! I just can't believe that you just whipped up a hat because you need one. It take me ages to shop for a hat that will fit me.

I think the labs knew eactly where they were - in the water because they are labs!

love the sideseams and hat - not going to craft fair this year - but maybe next! and when are you coming to visit and eat cake and biscuits and get mugged by children and drink champagne in the garden? Hmm?

oh cake in a mug! i can't wait! i am glad that your labradors stay together when they run off, it makes it easier somehow.

Oh those four legged bundles of joy are truly naughty monsters giving you so much to worry about. So pleased that they returned and all is well.

Do hope your blister heals quickly too.

I agree with all the other commenters, you are indeed a clever one to be able to simply whip up a hat on a whim. I may just try my hand with a little sewing for the kids for xmas - will not be a hat though.

Ohhhhhhh I hate that sinking feeling in your tummy when you can't find the cat/dog/child. I am so glad you found your girls all safe and happy.

oh i hate that 'where are my dogs' feeling, but i am pretty sure it is almost always because there is something foul to roll in or some rubbish somewhere to eat. like leftover rockyroad in the after party rubbish in very thick black garbage bags which miraculously come open all by themselves and make cattle dogs (who are really labradors in diguise) very ill!

Oh, no!! I can imagine how you felt! A huge sigh of relief to know all is well. x