Written Monday 6th October
There can be no clicky links today because The Typepad Compose Page is the only place I go on the whole Internet that has the Little Yellow Triangle Of Error in the Task Bar at the bottom. Nowhere else. Just here. And when the Little Yellow TOE appears I can't make clicky links, or make things Bold or Italic, and there will be no pictures. I might be able to came back later and put some in. Who knows????
There was a Big Yellow TOE this weekend when I went to the ATM and I had No Money. This is not unheard of, but I could not for the life of me think where I would have spent all my money, so that it would not appear in my Online account. Online it was there, but not at the ATM. I felt slightly sick all weekend, and moreso this morning. I couldn't tell the Credit Union because my card wasn't lost or stolen and neither had my computer been taken over or my phone hijacked. I did email, but no-one answered. When I was finally able to contact them this morning the lady said that my money was definitely there, but there had been ATM malfunctions over the weekend. Good news, but I had a horrid 40 hours. MrsDrWho lent me some spending money to tide me over so I could feed The Labradors fresh celery and zucchini!!! 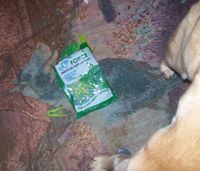 Personally I think Peri is taking this green food thing a bit too far. I bought some new Environmentally friendly, non rusty, recycled, very pretty all green pegs. They were in a crinkly bag. Peri thought they sounded like food, and so she decided to give them a whirl!! It seems they were not good at all. Amazingly she didn't break or chew any and I have them arranged in coloured pairs, dark and light green, now. She also had the tape measure: perhaps I should call her Katt. Except Peri didn't break it!!! Harki was bitten by an insect of some kind on Sunday and she had to lick her muzzle and drink lots of water and be very restless. She must put her nose where there are ants, but she's not too allergic. It's usually 2 hours' worth. 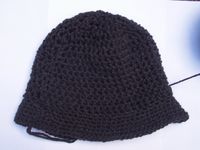 I am crocheting Sharon a hat: The Nubby Brimmed Cloche. I have finished it but it isn't right. MrsDrWho modelled it. She looks wonderful in every hat, whereas I look lovely in NONE, nevertheless this wasn't flattering. I checked on The Ravelry and most people seem to have doubled their wool. I am using 12 ply, so 24 ply here I come. The crown is all half trebles, which are boogelly, but the brim is double crochet, which I like. So I am unravelling it, and starting again. 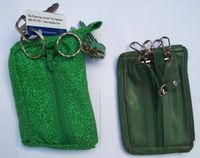 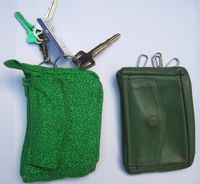 My keycase had deteriorated to the point where it was falling apart so today I made another one to be going on with. My new one isn't leather, it's a green fat quarter, and it worked out to be slightly bigger. I think I did scant 1cm seams instead of full ones. It works really well and I used it this afternoon. We have to carry our Licence whenever we drive or be fined if caught without it and if I am going in the car to the dam for The Labradors' walk I don't take my purse. So this has a pocket with a snap in which I can keep my Licence.
Since I can't put any pictures or make clicky links I have thrown my frock over my head and I am off to bed now. There's nothing on TV. I've watched last night's Julian Clary episode of Who Do You Think You Are? He was very funny and made me laugh out loud: really!!! I've watched The Mentalist, a kind of dark version of Psych, and that was good. And the pattern for the bamboo socks is in the car, and it's dark. Oh we have Daylight Saving. If I was a cruel mother I would poke The Labradors awake from their sound sleep in the mornings: they wake at 7-45am, that is really 6-45am. I was awake before them. We are pretty much just doing things an hour later. We don't care. We are Daylight Saving Rebels until we adjust!!! We like it once we are adjusted.
Tomorrow is Show Day. I know The Labradors would win Every Single Category if they were entered, Best Cooking, Best Pig (Peg), Best Chpping Best Dog etc!!!!! 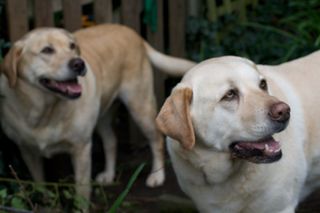 Written Wednesday 8th October
The Typepad people emailed me this morning and suggested I make them a 'trusted' site!!! I did this and now I'm up and running again although I am pretty sure this isn't why. Very weird. Now I can add some pictures and a recipe. Today I had a check up.  I have a boogelly Rotator Cuff tendon. Obviously, as MrsDrWho ponted out in her email, this is why I was overlooked for Wimbledon and not chosen for The Olympics this year.
The doctor was running  almost two hours late. I knitted socks while I waited,  but I was starving by the time I got home. I made Corn and Ricotta 'Pancakes'. They are quick, healthy and delicious. I used a mixture of fresh corn on the cob and some tinned corn I already had.  I grilled some tomato and local  free range well looked after pigs' bacon and added some greenery while they were cooking. The mixture makes A Lot.
Corn and Ricotta 'Pancakes'


In a bowl mix the ricotta, buttermilk and eggs till well combined and then add the flour, corn, chives and onion. Mix till smooth. Heat a non-stick pan to medium and add a little oil. Spoon a good tablespoon of mixture into the pan and flatten a little. Cook for 2 - 3 minutes on each side, until golden and cooked right through. Keep warm and then eat.

well I'm happy your Blog problems are all sorted!! It's a bit stressful when things go wrong with computer stuff AND bank stuff of course!!! Glad that's sorted too. I love your little shopping spree in the last post, all those xmas mags will be a must buy I think :)

arrgghhh ATM problems suck. Blog probems as well. Glad all is well. That crochet cloche is on my list too, yours looks great!
Happy show day (?)...

In the end everything works itself out one way or the other.

That recipe really does look yummy! I've got some ricotta in the fridge - I think I now know where it is going....

Our labrador, Molly, died abour four weeks ago and we are all still very sad. Your two really do cheer me up (and make me sad too if you know what I mean...)
Deb

Bet the girls were pleased you could buy celery and broccoli and other green things!!! Glad you are not broke and destitute!! Yucky feeling, I know!! Your pancakes look good....might have to try that one!! HAve a great Show Day, Im having a stitching day!! Cathy.

Bugger I forgot to tell you Saturday about the ATM thing..Yes everyone was having that problem..Adam and I were talking to a few people about it, they had gone all over town and NONE worked. I remembered to tell Cathy Saturday but forgot you! Sorry :(

LOL dont name her Katt!! I didnt eat your measureing tape...I just....played with it..

Technically stuff doesnt like me usually, they dont last long in this house without going kaput..

So pleased your blog problems are sorted, but sorry to hear about the ATMs. What a nuisance!

Your recipe does look delicious and healthy as you say. I think I might give that one a go one lunch time soon.

I am making ricotta and corn pancakes for Sunday lunch for certain! Two of my favourite foods together....yummo.

I'm sure the Labradors would win everything, esp Best in Show and Best in Puddles!

Are yes, the TOE is scary - Toni came to visit yesterday and we have plans for you and the gorgeous ones......

The ricotta & corn pancakes look yummy - must give it a try. How clever of you to make your own keycase & even with a pocket for your license. You are the best!

These pancakes look too yummy - going to give 'em a whirl tonight! Just realised I replied to your comment over at mine but now realise there is such a thing as a no-reply thingo so I don't know if it went through - this blog stuff is all too new - anywaysy - in case you didn't get my reply -I got the labels online here http://www.apparellabels.com.au/ they take a little while to get to fair tassie - about 3 weeks but they are very cool! Happy show day! Man am I long winded today!!

I'm surprised that naughty Peri didn't decide to munch down on the clothes pins.

The recipe sounds yummy! Love this kind of cooking, quick simple and delicious.

Your corn pancakes sound yummy! Esp. with the fab bacon..mmm (if it weren't for the pancake batter resting in the fridge right now, I'd be tempted to ignore the memory of muesli and announce a bacony-brunch!)
::gasp::!! I just realised!! No sock pics today!! erk! after telling us you had two hours of sock knitting at the doctor's surgery waiting room, setting us up to expect a glorious knitting visual feast - and then all hopes collapse, to leave us confused and disappointed, sockless.....

Pleased your ATM worries were unfounded although it was not good to have no access to the necessary evil - MONEY.

Very odd about the blog thing! The cloche hat looks very 1920's - lovely!
Never mind dogs thinking stuff that crinkles is food, I do that! :D