I have been on a bus trip. The Leukaemia Support Group Bus Trip was never going to be like The Blues Brothers' mission, I have never even seen their film. But it was a bus trip nevertheless. I almost didn't make it. Harki's arthritic hip flared up again last week after a lively Sunday with visitors and then a week of wildly fluctuating weather and air pressure. She was really hoppy the night before and didn't even want to walk up the stairs. I gave her one of her tablets and the next morning I checked she was happy, had eaten and would come up the stairs, and then I decided it was OK to leave.

I don't want to make this like the interminable trip reports some people make their classes write: I won't say the time we left, who I sat next to or what we talked about on the bus!!! I didn't take my knitting as it seemed a bit rude to knit while talking, even though I can do that. The rain teemed down all the way there and when we arrived there were fibreglass cows!! Here is a small selection: schools decorated a cow as part of a competition. 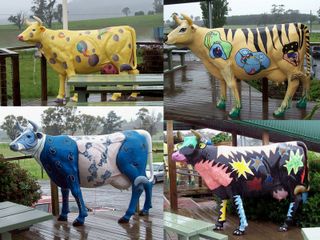 The esteemed Jane Bennett talked to us about cheese and the cheese making process and then I went twice round the tasting table!! I did learn something horrid: if you raise the temperature of the cheese too high when it is in the vat, you kill it. The dead cheese is churned and swirled and then made into those plastic kind of cheese slices and that cheese in a blue box that can sit on the supermarket shelf and not in the fridge!! Eeeew. I also learned that their Wasabi cheese was first made as a joke and now they can't keep up with the demand, they have to cut leaves from the growing plants in order to add the needed colour. Wow!! At the moment they make about 10 tonnes of cheese a week. Ashgrove make cheddar the old fashioned way, and the cheese with rinds are lovingly tended by a specialist worker, no wonder their products taste fabulous. 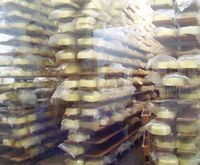 Then it was on to The Raspberry Farm where we had lunch. The most delicious platters were placed on the tables, and we drank fresh raspberry 'mocktails' and then feasted on the desserts. 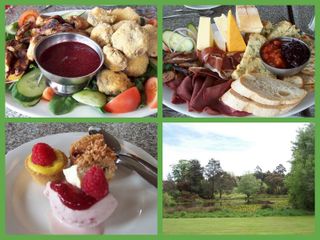 The rain cleared up as we ate and we went back home in the Sun. Jo, our wonderful organiser, did a fabulous job. I was meant to be going out for tea, but I went for a little lie down at about 3pm and the next thing I knew it was 8pm!! Here's the outward and then the inward weather. I see sheep, people. 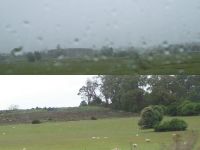 There has been some knitting, some secret, and some boring to look at. I am on the last 10 rows of the Laminaria shawlette. I skipped two of the blossom repeats as I was worried I would run out of wool. I still may, but it is just a boring green blob at the moment. The secret knitting is still secret. Instead, I can show you some Hmm Hmm* embroidery I have been doing. I'm quite pleased with these. I have made six so far. Technically they are buttons but I will try to glue on a badge backing so they can be worn as brooches. Tomorrow I have to do a repair and alteration to my friend's dad's waistcoat. She asked me a fortnight ago and suddenly we are meeting for Sewing tomorrow evening. Where does the time go?? 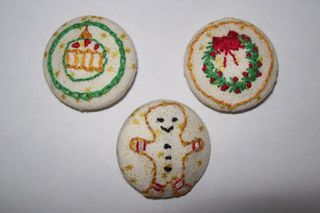 On Tuesday I had such a busy day that I had to have an extra rest today. First we went for a walk, then I made an appointment for Harki to see The Doctor then I had to get ready for my appointment. I typed up a quick precis of the last year, medically speaking, and then spent an hour and a half-ish waiting to see the very nice doctor from Melbourne who had come down for the Bone Marrow Clinic. It was a short and sweet meeting, and I don't have to see him for a whole year, unless things go pear-shaped again. Then it was off to the Knitting Coven, then home again to fetch Harki. And wrangle Peri inside. She ran up the steps to the garage and I almost had to lasso her!! Harki had a special injection for her hips and some tablets. Then it was home again and then out to buy some groceries and dog food. And it was hot.

This afternoon I was going to MrsDrWho's school to help sort out her myriad Hmm Hmm* resources. I went for a little lie down at noon and the next thing I knew I was waking up and it was 2-54pm. I arrived at her school at about 3-20pm with a sleep squooshed face!! Luckily 'the country' is not too far away from here. Harki and Peri were very confused, all this sleeping and waking up and no breakfast??? 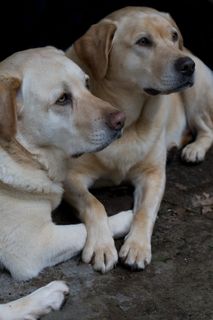 Some people thought I had been working really hard to make the bags etc in my last post. I have to say that Auntie Dutch's birthday was 6 weeks ago and I had been working slowly on her presents way before that. I am usually beavering away on two or ten things at once. Well now all my tenses are wrong because it is the next day now. I am not going back to fix them, you will all have to pretend it is still yesterday. I insist!!! I am off to bed, perchance to sleep, and then tomorrow I might have a go at answering some more of my lovely comments!! In between waistcoating. Oh and if you are near a Good Taste magazine, you must buy it, if only for their new take on The UnGingerbread House idea: it's fabulous in a very kitch kind of way. It's not your sophisticated gift house. And now I want to say 'Never look a gift house in the mouth'. It's definitely time for bed!!! I'll post about that next time.

*Hmm Hmm: it's kind of the rule not to mention Chr*stm*s until December (it still is in a certain classroom) I may already have accidentally mentioned it, but I think I got away with it.

heh heh, I like the Hmm Hmm Rule very much!

I love the cows at Ashgrove and point them out to the children every time I go past.

The weather has been weird to say the least!

Have just started (in the last 24 hours) to wake up to the fact that you know what is only 4 weeks ago. This years is not a knitting one though!

oh lucky you Cindy going to The Raspberry Farm!! I have never been there but whenever I get to the Craft Fair I make a b line to their caravan for a big fat icecream!!!!!yummo

The puppies look very confused! I love how they're comforting each other.

Mmmm... cheese. And thanks for not mentioning Hmm Hmm - I'm racing to get my mum's Cricket vest done in time.

Looks like you had fun and lunch looks fab!

What a great trip, just nice to get out of the house and see and smell something different. My two dogs are also canine waste disposal units, Harki and Peri are not alone. This morning Ruby had her usual brekky and then decided to rip into a big bag of blood and bone, yummo. Lucky they get to go for two walks a day or they might be tipping the scales too.

That's a nice trip. I love visiting a cheese factory & the great cheese tasting. Your embroidery buttons look really nice. I am still trying to face the fact that Ch....mas is next month & I have done nothing!

I heard some Hmm hmm carols playing at the shopping centre a couple of weeks ago, it just seemed very wrong to me.

What a busy day! Good news from your doctors though.

Your trip sounds delicious, it's made me hungry just reading about it :)

Those cows are a hoot! I think mentioning the C word before Dec 1 is ok...just don't put a 'merry' in front until then. Actually even that would feel a little too soon for me!

Oh boy, even the mention of hm hm is too much for me at the moment. I have LITERALLY done nothing. As in really literally as opposed to the way people usually use literally. I HAVE DONE NOTHING!

Those cows are just weird if you ask me!

The cheese and raspberry day sounds yummy. Glad you had a good report from the Dr.

You are keeping very busy!
We saw the last raspberries of the year here last week (we think - I thought they were done a month ago but some keep popping up at the farmers' market).

Your trip looks great, we have a comp. going in the Illawarra at the moment with Picasso Cows, the children paint them with some environmental message pictures and they will be on display in Hindmarsh Park, Kiama in January for about a week. Congratulations on expecting a grandchild, will it be your first?

Those cows are so coooool. I could do with a few of those in my paddock. I hear you are knitting the laminaria? If thats true how are you finding it? That is one I would really love to knit. I think lace has become a new passion. But maybe with this cold snap I should knit my little boy a doggie jumper since his hair cut (fluffy tail and all). How are the labs?

That sounds like the BEST bus trip. As I often say, dairy fat is my favourite flavour. Raspberries might come in second - although red wine is up there too.

How wonderful to go to a cheese factory - I am so envious. But I thought that cheese in blue boxes was made of plastic!