There Will Be An Answer: Leg-a-cy

I didn't know that Legacy was started here, in The Apple Isle, by General Sir John Gellibrand. I was lucky enough to be grown up when my dad died 25 or so years after he left the Navy, so I didn't need Legacy, but they still look after 1,800 families here in our State alone. There are only nine children, the balance are mostly war widows. Yesterday I also learned that at at one stage on the Somme in WWI the field hospitals received one victim per minute for over 56 hours. I can hardly comprehend that number of people being injured or killed.  No wonder we need to remember, or rather, never forget. I checked out my dad's war record at the Navy archives. It is very strange to see his name there on his certificate of service. 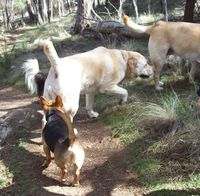 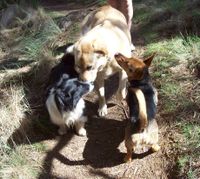 Harki and Peri met some recent acquaintances again on our walk. We met Kimba and Larry. Kimba is black and white and sensible. Larry is brown and runs like a greyhound, so consequently he and Peri get on like a house on fire. After they walk on ahead with their Aunt, because they are faster than me, Larry doubles back, and before you know it, there he is again playing the daredevil racing game with Peri. They both go BeserkersBonkers!!! Harki and Kimba have a genteel sniff, and are politely friendly, but there's no mad dashing about.

Today it was very hot indeed. I was inside till after 2pm and so when I eventually went out I nearly passed out from the heat. It managed to get to 28*C  and so when I came home we broke out the paddle pool. It was like a heat emergency. Peri and I stood in the  water and she dug holes in it and ate the hose and ran around in tiny circles. Harki had a little play but she doesn't like getting splashed so she went and sat in the back door way and stared at me, hoping I would come and play with her. She's slumped on the floor next to me, panting, and so I have sprinkled her head with soda water. Seems to have done the job!!! 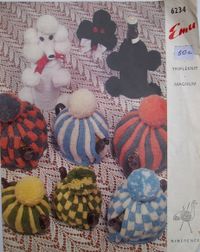 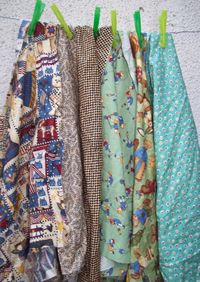 I finally managed to take some pictures of some patterns and fat quarters I bought at The Craft Fair.  I can't wait to knit my own Camelot and I'm pretty sure someone I know needs a poodle. My Nan had one on her soda syphon. I loved it. I think hers was crocheted though. 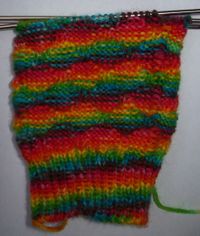 I have started the Rainbow Croc Socks for MrsDrWho. These are in the delightfully spirally rainbow wool with extra green. I'm knitting them with 64 stitches just to check the pattern is correct. Also, I needed something a bit easy to knit while I was watching the last of Season 2 Babylon 5 at the weekend and then at The Knitting Coven on Tuesday.

I bought the Christmas edition of Family Circle Magazine today. I could have almost hugged it to me and done a little dance (and I would have but for my boogelly feet!!) It has lots of excellent cooking and craft and it makes me remember how much I miss FC. I have already made a list.....

I have to be at the hospital at 8am in the morning for a blood test. I am NEVER awake that early and I will have had to dig out my chewed (by a baby Labrador) timer to wake me up. The Labradors will wonder what is happening as it is Going For A Walk Day and I will be sloping off without them!!!

Somewhere, lately, I saw Pink Jelly Lamingtons on a blog and so I needed some. I made them last night and we had them for morning tea with The GardyGardeners. Yum. The Labradors had the end of the jelly on baby spinach, raw. They ate it all up. How strange!! Peri is a bit flummoxed by the whole jelly situation: Is it a liquid or a solid?? Should I eat it or lick it?? She didn't muse for too long. Harki had it sussed out from the get go.

Make the jelly by dissolving the crystals in the boiling water, mix well. Then stir in the cold water, cover and put in the fridge for 2 or 2 1/2 hours. You have to check. The jelly should be set, but still wobbly. You'll know it is right if it sticks to the cake.

Anyway, while the jelly is setting, cut the cake into evenly shaped fingers (rectangular prisms) When the jelly is ready, put a piece of cake into the jelly and roll it about a lot until the jelly coats the cake in a thin layer. Then roll the cake in coconut till it is covered. Put the completed lamingtons in the fridge. This is quite an important step. I think you should serve them cold, straight from the fridge. I made nine and we ate them all. (The Labradors had a small one each. Very bad, I know, but they only have a treat once a week!!!)

Ohh Jelly lamingtons they were a specialty for all get togethers and family always waited for Nanna or in other members cases Aunty Mona made them. We always use port wine jelly but now I will have to get some made again.

This is the most awesome post - jelly lamingtons! I'm making some, I'm hankering now. and knitted camelot - inspired! What a score! and my Nan (Dinny) used to buy me the Family circle when I was a girl as it had the coolest kids puzzle section in it. I may just have to pop out and get the Xmas version. I take what you mean about the market - hadn't thought about it that way. Will have to see how it goes...

Legacy does a great job and I've been really impressed with how they've helped my mother in the last few months - not monetarily but in terms of information and support.

We had a poodle cover on a large talcum powder container in the bathroom when I was little. It was mint green.

I've been reading early today, and had to come back to comment. The Labs must be so excited and tired after meeting with friends on their walk! Nice fabric! The pink jelly Lamingtons look very yummy! I like all kinds of cakes with coconut.

Would you believe me if I tell you I have never tried lamingtons before? They're an Aussie thing rite? Haha.

Those tea cosies are so cute. I should make one for my green teapot one day :)

My kids are a bit the same about jelly - not sure if it's a liquid or a solid!

Hope the test is fine and your numbers are up up and away.....!

I'm pretty sure we might have had one of those poodles at some stage...or maybe I've got the pattern!

I wonder if I could make red jelly lamingtons?

I'm with RoseRed - red jelly lamingtons would be even cooler.

I'm going to look out for the christmas Family Circle after that recommendation.

oh yes I TOO miss Family Circle! It was great and was such a shock when it finished. I love your bunny pencil cases Cindy, so very cute. Can't wait until you start knitting Camelot! That will be soooo cool!!!

Love your lamingtons!!! my Gran Lillian used to make them she also made flummery which is carnation milk and jelly whipped together I can't remember the recipe but my brother and I loved it. I wonder how many things you can make with jelly? Good luck with the tests.

Love the spiralry rainbow sock. I know what you mean about early morning hospital visits - I had a blood test yesterday at the hospital at 8.10 - my first finger prick testing and it was a breeze! Hurray! They managed to get some blood out!

Lucky MrsDrWho getting those socks!! I hope your tests go well Cindy.
I just had Daisy clipped today so she can cope with the heat better up here. She looks a bit like a skinned rabbit now LOL

Oh no!!! Skinned rabbit sounds awful if you're a bunny hugger doesn't it. I meant it as a figure of speech & not that I like to see rabbits skinned or anything!!

Knitted Camelot! I didn't see those at the fair.

The heat was interesting yesterday. Already the kids at school were complaining! Never happy!

I hope you made it to your test - it should be over by now all things going well.

PS I made a sock tote!

The lamingtons look yummy. This is one of my fav cakes. Wow 28C is hot for Tasmania. We are having quite cool weather here & I am enjoying it before the heat comes.

Gaaaaaaaaaaah - it was so hot here today too although we have had a HUGE thunderstorm tonight that has cooled everything down a little. The "Danishes"are down your way at the moment so I bet they felt the heat.

Today was Pink Lady day and I quite forgot but guess what I gave the kids for afternoon tea (and I hadn't even perused your fine blog at that stage)....Pink Lamingtons! (Store bought).

Will be thinking of you at 8am.

Those socks aren't backwards in coming forwards, are they? I think the phrase "clown barf" is appropriate - I have some yarn like that, so it's OK if I insult it.

not sure as the dyer i like the idea of my yarn being called CLOWN BARF...highly offended actually..

hasnt the weather been horrid? well better now but was horrid..lol i cant believe i got lightly sunburnt friday!!

hope all your tests ended up good. early mornings are evil arent they? lol

My lamingtons are better! Jam inside and not cold - my toothy pegs hurt if they are cold... Anyway, glad to be of inspiration :-)
I've devoured all the Agatha Raisin's at our local library. I have not figured out why I enjoy them so much. I've now started on Hamish Macbeth instead.
Legacy didn't help my Granma when Pop died. He had a stroke when he was 81 so it wsn't technically his many war wounds that killed him.
It is interesting finding out family history, isn't it?

Oh my, pink jelly lamingtons....flashbacks! Btw - do lamingtons (of any colour!) have jam in the middle, in your opinion?

And I cant wait to see your knitted Camelot! My Bebbe (paternal grandmother) had a crocheted poodle doorstopper. It was teal green.

Glad to find another Babylon 5 fan! We watched it in the States 'hot off the press' when it was first released, and were instant fans.

Oh yummy, pink jelly lamningtons ... thank you for the recipe!

You are sooo lucky your labs dont need to be clipped. They are so cute when they meet other dogs. But Mine do tend to want to race off so they stay on the lead. The knit alot looks interesting. Does it have patterns for knights and dragons? I spent ages looking for a dragon pattern for my boys. Little pepper had his walk today to show off his new look. hmmmmmm poodles.

Hey Cindy 2paw! Thanks so much for popping in to say hi at homespun! It was really lovely to put a face to a blog ... and I'm still dreaming of your beautiful embroidered buttons - you are so clever! Maybe I will see you again at Niche x