Home Archives Profile Subscribe
And a Pair in a Partridge Tree
It Cane Upon A Midnight Clear.

Angels We Have Herded On High

Today I did four things and I am feeling quite tired. #1 was taking Harki to the Vet for, as it turned out, the first of a series of four injections for her arthritis, and some tablets and some multimillion dollar joint powder. Peri was locked inside and when we came home she needed a lot of consoling and patting. #2 was our Sick People's Christmas lunch. It was delicious and we played games and I won two: the How many singular words, words that no-one lese thought of, starting with the letters of the word CHRISTMAS can you find? (23) and How many words can you make from MISTLETOE? (43) But I only took one prize in the spirit of the season. #3 was Knitting Coven Christmas, where there were more lovely gifts. I made the last half hour but we stretched it out for another hour so that was good. #4 was checking on The Kittens and feeding them as MrsDrWho will be at school tonight till goodness knows when.

Here is a video with The Labradors, and beware, apparently I hum to myself as I walk along. MrsDrWho says this is because I am more than a little demented, but I (like to) think I am singing along to the radio that I listen to as I walk. You be the judge!!!! Also note Peri's obedience and see what a good girl Harki is.

Last night it was our Sewing Group Christmas and we went to a lovely cafe and chatted and ate and exchanged lovely gifts. I have made quite a lot of angels, in fact a whole choir!! 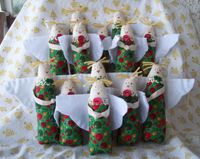 I herded them together for a photo before they were gifted away. They were inspired by the country angels from Handmade's Quick Christmas, but I have streamlined and simplified the process. I also made two heights: alto and descant!!! Here is a collage of pictures showing what I did and I will write the instructions for each step, left to right, starting at the top left. 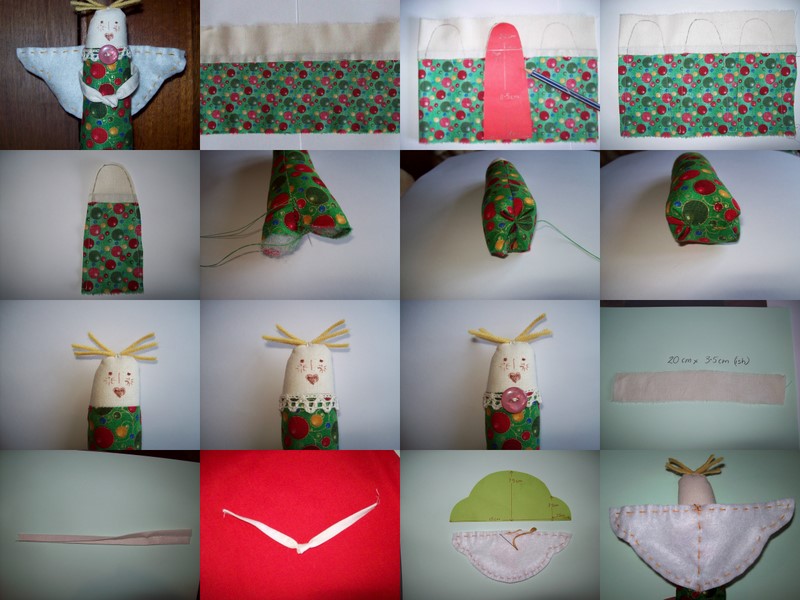 If there are any glaring omissions or you have a question, please email me!! OK, so far so good with the posting every day!! That's two down, fifteen to go. Back tomorrow with a recipe I think.

Now here's The Laminaria, blocking, I will take a better picture in the light tomorrow. 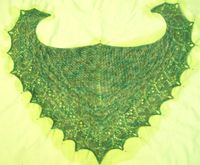 Did you see the reindeer I made MrsDrWho a few years ago in my album at the side?? The kittens have been wrestling it. I think they are preparing to bring Santa's reindeer down and get all the presents for themselves!!!

Hi Cindy, I'm cracking up here......just watched your video of Harki & Peri & poor Daisy is running around the room posturing & confused, trying to get a grip on where the invasion of her territory is coming from. She can here the dogs panting, splashing, shaking etc & it just has her flummoxed!! LOL

Were those cute angels heralding with you?? hahaha

Your laminaria looks gorgeous. I'll have to peek over on Rav & see if you have it in your projects yet for a closer look-see. No such luck :( It still looks beautiful.

Ooops that should have been "hear" the dogs!!

Hi Cindy!
I love the video ~ happiness is a labrador in a creek.
The choristers are sweet too
...and the Laminaria is divine! The colour variegations are just gorgeous ~ I'd love to know what yarn you used.
Happy Wednesday!
x

Love the choir of angels - so very sweet!

ha! im a short alto, but im no angel. very cute, all round, and what a busy pre-christmas social butterfly you are!

That was fun watching the video, thanks for posting it. I love the angels. You did a fabulous job to sew that many, they look great.
I just checked out the reindeer too in your album - wow, he's a cutie and I can see why the kittens are enjoying him.

No wonder you are tired. I will be tired too if I had to do all those things. In fact, I am quite tired these days as there are so much year end functions going on in school. I am so looking forward to the last day of school (next Thursday).

those angels are so cute!!! and your shawl look gorgeous!!!!!

The labbies are lovely and having such fun!

I love the angels - I must try to make time for some sewing soon....

You naughty person slipping that beautiful laminaria in at the end! More pics please! It looks lovely :-)
(I am terribly behind in blog reading I see!)
It looks quite green! (the bush, I mean, not just the laminaria)

Go on...tell them the process for getting the Angel choir to stand up!!!!!

I want to know the story! The angels are standing beautifully - I can almost hear their little voices. Tralalalala!

Humming?? You sure it wasnt integestion..sounds like you had the gurgles!! Perry wasnt too bad..only had to remind her once! See you Friday, Cathyx

Love the humming - and I love that Peri had to jump back in, one last time! Gorgeous girls.