Home Archives Profile Subscribe
Chestnuts Coasting On An Open Fire
And So The End Is Year.*

Here is a picture of Peri's baldness, you can see the big bare-ish patch on the top of her leg. Her hair is falling out by the handful. It's as if the environment gave a signal to the Hair Soldiers to 'Fall out!' so they all fell out at once. She's not actually bald, there is fine new Summer hair. Her Winter undercoat is falling out. 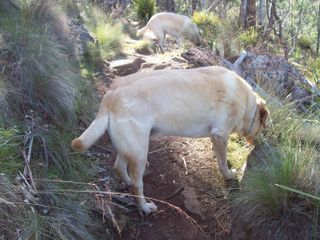 Harki is a much better girl, she's not moulting as much. This afternoon she was very hoppy so I gave her a whole tablet. I am allowed to give her tablets when and if I see fit. Doctor 2paw. Oh and speaking of Doctors, the ABC are allowed to show the BBC Doctor Who Christmas Special early. We all had to wait nine months to see the 2007 Special, but only one month for 2008's. It will be on ABC 1 at 7-30pm on Sunday 25th of January. Hurray!!! 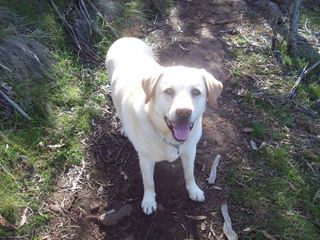 Here is the wall hanging I madefor The GardyGardeners. You can't see the beading but it 'quilted' the panel very nicely. 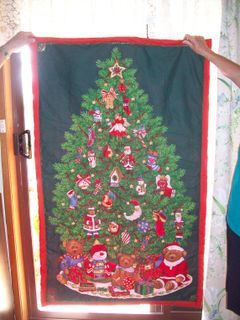 I also constructed the Leaning Tower of Star-isa: gingerbread stars sandwiched together with dark chocolate ganache. 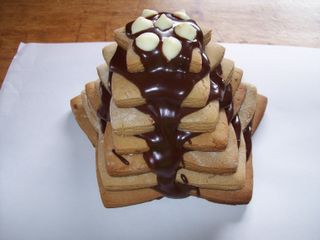 The Figgy Swirls were meant to have Cranberry Jam, but that's like Hens' Teeth here, so I managed to buy some Fig Jam and away I went. Yes, the Figgy Swirl is pictured on an Easter Bag, that's because my cello bags were too small to fit the ziplock bag of Figgy Swirls. Their only downfall is that they are a bit sticky.

The secret to this recipe is your refrigerator.  The dough must be cold, really cold, icy cold in fact!!

Cream the butter and sugar for about 5 minutes until it is pale and creamy. Beat in the eggs and then turn the mixer speed to very low and add the dry ingredients slowly, mixing till combined. Knead the dough very lightly until smooth and then divide the dough in half, wrap tightly in plastic wrap and refrigerate for at least an hour.

Take half the dough from the fridge and roll out on a lightly floured surface. Recipes say to roll it between two pieces of baking paper, so you could do that too, but I like the flour way. Roll into a square, the sides will be 20 or 25cm-ish. Spread jam over the dough, leaving a 1cm border free at one edge. Roll the pastry in the direction of the edge, the 1cm space will be the part that seals the swirl.

Roll firmly, wet the 1cm edge and seal securely. Wrap in plastic wrap, firmly, and refrigerate for at least 3 hours. Repeat with other half of the dough. My word, there is a lot of firmness,  maybe I am Nigella!!

Preheat the oven to 180*C and line the baking trays, these swirls are sticky. Unwrap the dough and using a sharp knife cut off 1cm slices or rounds. Place them on the tray, they don't spread too much and bake for 10 -12 minutes. They will be lightly brown on top, golden brown on the bottom and the edges will be firm. Cool for 10 minutes on the tray and then a wire rack.

You can use any jam, or fruit mince, grated chocolate, the possibilities are endless!!

OH! That wall hanging is so adorable! Really great job! I am again very far behind on my reading.. but am trying to spend a few minutes each day catching up with some and at least commenting to wish a Merry Christmas to all the bloggers I love to read, so "MERRY CHRISTMAS" to you and Happy New Year too!

Your gingerbread Christmas tree looks beautiful! The wall hanging is lovely too...and thank you for the recipes. I'm going to try the Ravelry no~bake biscuits this weekend. I've just started Christmassy things at home, now that I'm on holidays, and have spent the last three days crocheting snowflakes ~ fun!
Please give the labradors a pat for me. =]

your gingerbread and chocolate tree looks beautiful AND yummy! and thanks for the figgy swirl recipe!! i'm definitely trying these!

Gee, I'm offline for a week and so much to catch up on!! All of your baking sounds (and looks) so fabulous! I feel very bad now that I've done no Christmas baking at all - oh well, next year, when I'm not busy unpacking after moving!

Also love all the Christmas crafting - the wall hanging and coasters are great, the scrim thingy is very clever too. It's no wonder you've needed a nap here and there, you've been so busy!!

How can you get so much done? I'm still knitting Mums mohair throw (now blanket size!)
and I have 1 bird,2 face washers,1 Xmas bauble(1\2 done),1 scooter bag to go. Plus the Christmas Eve Swedish biscuits! I think you must have secret super powers! we used to find that a beach trip with swimming and rolling in sand would get most loose hair out.Have a Merry Christmas!!!

The stary goodness looks yummy. Simple and effective really if you ask me.

Hope you and your little furball lovelies have a wonderful (and lets hope not so hot) Christmas and a safe and cool newyear :)

Love the leaning tower.
Merry christmas to you and Harki and Peri! Wishing you a New Year full of all sorts of interesting things and no hoppiness for any of you :-)

Hurrah for festivities!
Wishing you and your fuzzy ones much merriment and delight :)

The leaning tower looks so yummy & the quilt is great. You had been busy with all those baking. All I did was some shortbread, mince pies & truffles. A Happy & Healthy New Year to you, Harki & Peri!

Hope you had a Very Merry Christmas!!! and have a HAPPY NEW YEAR!!!!