Harki almost had 500g of caster sugar this afternoon. I picked up what I thought was a new bag of sugar, but it was open all the way across, it had popped in the shopping bag, and all the sugar poured out onto the floor. Peri came immediately, but I was getting the vacuum cleaner and so she had to run outside. When I came back, there was Harki doing a little hoovering of her own. So focused in her task was she, that she might have had her tongue sucked up the cleaner if I hadn't pushed her away. Peri is afraid of the cleaner's noise and so she came back in and had to growl at everything whilst wagging her tail furiously!! Lots of sugars are now sold in rigid plastic jugs instead of paper or soft plastic packaging. I'm thinking this is a good idea!!

Harki and Peri like The Forbidden Zone, but Peri has worked out how to open the wooden gate. If it's not bolted shut, she bangs it with her nose so it bounces back and then she whips her paw around the gate and pulls it towards her and pulls it around  with her nose. Too clever for her own good. I have to really remember to bolt it. Today we had some supervised play, which consisted mainly of a lot of grass eating!! 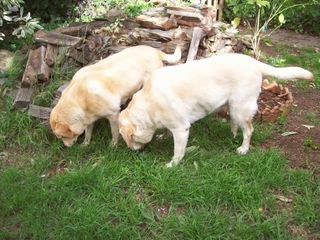 I have washed my Yuletide Skirt material, it's lovely, and all I need is an hour or so to make it. Tomorrow I am binding the crawl rug MrsDrWho made so she can give it away before the baby stops crawling. (That's a little hyperbole there!!) The background is quite lime. 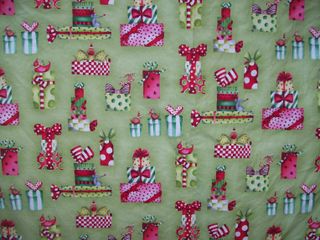 I have finished my secret dishcloth knitting and I have a few things to add before I post it tomorrow. Meanwhile I am doing a little judicious 'quilting' on a large Christmas panel and individually beading each bead of the garland on the panel's tree. Labour of Love for The GardyGardeners.

The children made Shim decorations with me today. We had actual aluminium shim, but in the past I have used the bases of those very heavy foil baking trays. The girls agreed to do some hand modelling for me so I could show what they did on my blog and they very obligingly oohed and ahhed over pictures of The Labradors!!!

The shim is not too thick, but it does have very sharp edges. Be Careful. 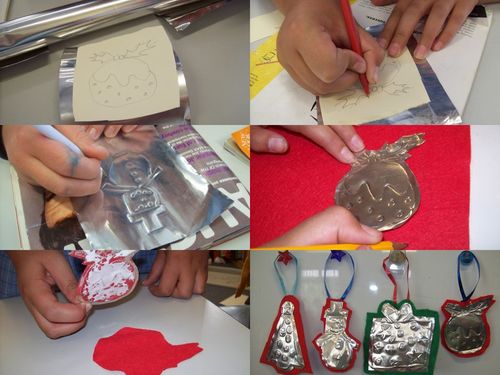 Draw or trace your design onto paper, and then tape it to a piece of shim that is larger than your design. You need at least a 2 cm border on every side. Lean on a magazine and  'draw' over the lines, pressing down, with an old biro or a metal knitting needle, eg. Remove the paper and then redraw over the lines again to really make them stand out.

Cut out your decoration leaving an even border around it. We actually drew a light line to show where to cut about 5mm from the design.  Decide which will he the 'right' side, usually the sticky outy side, and place this face down on some felt and draw a border on the felt, about 1cm all the way around. Cut it out and turn it over so any pencil lines are on the back. Put PVA or craft glue on the back of the decoration and carefully glue it in place.

Add a ribbon hanger and you are done. We learned that adding lots of detail really makes the decoration eye catching. You could stick them onto coloured card as well. I'm also thinking a garland of little stars would be lovely.

Tomorrow there will be some cooking and I will continue being amazed at myself actually blogging every day. I am becoming more organised though I don't think I could ever keep this up all the time. Harki's off to the Vet for Injection #3 and MrsDrWho suggested Peri could come as well, so she doesn't have to be incarcerated (or should that be inhouserated because she is locked in the house, not the car) and Harki could have her sister with her and not be so worried in the Waiting Room. That's a very good idea!!!

oh wow Cindy you are a legend blogging everyday! I couldn't keep up during Blogtoberfest. I LOVE LOVE LOVE that fabric, it's GORGEOUS!!! and very cute decorations too what a great idea

Both Zosia & Jimmy Ray are scared of the vacuum, too, but I'm not sure what would win out. .. their fear or their scavenging of anything dropped on the floor!

What a wonderful crafty 2paw you are! I love the daily blogs and the crafty things - you are now in 2 papers - mine and the paper for burnie!

love that fabric!! it's utterly cute!! and Harki licked so much sugar??? he must have lots of energy after that!!!!

So - can we say we knew you before you were famous? Please send clipping of your first featured recipe via Cadet Reporter Tink!

Gosh you are keeping very busy indeed! All the crafty stuff and cooking!
It was nice of the BSODL lady to keep that material for you! When I see a nice labrador pic/item, I think of you and want to buy it and send it off!