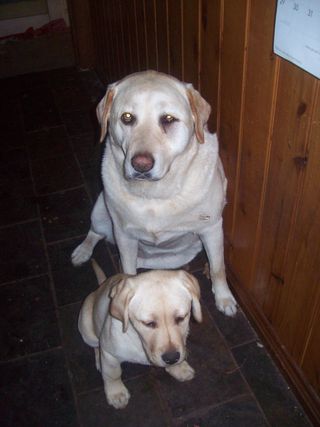 Poor Harki has had an abscess in her face and the swelling is still there today. On Friday Dr Tim thought she had been bitten by a wasp when her left cheek swelled up. She had an antihistamine injection but by Saturday her whole face....well to put it impolitely, she was a Half Boof head and very sick. She couldn't open her mouth without giving a yelp and she was hot and drooly and didn't want to eat, and her left eye was squooshed shut too. Dr Tim gave her a giant antibiotic injection and elephant size antibiotic tablets. Finally on Monday afternoon the abscess seems to have burst and she felt immediately better. It was all very worrying.

Gilly, who worms her way Lindsay Lohan-style into every picture, went with Harki to see Dr Tim on Tuesday. He found a small wound from a stick or maybe a bone inside Harki's mouth which must have been the cause of her infection. Gilly was a star and had so many pats in the waiting room and even went to visit in the back of the surgery. She had a big ruffle up and cuddle from Dr Tim. She showed The Vets how she could sit, and have her ears, eyes and teeth checked. She had two injections and a tablet and was so good. Dr Tim is eyeing her off as a future blood donor. I said Peri was too enthusiastic to be one, but he laughed and pronounced her silly!! Peri is so good now that I think I will have to change her name from Peri Naughty, to Peri Responsible!!! 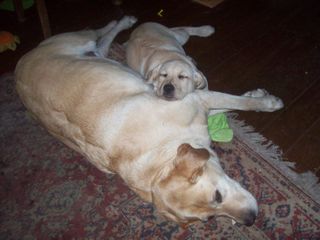 Peri is Gilly's favourite Nap Buddy and they nap hard and fast. Gilly has put on 2kg in a fortnight to have a mass of 10.4kg. I was horrified until Dr Tim said that 1kg a week was to be expected and she was in excellent shape. Now she is allowed to go for a little walk every day. Watch out Big Wide World.

So there has been precious little knitting since I posted last week, I have been too worried about Harki to concentrate on knitting a pattern I am making up as I go. I went to MrsDrWho's class for 90 minutes and the children all started their Easter Bunny Head decoration. I'll post some pictures next week. I have been snatching a few minutes to make my Calico Easter Eggs. I am a bit excited that I could make a 'Page' and then have the pattern pop up. I have no idea how to make a PDF (which I always want to call a PFD, but that's a Personal Flotation Device. PDF?? Personal Document beFuddlement???) Sharon was all cool and computer nerdily talking about scanning and transforming a pattern into a PDF. I, on the other had, am totally befuddled.

I bought a new $40 Battery Recharger so Gilly gets $10 change for her pocket money. This new one can recharge the batteries in 15 minutes. A boon. I have two new Doctor Who books that are part of a ten book series. There are three more Tenth Doctor Books waiting for me at the Bookshop too.  I am taking advantage of the sunny break in the rainy day weather we are having to hang out the towels to dry, and it's almost time to start thinking about what to have for tea. Tomorrow Gilly can go for her very first  walk and I hope to write the five reports on books I promised to assess. No rest for the wicked.

Awwwww....Peri & Gilly look so sweet together. When I'm not around Daisy will deign to sleep parrallel (NOT together!! LOL) with Moonshine, but only when she thinks I can't see her ;)...otherwise she's her usual 'protecting me from the cat' self.

Oh no!! I forgot to wish Harki a speady recovery! Poor thing :(

Hope she is feeling much much better real soon!!

Don't they look lovely -extra pats for poor Harki - having just been to the dentist I know how not fun abcesses are!

Package for you in the next day or so!

i simply couldn't get past the idea of young gilly as Lindsay Lohan. That's gold!

Harki surely must think "Why me all the time?" I'm glad she's better now. Gilly and Peri are adorable, what a pair! :o)

Poor Harki! It must had been terrible for her & you. Good to know that she is better now. I love your Calico easter eggs - they are so cute.

Glad to hear Harki is a lot better now!!! Hugs!! If you're writing the pattern from either Microsoft Word or Microsoft Powerpoint software, you can always pdf the document by using a software such as PrimoPDF which is a free software :)

Oh poor Harki, I am glad she is feeling better now. The napping picture is very cute. I wish I was at home napping with my dogs right now!

Poor Harki - what a yukky thing to happen. And just look at how big Gilly has gotten!

Very cute Easter eggs, there - and no calories!

oh poor sweet Harki!!! hope she is all better very soon, Gilly is a sweetie even if she is a poser!!!! I sure wish I could put on a kilo a week and it actually be ok!!!!! What's with this humid weather?? It really gives me the s*%ts, you think Autumn is coming and this happens!!

You know that they look all sweet and innocent snoozing away, until they wake up!