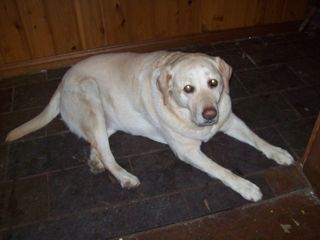 We are all very happy at our house because Harki is feeling well, well as well as can be expected, and her horrid abscess thingy is all gone. She is her joyful self again and has been for walks and she can carry two toys in her mouth at once. Peri is busy rounding up Gilly, who is growing like Topsy. Gilly has been for her very first walk, actually she's been for two now. She might be The World's Best Wee-er Inside While Her Mum Is On The Phone, but she is also The World's Best Walker On A Lead As A Puppy. She trots along like she was born to it, and wags her tail and greets everyone. Dr Tim said we could start going for walks as long as we went on paths not frequented by myriad other dogs. When we leave, Peri hurls herself at the gate and cries piteously as Gilly walks away and she waits faithfully by the gate until we come back. This week Gilly has also learned 'Ready Steady Go!!!!!'  which is what we say when we throw a toy. She runs as soon as I start saying it and then runs back to me, which I think is just a happy coincidence, but it is almost 'Come'. 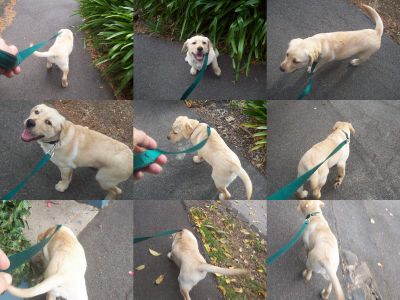 This week, when Bells came back from a long working day, there appeared on the tea table a wondrous meal whipped up by Sean. I usually buy the Donna Hay magazine but I had missed it this week so I immediately rushed out to buy it, and the ingredients to make this: Thyme Pork Chop with Parsnip and Potato Mash and Green Beans. The only horror would be missing out on this. 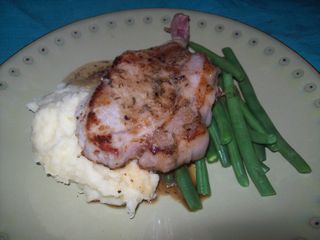 Wow!! It was absolutely delicious and I have enough to make it three more times, once for MrsDrWho I think. It must be Autumn because the Parsnip and Potato mash was perfect, almost as perfect as the mashed potato at MrsDrWho's house last night where I had accidental tea. We have the best potatoes in the world. And a Pork Chop must be the quintessential Autumn meat. Unfortunately there was no fresh Thyme to be had so I had to make do with dried. I could have had enough Sage to sink a ship if I wanted.

Gemma from Loz and Dinny emailed me to say a new shop was opening in town: The Ruby Pear. And because I like to support local shops, I popped along, like a Guerilla Shopper. I was Rachel's(sic) first customer!! I bought a lovely little Babushka Hair tie and a delightful card and badges. I am not sure when it will be open again, but I can recommend a visit. I have also bought some pink bubbly for Mrs Electric's baby shower this afternoon. We are not supposed to take a gift as we will be painting baby singlets (Heaven help the poor baby, what with me having fewer painting skills than a cat) but I've bought Each Peach Pear Plum because it is my very favourite book. We also have to take something for a Time Capsule so I've bought some stamps in presentation packs. I'm going to write a letter to go with them and I think I might put in something I have sewn/knitted as well. Oh and I bought a new craft book. Surprise!!! 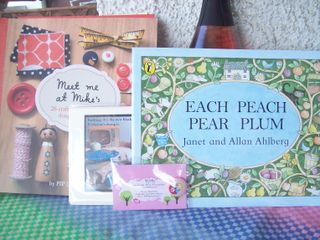 I am making some more Chocolate semi-freddo in about 5 minutes and then I have to write the last part of my book reports and post them, make a Sci-Fi swap zippy bag and knit a little Bunny-ette. Then there should be just enough time for a shower, a cup of tea and some wrapping (or rappin': "I'm goin' to a baby show-er, Presents will be higher than a tow-er, Mrs 'Lectric she is gonna be a moth-er, She will be betta than any oth-er') Or not. And here a picture of Peri who is suffering from Middle Child Syndrome and I don't want her to miss out on any attention. Coo and fawn over her please. Isn't she lovely? Isn't she beautiful?? 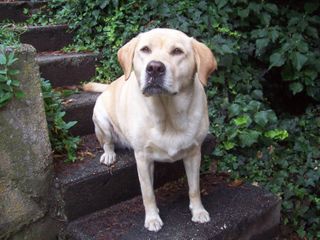 Peri, you are absolutely gooooooorgeous!!!!!

...and Cindy, those chops look delicious!I'm about to try Nigella's pork chops with cider cream sauce and gnocchi(yum) but now I think I'll have to investigate the Donna Hay recipe too. Your rap made me laugh. I hope you have lots of fun at the baby shower.

All of your girls are beautiful and would benefit from my pats!

That pork chop meal looks lovely - but I am trying to restrain mysself from yet more cookbooks - corned beef with mash and cheese sauce here tonight - or pink meat and destructoboy calls it!

Must check out new shop - is Meet me at Mikes a wonderful book?

she is lovely and beautiful! they all are, and so lucky to have a good lead walker as a puppy! my mouth is watering at the mention of chocolate semifreddo....

oh you have been so busy today Cindy! I didn't get along to the new sphop, it sounds wonderful though, great to hear your thoughts about it! The Meet Me at Mikes book did you buy it online or did you get it here in town?

I'm glad Harki is feeling better. I love the second picture in the mosaic. Gilly seems deliriously happy. Poor Peri, I'm a middle child too and I totally understand her. :o) Give all of your pups a hug and a kiss from me! :o)

Peri is indeed beautiful, she's not naughty at all and of course Gilly is so sweet. Puppy training is challenging but so rewarding. Glad to hear Harki is well and the abscess is gone.

i saw someone cooked that dish last week!!! they look so yum you make me want to take a bite!!!

Aww, hello sweetie! Aren't you looking pretty! And the same to Peri, too! ;)

hi! it's great that peri is bonding with gilly =) did you introduce them in a specific such that harki and gilly's bond is less strong?

Your dinner looks so delicious. My husband will love a meal as he loves pork. Now I will have to go out & get eh magazine too.

PS: Gorgeous little puppies. I feel like going out and buying one when each time I see them!

Look at lovely Peri - she is wonderful!! Love all the puppy photos, they are a lovely bunch of 3.