The shoes are no longer the boss, I could (Tony) Danza* the night away in my shoes, well almost. Last year we had The Terrible New Shoes Blister Incident. It was when Peri was still hiding my shoes and I had to wear new shoes on our walk. All the time as I was putting them on and walking I could hear my behind thinks telling me what a bad idea it was. My in front thinks did not listen and I had terrible blisters on the back of my heels that took weeks to heal. This morning it was hailing and raining. My old walking shoes let the water in so I bravely put on my 'new' shoes and wore them. With socks. I still have them on over seven hours later so I think we are over the hump. I was trying to take a picture of my new walking shoes. Here's why it took a while!!! 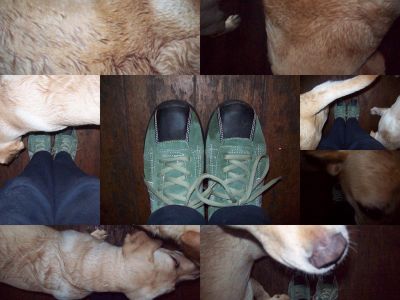 It has been raining for three days and it is so wonderful. I even had to put a long sleeved top on and I am thinking about turning on the heater too, mainly for Harki, but I am sure we will all like it.  We have had so much rain that on our wet walk this morning there were puddles everywhere and the little creek was half full. This was an immediate invitation for Peri to dive in, and so she did!! 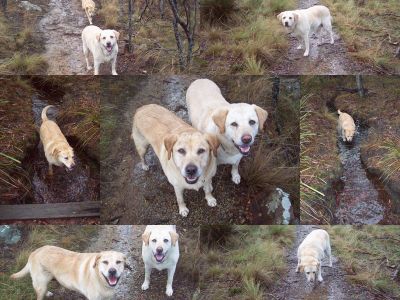 Gill has been learning new things and she can now reliably Ask with her Paw. I tried to take a video of her Asking, but Peri and then Harki joined in and it rapidly degenerated into a Treat Frenzy, but you can see Gilly doing some excellent Asking!!!

MrsDrWho and I caught up, though not brunchily as it was ANZAC Day yesterday, and we did some craft bits and bobs. The kittens helped, but not too much. We finished the tasks quite successfully but, once again, no pictures until the Swap partner receives them. I have knitted more of the February Baby Cardigan (I just can't say 'sweater', it's not in me, and it's not a jumper, it's a cardi) I was going to unravel the FBC, but more experienced Baby Opinion at Torchwool convinced me that babies grow and need jumpers/cardigans even in Spring. I have set the sleeve stitches aside and I am half way through to the hem now. 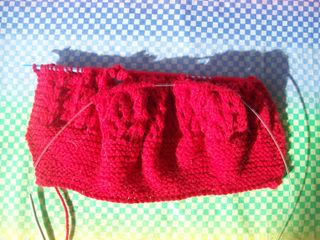 I also snapped up some 'vintage' Wrangler jeans for a swap I am in. I have some gorgeous fabric and thread, and I am going to be doing some thing ever so crafty and pretty: I'm just not sure what it will be yet!!! 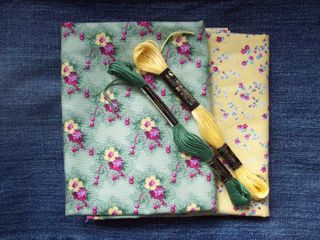 I spent last night and this morning claiming back time from the DVD recorder: I only had 32 hours left and now I have 72!!! I think there are 256 hours available so there is still a lot of partial deleting yet to be accomplished.

Two things I am more than a little addicted to at the moment: the first is Booko, which is a fabulous online site that searches for books and DVDs and compares prices for you, finding the cheapest!! It is in Australian Dollars and considers postage in its pronouncements. The second is Zazz: One day, one thing, one chance, where they sell one thing and only one each day. I have stayed up till midnight to see the change over. It's Australian too, and thanks to Mr Top o'the Mornin' from MrsDrWho's school for passing this on!!!

So, as the rain pours down I'm off to watch some TV with a cup of tea, my knitting and The Labradors. There will be mashed potato in some way shape or for for tea. The Kennebecs are fantastic at the moment, I made lemon and garlic mash the other day. Yum!!! It's just the right weather for mashed potato. And I have Comments to reply too, I will get back to you, I'm just slow!!!

*And now all I can hum is Elton John's Hold Me Closer, Tony Danza!!

An hour later: Help!! For some reason the other day, the internet decided to stop me viewing YouTube videos. I can watch them on YouTube but not on anyone's blog, even my own. I'm not even sure the video I uploaded here is working??  I just get a big blank square space with a little tiny box in the top left hand corner enclosing an even tinier blue square, green circle and blue triangle. I have reinstalled Flash Player, checked my Java and deleted Temporary Internet Files. Quite a few people seeem to be having this problem, has anyone found a solution?? Thank you, yours sincerely, 2paw The Luddite!!!

I love the colour of your new shoes and I would say cardi too - I think it's a Commonwealth thing!! Gilly is so cute (yes, I can see your vid fine!) I love how they all crashed the training exercise and it became a treat frenzy! Is Harki the eldest, she was a bit more sedate, but she still demanded treats didn't she? :-) I've permanently got 'Tiny Dancer' on my mind too! And now I'm humming it and it's only 8.30 am!

I can see the video! Love the labradors all together, they are so enthusiastic.

Your green walking shoes are great, very glad they are now comfortable.

And thank you for those links, the book one especially will be very handy.

Aww...so good to see all the girls...well all but you. I'll be standing faithfully by for your starring role :D

Hasn't the rain been wonderful (although the cold coming in a rush like that was a bit sudden!) Thank you so much for those links - booko seems fabulous!

I am knitting madley on a red jumper and Sian's red cardi and am glad Samuel has a fish hat - I think we all need fish hats!

i can see the video too. Not sure what's happening for you!

Every time I've typed Feb Baby Sweater, I've paused, thought of saying cardigan or jacket, but kept on with sweater, unsure of whether it's good or bad....

Nice shoes & good that you can wear them comfortably now. My mum has a tradition that we "bite" our new shoes before putting them on so that the shoes will not "bite" us. Works all the time!

Can't help with The You Tube, I'm afraid, I don't use it all that often. Try a different browser, maybe?

Natty shoes, by the way, and fingers are crossed that no blisters find their way to your feet!

I love your video. Made me laugh. My youngest(pepper) is always the first to sit if he thinks food is on offer. He will do anything for a treat.