Really I should have called this post: Sandra Bullock and Bill Pullman in While You Were Sleeping, because while we were sleeping, Gilly had a Sticky Adventure. It's not actually as bad as it sounds, it's a stick of tree not adhesive substance. Gilly had a pear and a stick twice her size when I came home. I had given her the pear but she had found the big stick all by herself right up past the garage. We went for a nap and were woken by a lot of banging on the back door. There was Gilly with the stick trying to manoeuvre it through the dog door. To give her her due she did work out how to get it through sideways and I thought that was that and went back to the nap. That was not that. She assembled her accessories: several dog leads, a biscuit box she had spirited away, some toys, a palm frond or two and my green poplin from the box in the hall. She then proceeded to sit upon the poplin and gnaw the stick. If you look carefully you can spy Peri in the corner of two pictures. She was in awe of Gilly's audacity, but not for joining in with her endeavours. The stick has been in and out several times now and is heralded by a galloping sound interspersed with several loud bangs on the back door. Never a dull moment. 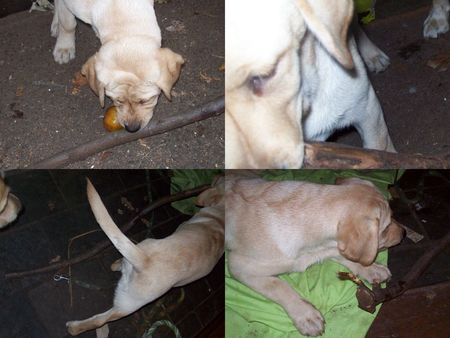 When all is quiet then I know that something wicked, but sweet and cuddly, my way comes.

Harki and Peri had a lovely walk in the crisp early morning. I love Autumn mornings when there is almost a frost on the car and a definite shiver in the air. 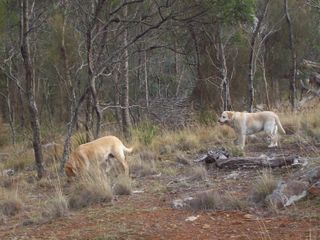 Monsters Vs Aliens was a very good film. The new 3D glasses are like sunglasses and the 3D effect is excellent. The film has lots of in jokes for grown ups. I liked it A Lot. I would have worn my glasses everywhere but I donated them to MrsDrWho to use with her 3D books at school.

The Chicken was enstuffened and the slightly wonky car sewn and likewise finished off. I put Wee Demon Spawn's initials on the number plate!!! It came together really easily though I didn't put any flowers on it. The pattern is in either Softies, or More Softies. 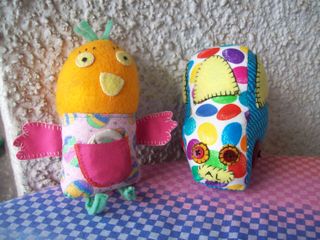 There has been No Knitting. I am in a knitting funk at the moment. I hope I will become more knitting enthused soon. I did start a scarf with my wool made from rock but I left the pattern at MrsDrWho's house and I haven't retrieved it. The most energetic thing I did today, apart from carrying the shopping bags down the stairs, was soaking my feet in some warm water with lavender soap bubbles. Which Gilly was sure was a tasty drink.

I have to do some serious clothes soaking tomorrow. Yesterday I had three tops on in the space of fifteen minutes. Gilly managed to put her grubby paws or face on them all and I had to sponge my skirt too. Good thing the weather is still warmish and sunny so my clothes will dry quickly. 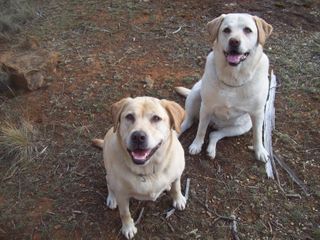 Tomorrow I hope to make a little quilt for the Wee Demon Spawn, from fabric printed with lots of roads etc on which he can drive his cars. This afternoon I did some serious Comment Replying: a weight off my mind!!!

Clever Gilly for getting the stick through the door! Not so clever Gilly for putting grubby marks on your clothes! Guess you have to take the good with the bad!

I think you need to start a new knitting project! Hopefully that will get you out of your knitting funk!

Gilly is pretty smart hey!!! She knows how to make herself comfy!!! Hehehehe ^_^

Knitting - you need some green rose socks (black rose socks from knitty.com) mine were so fast and gave me back all sorts of knitting mojo!

I saw a lovely quote somewhere:

It is one of life's unchanging laws,

The friendliest dogs have the
muddiest paws.

Have always meant to make a crossstitch sampler with it. First of all need a 'round tuit'.

Messy little puppies & their antics are just sooo sweet aren't they! Gilly sounds like a very 'gifted' puppy.....fancy figuring out the stick & the dog door at her age :P
My daughter Abbey came up to visit tonight with her new puppy...an Australian Bulldog I think....Daisy was all set for playtime of hide & seek, but poor little/big puppy just hid behind my legs. he is a very placid puppy & not up to too many antics, but I sure can remember the funny & naughty things Daisy did when she was a puppy.
Enjoy these moments Cindy & I hope you get your knitting mojo back soon!! :)

Gilly sounds like an active & smart puppy. She has definitely brought more excitement into your life! Hope you knitting mojo returns soon.

i agree, best way out of knitting funk is to knit. and i saw bells' blackish-green-roses on the weekend and they are lovely. what tink says!

Thank you very much - I'm here all week, don't forget to tip your waitresses!