I can't contain myself, I have to be slightly cross about a few things:

OK, I needed to get that off my chest. And I shouldn't be feeling cross because last week we had the most excellent seminar about surviving illness. It was lead by a wonderful psychologist and she really made us all think and I came out feeling topped up with lots of positives and lunch!! My new drugs, well old drugs started afresh, are making me feel a little boogelly in the stomach, weirdly tired and I have mouth ulcers. I can't resist touching them with my tongue just to check if they are still there and ouchy. They are. (Yes, I am the same person who put her hand under the ironing board to see if the steam from the iron went through, and this wasn't when I was small! It does by the way)

It is difficult to photograph red, but I have done it nevertheless. The FBC is finished but I am not too happy. The sleeves look a bit skew-wiff. I am not sure why, well I think I know: I couldn't bear the pattern not to be symmetrical so I cast on 9 stitches at one side of the sleeve and 5 at the other. In such a small item it made a big difference. I shall be unravelling the sleeves and re-knitting them: asymmetrically.

I've managed to snap a few pictures of all The Labradors together. Gilly is getting so big. She's a doglet now, no longer cute and round but sort of all arms, legs and nose. We are all working on 'No, don't bite' at the moment. She doesn't hurt, but she's Nippy Norah. Harki was never nippy but Peri was like a shark or a snapping crocodile and she'd give you tiny nips with her very front teeth. 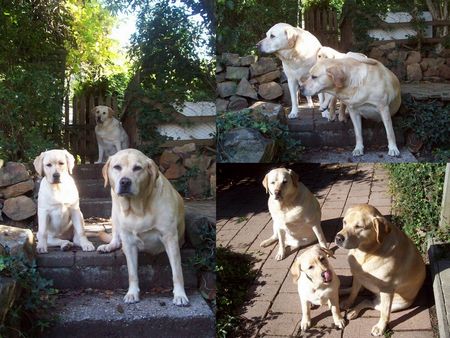 In this collage you can see Gilly. Today when I went outside I found she had knocked/pushed/dug underneath like a Sapper so that two rocks had fallen down from the edge. She is very determined. In the middle picture on the first row she is having a bit of a bark. I stand at the ready to catch her in case she leaps off, but she hasn't yet. Tomorrow is taken up with medical stuff again but on Thursday I am meeting someone I only know internetally, in Real Life!!!! How lucky am I??? Then in the afternoon I am going to see the new Star Trek film with MrsDrWho and on Friday my sister is visiting. She and her husband are Agfest-ing and they are coming North.

I have been doing some other craft that I couldn't post about, but my Sci-Fi Swap partner has received her parcel so I can. She desired some bags, so first is The Dalek Pouch. I used some old denim and I embroidered a Dalek on the front. I used the pattern from the Meet Me At Mike's book. 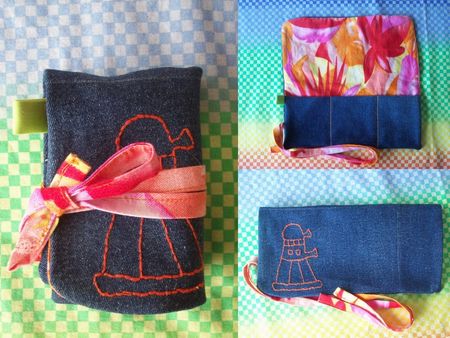 And then The SciFi Drawstring Bag. I laminated some appropriate pictures and enclosed them in some fabric and made six loops. It buttons on, and off, for washing purposes!! I am most pleased with it. My partner likes orange and turquoise/teal colours. 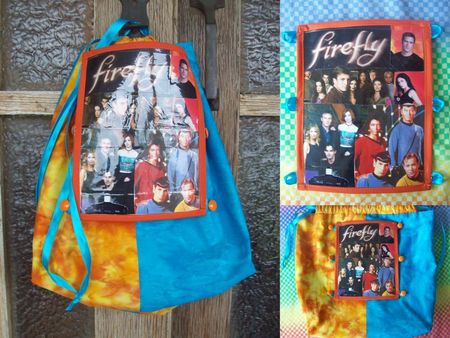 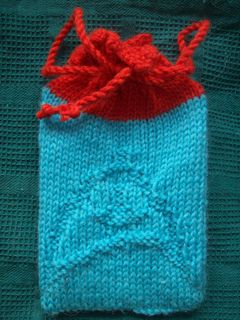 Well I am feast or famine lately with my blogging. I've been quite unable to motivate myself to do very much. I think Gilly wears me out and I have two walks to do with The Labradors as well. They are fast asleep, so I shall wake them up and we'll  go up to The Forbidden Zone before we all go to bed to sleep, perchance to dream!!

Boo hiss to Purina. That's our dog food of choice as well - it supplements the rice,veg and meat we cook up for the little darlings and make sure they get all their nutrients. I was pissed off when the big bags went from 10k to 8k with no drop in price. Now I'm smokin' mad.

i second that boo to Purina! that sort of sneaky action is like saying their consumers are too silly to notice the difference. As you say, whatever happened to honesty?

and does one ever really "win" with insurance companies?

the seminar sounds like it was just the ticket, though, and those Dalek pouches are rather cute!

The anonymous internetter is asleep at the moment upstairs -but is looking forward to really meeting you!

I know who you're meeting!!!

FBC looks cute. I thought my sleeves were a bit off too but they blocked out ok. Maybe they'll be ok if you block them?

Glad to seminar was good. Sometimes those sorts of things are just the ticket.

that anonymous internetter is going to get lost in someones turret i can just feel it! hope you have fun together :) i cant believe how big gilly has gotten, that happened kind of fast. i must confess to not doing purina because they are owned by nestle and nestle are evil, as evidenced by that little trick. and im with bells on the blocking...

That is indeed very sneaky of Purina :( Cost of basic stuff are slowly rising :( Not happy

Btw, love that photo of the three of them together!!

I'm sorry about Mrs Fancy Pants. Insurance companies really seem to be in the business of not giving out any money.
The labradors look beautiful. Gilly really is growing up!
I'm so glad you've been inspired by the workshop...and I love all your swap goodies ~ further evidence that you are a fabulous swap partner! =D

There's been far too much rubbing of the salt into the wound this week - not nice. Hope you will be able to replace Mrs FancyPants soon though (hmm, might have call the new one Lady FancyPants?)

And am very excited about tomorrow...

Sorry about the sewing machine (and the annoying insurance deal) - I shall be wearing black in remembrance.

I hope you have a nice time with your internet friend and your sister. I promise that if I win a heap of money I'll come and visit!

That pup is growing like a weed! Thanks so much for sharing :D

FBC looks good & I don't notice anything wrong with the sleeves. It's really bad of Purina to do that & I believe it's the trend now. I love Continental side dishes & now they are packaged in a box with less content & a higher price. Why am I paying for the box which I can't eat. Good on you to email them.

I agree with all your complaints Cindy. That smaller pack bigger price has been happening for a few years now with a lot of products!! Some are tiny amounts like a few years ago it was just 20gms less in a baked bean tin but I think it stinks and should be illegal! I LOVE your SciFi swap it's all awesome and I hope you enjoyed Star Trek I have heard good reviews on Radio national. Lastly, that seminar sounds like a wonderful and helpful thing to go to, so glad you came away feeling good

A valid bunch of complaints there! We're trying to figure out how to feed Petal once she comes home, and are tending towards the home-cooked meals to avoid the evil big pet food companies (but one chihuahua eats MUCH LESS than 3 labs!).

I'm glad you were able to go to a special seminar about surviving chronic illness. I think Dotter needs one of those, she's very down at the moment with her diabetes.

Dang about the sewing machine! Double dang on the dog food (and Cascade changing the size of their bottles - Nathan likes Cascade Premium Light as a summer beer, not that you can get it here).
Gilly is getting big!
Hope the meds are settling down some. I have a little string of ulcers where I scratched the inside of my lip. Like you, my tongue keeps prodding them - do you hurt still? Yeep! 10 seconds later - do you hurt still? YEEP!

hi Cindy just checking in to see if you are ok???? hope so, hugs

Hi Cindy. See we all get worried if your'e not blogging! Hope everything/everyone is ok
Honeybicton

I always love your puppy photos, and you do such a nice job of putting them together!

so i'm woefully behind in my blog reading. . . currenly 800 unread posts :) i can't believe how big your little puppy has gotten!!!