The Secret Life of Walter Mitties

I like my Walter Mitties. They were short and sweet to make: an evening each. These are my Dog Walking mittens and they are just plain BSODL(tm) 8ply. They are not pretty, the top shaping is just 2 rows of K2togs and then it is all gathered in. They are utilitarian rather than fashionable.They are different sizes. The left is 6 rows longer than the right. I think if I make the shorter one longer I can get away without a button: I did wonder how you would undo the buttons if both your hands were still encased?? I Test Wore them today even though it wasn't cold enough and they went gangbusters!! The top version is longer and seems to stay together quite well. The bottom one? Not so much.... 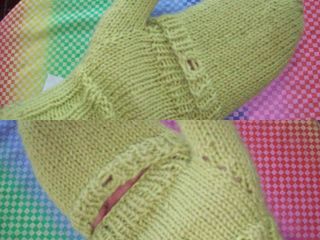 I haven't been so gangbusters myself.  One of the drugs I've started taking again gave me boogelly side effects. Last time I didn't have any. This time I had swollen gums, mouth ulcers, nausea, painful and swollen joints, muscles and soft tissue and to top it all off, fatigue!! How ironic is that?? My other numbers were excellent but I still needed to sleep for seventeen hours on several occasions. Luckily it's not a vital drug and so I had a little rest from it and I am taking it again in the evening and only one or two tablets instead of four. My specialist is very nice and he lets me decide for myself. I was going so well, and then I got all apathetic and couldn't enthuse myself enough to blog. I HAVE answered all my comments. (I hope) Thank you for your lovely kind words!!

Here are The Labradors, all settled in for the evening and having a lovely sleep. It is a couch full of Love. I am very lucky that MrsDrWho's family entrusted some new green comfy armchairs to me and so I have somewhere to sit when The Labradors take over. Auntie and Uncle Dutch and Uncle Electric brought the chairs and Uncle Electric took Mrs FancyPants the sewing machine away with him to play with and see if it might work. I hold out no hope: not that I don't have the utmost confidence in him, but I fear the Power of A Cup of Tea might defeat even his skills.

Peri, Gilly and Harki look after me very well, even if sometimes the lounge room looks like The Godfather III. Well, the horses were only $1-50 each!! Consequently not much has been happening. MrsDrWho and I saw Star Trek. Twice. The first time at 4pm on the first day with only four other people in the cinema. Fantastic. The second time on the next Monday night where the whole row behind us not only talked all the time, but had every crinkly and crushy paper encased food known to man. And they crinkled and crushed their way through the entire film. We were glad we had seen it in peace the first time. I loved it, it was fabulous and wonderful and amusing and everything a film should be. In fact I would go so far as to say the best Trek film. I am so brave, but hey, you have to move with the times: I give you Doctor Who as evidence.

I met my Imaginary Internet Friend but I am not going to write about it until she does, it only seems fair.

Finally, MrsDrWho and I reverted to about age sixteen and there were more elbows than in a whole season of Friends and more squeals than a piglet party when we watched Captain Tightpants in Castle. Oh my, it was good, kind of Moonlighting meets Remington Steele meets, oh according to the information, meets The Rockford Files. We even refrained from watching it on Sunday night and I went to MrsDrWho's for tea on Monday and we watched it. Twice.

So, I am laying paving stones on the road to Hell and will be back to post again soon!!

I love the picture with all three of them on the couch!

I hope you're feeling better soon! Good thing you have so much Labrador love :)

A little bird tells me that I am being taken to see the Star Trek movie this weekend (for my birthday). I can't wait!

Wahhhh - I wish I was there with your Imaginary Internet Friend when they came to play. But I believe my hug was transferred successfully.

awwww, look at the labradors on the lounge - so comfortables! Lucky you have some more chairs and so weren't relegated to the floor!

I think your Walter Mitties are great (although I see your point about the button - hmmm, maybe velcro would be better?)

I watched Castle too - VERY Moonlighting, I thought. I giggle now at the thought of you giggling with MrsDrWho - now that I can picture it a bit more clearly!!!

Do you the the collective might be a love of labradors?

When is castle on? what is castle oin? Why haven't I seen it? have I missed all the good bits? Aaargh (you would also probably like 'Pushing Daisies' very much - we are enjoying it lots! It is silly and funny and quirky)

oh look at those puppies! glad you are getting lots of puppy love, and sorry to hear about the boogelly stuff. i have been a bit put off by all the action shots of the trek movie, but after your review perhaps i will go!

awww...love that pic where all the doggies sleep together!!!!

I hope the change in meds settles down! Sounds like no fun at all.
Heh, an extra chair or two seems like a very good idea!

sorry to hear you haven't been feeling good.

I watched Castle Sunday night! After you told me about it, I finally saw two ads for it and it looked good and it was! I liked it alot, I love just about all crime shows but I was in desperate need of something new!

oooh Gilly is getting so big!!

The three asleep together look so comfortable, or "combubble" as Miss Two said of socks made for her. Gilly is growing so much, all legs. Hmm, velcro might be easier to manage than a button, but buttons don't collect lots of bits of fluff and probably dog hair.

Take care of yourself.

There is very little in life that can't be solved by a good dose of Captain Tightpants. I was overjoyed when he showed up on Desperate Housewives!

The mittens are usual especially with the button opening. Why do you need the button? I watched the 1st episode of Castle too & it was great! Anyway, I love crime shows. Take care.

The dogs look just sooo sweet lying 'cheek to jowl' so to speak :D I just hope they all smell nice LOL
We saw Star Trek last week too & thought it was fabulous....however I had the crinkly lady from hell sitting next to me too, except hers was an empty packet. I felt like reaching over & ripping it out of her hands. Nice way to relax huh!!

I'm glad that you've been able to side-step the side-effects, and that the dogs are looking after you - if not the racing stable!
And I'm with you on Castle - I was having such flashbacks to the super-suave Remington Steele that I was quite glad hubby wasn't there to ask why I was fanning myself!!! :> And it's on again tonight!! girly SQUEEEE!!!