Gilly has had the last of her puppy vaccinations and will be free this weekend to terrorise the world at large. Hang on to your hats. And shoes. And knitting. She was lucky enough to see Dr Malcolm and because there were renovations she was allowed out the back in the actual surgery. Whereupon she held an 'At Home' and all the Doctors and Nurses came to visit her and pat her and coo. She has a mass of 19kg now, so she's a bit over half a Labrador. She was pronounced very healthy and a fine puppy!! She eventually got the hang of waiting room etiquette. 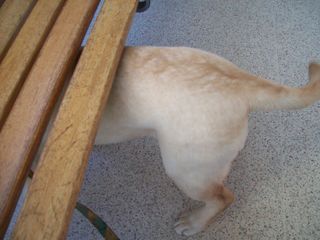 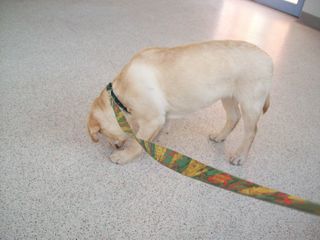 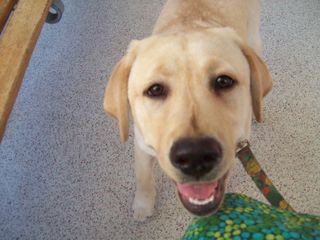 Harki has FlippyFloppy Ear and she went to the Vet on Wednesday. Harki was lucky enough to see Dr Tim. Dr Tim is looking after her and he always gives her a lovely pat and cuddle. Both her ears are boogelly so she has extra strength ear drops. She was treated to chicken nuggets from the Scottish Takeaway. 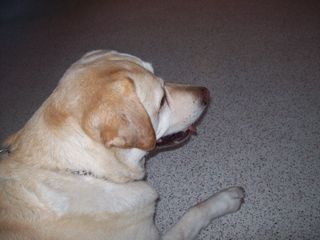 Peri has been well. No trips in the car or extra treats for her. She had to cry piteously at the gate because I decided that as she had one of her sisters with her, she didn't need to be locked inside. Surely she wouldn't howl like a banshee?? She banged on the gate as I left and my next door neighbour said she cried a little, but didn't howl.  It has been raining the last few days so we have some Labrador Cabin Fever brewing. No H1N1 as yet. 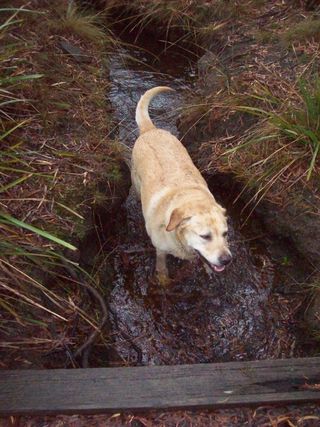 This week I have been socialising and sleeping. I slept so much that one afternoon nap extended into the evening and MrsDrWho had to ring and wake me up, otherwise I would have missed Mrs Reno's wondrous dinner party. Here is Mrs Reno's hot chocolate at lunch today: a work of art we thought. 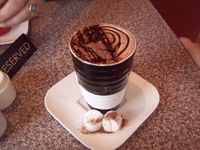 Nothing on at the pictures. We aren't going to see Terminator:Salvation for the same reason we decided not to watch the last two episodes of Blake's 7: too dark and too depressing. In my happy imagination the characters from Blake's 7 never really died, the shots just stunned them and they live on in their Universe. (But Marcus is Dead) On the radio this week they discussed Imaginary Friends. 65% of children have one or more and these children benefit from the friendship and are more creative and happy. I didn't ever have an Imaginary Friend. I was feeling very sad until MrsDrWho and Mrs HouseOf reminded me that when there is a book handy, you have all the Imaginary Friends you need!! I could read when I was three so I have always had a wealth of friends at my fingertips. It made me feel much happier to know that. In the bookcase in the hall I still have some of my extremely well read and loved Little Golden Books!!! 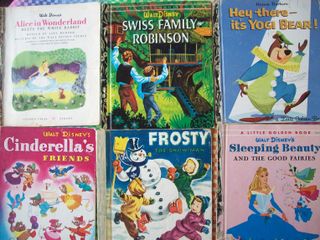 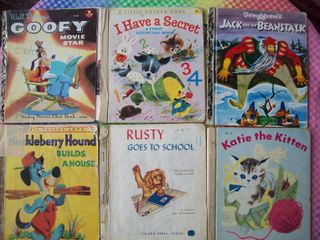 But here is my favourite. Of course. 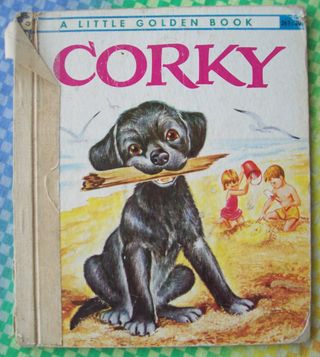 I don't know where all my other childhood books are, I expect they were lost when my mum moved house years ago: she's wont to get rid of things. I am the total opposite.

So, nothing craft-wise to show. I am working on some secret enterprises for MrsDrWho's birthday. The black cardi is stalled due to ennui. I may do some embroidery tomorrow. Stay tuned for more underwhelming news!!!

I remember reading the Egg Book! I too could read at an early age and I was always acting out the stories. I don't remember having an imaginary friend but my brother did. I was older and thought he silly for talking to himself. :)

ooh...19kg?? I think that's about how much Momo weigh too!! Gilly is looking very cute and cuddly :)

I remember all my childhood books were from Ladybird. I used to read a lot when I was little :) Sadly, Mum gave them away after I was grown up :(

I used to have a little golden book omnibus! It was excellent. I wonder where it is now...hope mum still has it!

reports on the health and cuteness of your puppies are never underwhelming! i loved my golden books too...ah the good old days xx

hee, I had a giggle about Gilly holding her "at home" at the vet's!

and that gorgeous LGB collection is a lovely thing to behold - you should go on "The Collectors", they'd love it!

My favourite LGB was called The animals of farmer jones (or something like that). It was a great one to have read to you because you could join in with the animal noises (so I'm told although I don't remember this myself).

I don't think I had any imaginary friends, but I certainly had my head in a book all through my childhood, adolescence and early adulthood - but now motherhood and careerhood are thwarting me a little :>
Happy happy dogs, lucky you with yums!

I love the way Gilly is smiling in her last photograph. I didn't have an imaginary friend either but I did really enjoy Golden Books ~ I think my mother still has all of them. My favourite was Mr Dog. =]

One of my sisters took all of my childhood books for her kids. I stole some back :-) I even brought 7 of them to the US with me! But not little golden books. I think my favourite was the one about the little train that learned to stay on the rails. (Heh. A book about being conservative, Taking The Main Path and Doing The Right Thing. Me. Heh.)
Thanks for the reminder of having friends in books.
Gilly is getting big!

I love your Golden Books and we have some of the same ones but I am a little bit envious of the Mary Poppins one!!! cute photos of Gilly at Dr Malcolm's!!! I know we need the rain but I am over it for a while as the washing is piling up so high!!!

I love those Golden Books & had them too when I was young. I think my mum had thrown all of them away. I also bought these books for my girls & I think they still have them.