Home Archives Profile Subscribe
Harry Potter and the Half Blood Prints
She said,"You're movin' with your auntie and uncle in Bel Hair."

Ar-armstrong, I Am Invincible, I am Aldrin.....

It was forty years ago today that I sat in a classroom at school, watching TV, and saw the astronauts walking on the moon. The TV was B&W and classes were big and TVs rare so we were all, possibly the whole school, squashed into the Grade 3/4 room. Sister Margaret Mary was our teacher: she of the whistle blowing and whistling cane. It is still hard to believe that the astronauts went to the Moon and back, though I am not an Unbeliever!! Australia was heavily involved with the moon missions and we heard and saw the pictures milliseconds before the US. The scientist on the radio this afternoon confirmed the fact that the computers used then had fewer thingamajigs of intelligence and power than a modern calculator or simple mobile phone. I can see why some find it hard to believe the moon missions occurred. Being Collins must have been quite hard too, going all that way and not being allowed out of the rocket.

The Pop Tartigan, she of the TdF KAL, is going well. The sleeves and the back are all the right length and I can start the fronts. I had a few rest days but I did remember to make my cloth for the Cloth and Soap Swap. 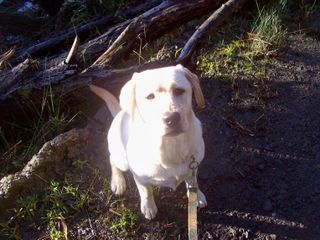 Lorelai Gilmore and I walk beside the river. This sounds a riparian delight, very Wind in the Willows, but it isn't.

The view today was crystal clear and the sky blue, but you don't want to even dip a toe in the water and the smell, well, it doesn't bear thinking about. The river is a constant source of debate, it is full of silt and pollution and everyone in power wants to do studies and have meetings, but no-one actually wants to fix it. 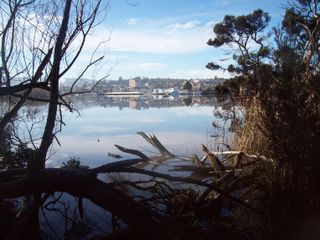 Harki and Peri love waiting for the postman and when the new Delicious magazine arrived we all went out onto the verandah.Gilly goes because the Big Dogs do. Every Labrador had their nose metaphorically pressed to the glass of the verandah, wildly hoping the postman had a parcel, and they would get a pat!!! They were sadly disappointed and had to make do with pats from me. 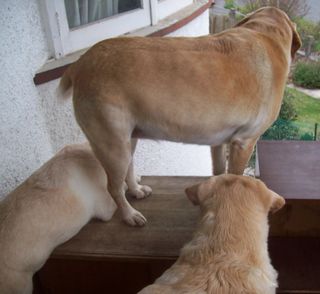 Someone else has a new pup. A lovely black Labrador who was very much wanted and will be very much loved. Rumour has it he is Gilly's boyfriend, but this is Not True!! She is far to young to have a boyfriend!!

A picture of the new Doctor Who and his companion, Amy Pond (What were they thinking??) can be sneakily previewed here!!!

I am having clicky link issues: they appear to me to be neither bold, nor Spring Frost green, so I hope they work.

The sunny morning deteriorated into a dull and rainy afternoon and I am having porridge for afternoon tea and then a nap I think.

Tis Elisha, wanted to ask you about Brown Owls but my computer is stupid and wont let me email you so i have tried this instead. Now that i am all stuck and home and everything makes me so sleepy i have been doing a bit of sewing cause i can do it sitting down. Suzzy and Liv gave me the Meet me at Mikes book for my b'day and it had info about Brown Owls. Do you go to the Laun one? Is there room for another sleepy sewing friend?
Thanks Elisha

The links are both boldy and green for me, so you must be doing something right! I've not heard of Lamingtons before - they look yummy! I may have to give them a try.

I'm sorry to hear about your river not getting the attention it deserves. Our Long Island Sound is very much like that...better than it was but too many studies and not enough work!

I received an email from animal rescue friends. There are two labs in NY (one black, one white) in need of a home together. I know you have many blog friends who also have labs (or may be looking for them), so if anyone is interested, please let me know. I would hate for them to be separated.

Everyone wants a report, because they think we think they are doing something - but we know they are doing nothing except yet another report. They are also spending lots of money hoping to not have to make decision - ptui! politicians (of all stripes and parties)
But the new Doctor Who is not as nice as David Tennant. sadness.....

I watched the moon landing too. We, of course, were in the West so Mum had to get us up early to see it. The astronauts were sooooo brave!

I think that your photograph of the river is beautiful ~ I really hope people come together and bring it back to good health.

I've just finished my cloth for the swap too...and I'm going to mail it out after I've finished posting this!
x

I did not know today was National Lamington Day. What a shame I don't have any day old sponge, or else I'd be there! But I do have the fixings for Anzac Cake, and am about to make one as a special treat for my husband!

I can't remember watching the landing on the moon, must be old age memory. Porridge sounds good on a rainy & cold day & sometimes I have it for both breakfast & lunch.

National Lamington Day is news to me too - how un-Australian of me! My husband thinks your gold dalek is "awesome" by the way.