Harry Potter and the Half Blood Prints

MrsDrWho and I joined the exceedingly long queue at the pictures to see HP #6 at 5-30pm on Thursday. I bought the tickets the day before, so we didn't have to be in the even more exceedingly long queue to buy tickets. On My Scale of Looking At Your Watch-edness, the film scores a big fat Zero, the best score!!! The mere inkling of the idea of the thought of looking at my watch, a true indication of my attention wandering, didn't happen at all. Now if you have never seen a HP film, this is a poor one to start with, I recommend you start with #1. But for aficionados, this was a fantastic film. Sure they tinkered with the story, added some things and took others away, but it didn't matter. I really enjoyed it and I shall dub it The Film Of Looks. Everyone was giving everyone else meaningful looks and glances. Looks and glances with many and varied meanings. I am looking forward to HP 7 and 7A which are meant to be screened in November 2010 and July 2011 respectively.

There has been some unnecessary excitement on the health front for one Labrador who shall remain nameless (her name rhymes with silly) but she is fine. There has also been some unwelcome excitement with regard to my credit/debit card which has been somehow and somewhere, according to my credit union, 'compromised'. Great. We have unanimously decided to cancel the card and now I have to wait till the new one arrives until I can have any money. That's the trouble with having all your money in the same place and only accessible by electronic means. Luckily there is plenty of food for The Labradors. Today the after effects of the two events caught up with me and I had a sore throat and needed a 4 1/2 hour nap this afternoon. Luckily even the newest Labrador is trained to nap. 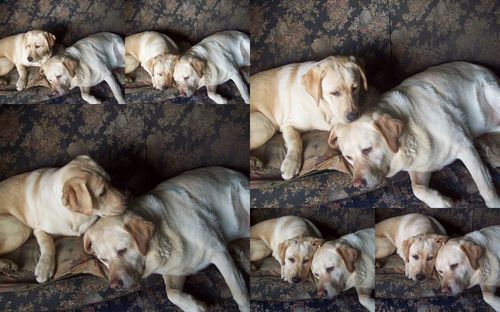 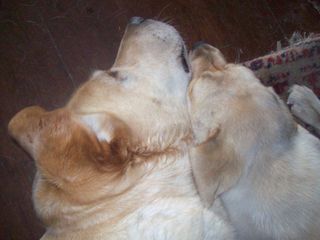 Speaking of sleeping, Lorelai Gilmore would not come to bed last night. She is deathly afraid of my Doctor Who Dalek clock. When you press the Dalek it speaks and lights flash. I was making the clock talk to Harki and Peri, as you do, and Lorelai Gilmore took off like a shot and put her ears down and slept in the lounge chair. She would not be coaxed back into the bedroom until I hid the clock and shut all the doors. It's not just the clock, if I talk to her in a Dalek voice she runs away too. Poor baby!!!

I shall not bore you with pictures of the TdF Pop Tartigan sleeves. They are longer but not quite long enough. I found another ball of wool which leads me to believe I shall have enough to do the fronts. Tomorrow is not a Going For A Walk Day so I shall be ensconced in front of the TV claiming back some DVR hours and knitting furiously.

In the olden days we took our camera film to the chemist and they made prints. My new printer lets me scan and I have scanned a print of Vundy the German Shepherd. It is the first picture I have of her and I am posting it today, because today is her birthday, she would be 20!!! Such a tiny baby, she was a lovely girl and both Harki and Peri grew up with her. Vundy was a wonderful role model and the cleverest of German Shepherds: gentle and noble and faithful. 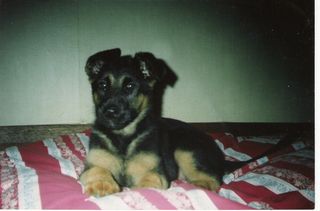 Last week I made the ANZAC Cake, from BH&G. There are pros and cons. Opinions differ wildly!!! MrsDrWho and I both thought it was wrong, wrong in the sense of we were expecting the texture and actuality of an ANZAC biscuit, and it was just 'wrong'. People at morning tea, however, thought it was fabulous and asked for the recipe.  It is meant to be soused with a rum and sugar syrup and then have fresh coconut shredded on top, but I think that's taking it a bit far. It can be simply served with cream.

Preheat oven to 170*C and grease and line a 23 cm springform pan. I greased the baking paper and sprinkled in some caster sugar to coat the sides and base of the cake.
Melt the butter and golden syrup. Cool slightly. Whisk in the eggs. Combine the dry ingredients in a bowl, make a well in the centre and add the wet ingredients. Mix well and then spoon into the tin. Bake for 25 minutes. Mine took longer, 35-40 minutes so do check. It seemed to go from wobbly to a 'set' cake quite quickly. Cool in the tin. Slice and serve with cream.

If you want to make the syrup, combine 1/4 cup rum and 1/4 cup caster sugar and boil for 5 minutes. Pour over the cooled cake on a rack and the serve with shredded fresh coconut.

I can't wait to see HP6! I have tickets for Tuesday with M, but I might get a sneak preview with summer school students on Sunday! Poor Gilly, still she is sensible to be afraid of Daleks! Vundy looks adorable - I remember when Joe was that little! :-)

Oh, what a cute little puppy Vundy was! I don't blame Gilly for running away from the Dalek clock - especially since Russell T Davies decided they could levitate!
My parent's cards/account has be "compromised" twice in the recent past plus my dad left his card in the supermarket, so they've had 3 new cards in as many years! Better to be safe than robbed.

What a lovely puppy picture! I would go with the rum syrup, yep, sounds delicious to me. :o)

Hahhaha, don't blame Gilly from running away from Daleks either!
Cancelling the card is a good idea - we've had three new cards here, also we had over $500 in charges made against a card at home, charges we did not authorise! That meant a new card too...

i am off to see the HP tomorrow. cant wait. and anzac cake did sound wrong till you mentioned the rum syrup! it looks delish.

Oh an anzac cake?! Novel. I'd go the rum, sugar and coconut route just because it sounds decadent!

Have never seen any HP movies - only read one book. I seem to have missed the boat!

Oh I want to see the film, but will probably have to wait until the DVD is released - sigh! But I love the Dalek clock story - and I might make the ANZAC cake at some point - but it does sound a bit sacrilegious!

We had a faithful loyal, intelligent German Shepherd too, who took good care of my sons when they were small.

Gilly would not like our bottle opener for crown seal type things, eg Coronas. It looks like a Dalek and when the right contact is made between cap and opener, it says in correct tones, "Exterminate! Exterminate." As does large pinball Dr Who machine which my son owns.

Credit card? Ours was compromised, as they call it, several years ago. We have no idea how the number was obtained, but someone ran up $6000 (that's right) on dirty telephone calls before it was noticed that this seemed out of the ordinary for our use. Police etc were involved but we didn't lose any money because of it.

Oh no, ANOTHER yummy recipe to make!

So glad you had a great movie experience, and bugger about the card - hope you're financial again quick smart!!

Lovely doggie piccies all round :)

I am not a HP fan but my 2 girls are. They watched the 1st screening & came back with lots to talk about. Mm..an Anzac cake..that's something new...wonder how it taste?

Anzac Cake? Hmmm, it does seem rather wrong, but also looks rather right...might have to give it a whirl, I think!

I'm looking forward to seeing HP, might wait until school holidays are finished here though before we brave the cinema!

My CC was compromised recently too - what a pain to wait for a replacement and then have to fix all the direct credit thingys we had (not that there were many but it was an annoyance all the same).

Thank you for the picture of Vundy - what a wonderful companion.