At long last, The Pop Tartigan is complete (though I may sew a ribbon inside the neckband to stabilise it a bit) She is named after Rose in Doctor Who, Rose the Pop Tart I think she's called by a certain someone!! Knitted in some Moda Dea Vixen in Licorice Whip and some Cupcake in black. She's knitted in five pieces up to the underarm, where she morphed into a seamless yoke with alternate stripes of Cupcake and Vixen. I used The Handy Book Of Jumpers(Sweaters) by Ann Budd for my stitch counts but the pattern is custom made for the recipient. From the moment of purchasing the wool, to the completion of the cardi, has taken about three years, so MrsDrWho has been Very Patient. The Pop Tartigan is artfully arranged on MrsDrWho's carpet and there were few pictures without a cat. This is one of them.

I thought I wouldn't be able to blog today because when I sat down to start this afternoon my internet had a bit of a conniption, and though it is fine now, I have been to tea at MrsDrWho's house to watch the first episode of Stargate:Universe. It was pretty good and I can't wait to see more. We are also five episodes into Season Two of Primeval.

The Agricultural Show is happening and there were fireworks tonight. I heard them while I was out and realised this was probably Lorelai Gilmore's first firework night. She is fine. She is killing, very noisily, very slowly, a crinkly plastic bag.

I could have given away The Labradors several times over, not that I would, and they would be hard to wrap and post. Some people also asked how The Labradors choose winners. Well, I can't find the post where it has happened before, but I assign everyone a number and then write the numbers in safe pencil on a chicken Schmacko, once for each draw. I cut up the tiny pieces and then throw them to one Labrador at a time and with lightning fast reflexes I grab the last piece before they eat it and Voila: The Winner is the one who hasn't been eaten!!!

Today The Labradors have been looking at things. 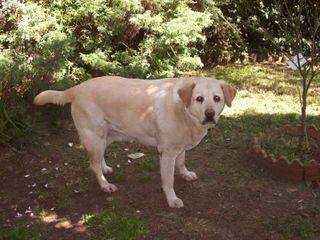 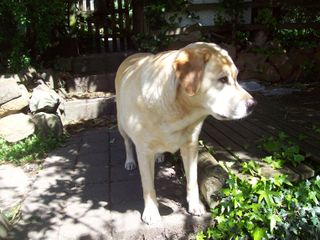 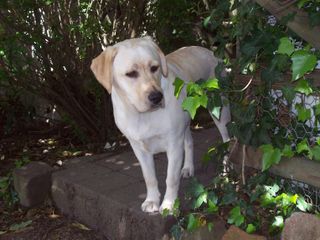 My eyes are very itchy and I am sneezy so I think I have a little bit of a cold. Off to bed now, minutes before the blogging deadline. Tomorrow I will give MrsDrWho her Square Hat on a Round Head hat and we are going to look at ovens. I live a wild and dangerous life!!!

Hooray for the Pop Tartigan! Nice work! I think that must be a useful book!

Hope you don't get a full blown cold.

A 'wild & dangerous life' indeed.....especially chasing after bits of smacko's while in contest with hungry labs to get there 1st!!! Better you than me!! LOL

MrsDrWho will enjoy her lovely Pop Tartigan all the more for the patience she has endured, I'm sure :D & a Square Hat as well....what a lucky lady!!

I hope a good nights sleep cures your cold...take care.

One would think the simple fact of not being eaten would be prize enough but no, you Madam, raise the bar once again! Life and a zippy pouch! Hurrah!

Back in the bad old days when you could buy fireworks and let them off yourself(much more fun) our black lab sat on a cracker whihc went off underneath him - he looked very embarrassed at the noise his bottom had made - no it did not hurt him a bit - but the pet sheep didn't like them one bit!

I hope Gilly was victorious over the crinkly plastic bag of evil!

I love your method of having the pups choose the winner - perfect! And glad you use a safe pencil, we wouldn't want them to get lead poisoning (do they still make the writey bit out of lead??)

Did you enter any knitting or sewing or baking in the show (is it that kind of show?)

Oh, and hurrah for finished Pop Tartigan! I like the stripey bits very much!

MrsDrWho is very patient but I think she'll forgive you!