Lorelai Is Coming, The Geese Are Getting Fat.

Thank you for all your kind Get Well wishes. I am obviously not quite over whatever it was I had because there was a slight contretemps at The BlackSpot of Doomlight(tm) this afternoon and I had to come home  and have a cup of tea and recover. Good thing I've pretty much done all the shopping that MrsDrWho and I need, because I shall be having a little rest from BSODL(tm)

Lorelai Gilmore is wicked but she is also very good. What a conundrum she is. I took her to the dam and I let her off the lead (well I left the lead attached because she can't run far without treading on it!!) At first she wouldn't leave my side, but then I walked away and I called her to Come:

Now, whenever I whistle for her she runs to me wherever I am with such joy!! When she hears this video play she comes too. What a clever girl she is!!

Hark-Parki-Parker-Posey is still pottering along. She still rules the roost and she still likes to play games with her toys and with me. The other day Harki and Peri went off into the bush and were nowhere to be seen when I got to the gate. I called them and Harki came first with her hop-along run and Peri came second, literally flying round the corner at lightning speed!!! 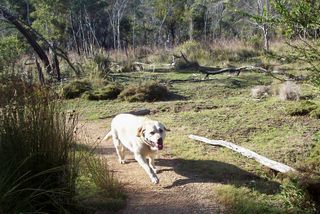 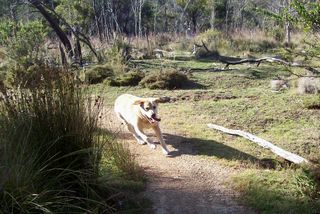 I have been very sporadic in my blog reading, commenting and replying, but I think I am almost up to speed, but without my ears flying up and my tongue hanging out!!

There has been an outing to a fabulous Chinese restaurant where I erred on the side of caution and had steamed dumplings, which believe me was no hardship. I would have ordered them anyway. There was an exchange of gifts involving the Lazy Susan. I think the other diners were very curious about our Lazy Susan use!! 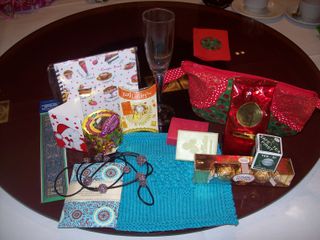 I have had a few Christmas outings, but the one that has taken all our fancies is the Dessert Buffet at the Casino. $14-50 for all you can eat of the delicious desserts and as many cups of tea as you like as well. This is a poor photo, but the tree decoration has an LED light that changes colour!!!So cool!! And there's a decoration, a Rudesheim crystal, a pair of green embroidery scissors and a pincushion. 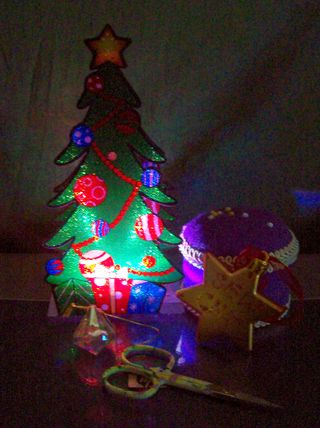 The pin cushion is from Leukaemia Support Group's Christmas and the man giving out the Secret Santa gifts, and his wife, has bought it especially for me so he made sure I received it. It is just what I need!! I made a Christmas Star face cloth for our lovely Nurse. 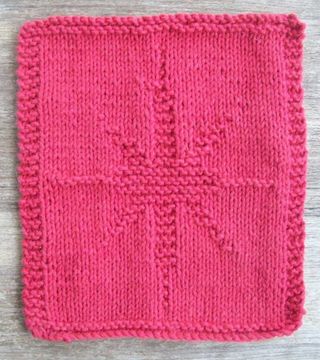 What else?? I made a Christmas Craft apron for MrsDrWho to wear at school with four pockets to keep her implements safe, and we all want to keep our implements safe, don't we?? She's doing a flash bit of modelling here. 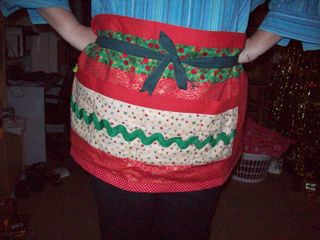 I whipped up some pencil cases for popping in your handbag, it's a variation of the coin purse pattern. 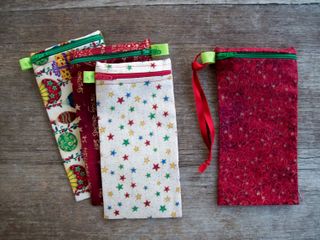 I have to announce the sad demise of the Coles' $10 recipes. How foolish I was to stop collecting the cards and rely on the website they were promoting. It disappeared. I have to say it is no loss. The recipes were nothing to write home about.

This year I have chosen a December Donna Hay magazine and I am just making the Christmas Treat recipes from it. No juggling forty books and spreadsheets of ingredients and shopping lists. I feel a weight is lifted from me!!

Last year I posted some tutorials and recipes: nothing like that will be happening this year, but next post I might make a list of recipe and craft links. Then at least I feel I have made an effort!!

It's a little quiet, I must go and check up on Lorelai Gilmore. Last time it was quiet she was standing in the corner with her head in a cereal box. Apparently she was trapped and when I pulled it off she had to be cuddled and patted till she recovered!! At least she wasn't eating more of my make-up brushes. She's a bit tall and has a long reach now!! Here's Harki, needing a pat and Peri too!! Time for a cup of tea and I will curl up on the couch and craft the evening away.

So many things gave me a giggle in your post today - Lorelai with her head stuck in the cereal box and you reading blogs at full speed with your tongue out and ears flapping in the breeze. Tee hee!

Ooooh, steamed dumplings. I am so craving those right now...

Oh my, Lorelai with her head stuck in a cereal box is too funny, poor dear.

Love the rest of your post, so glad you're having some nice Christmassy times, and are feeling a bit better. I have done stuff all for Christmas, no cooking (too hard on crutches), no cards, no parties, no nothing :/

I wish Daisy would learn to come like Gilly does. She only comes when she feels like it :(

Your pencil cases, apron & face washer look lovely. I haven't done any handmade presents this year....it's all a bit too much.

Your little coin purse came in very handy when we went away....I used it to put my earrings in so I could carry them in my handbag.

We've had the cereal box debacle here too....poor Daisy....she still does it if she can! LOL I'm glad that Gilly survived the box monster OK with lots of pats & cuddles :)

That's funny! As soon as she didn't see you anymore, she came galloping! But all in all your girls are good girls!

Even when feeling poorly, you manage to have a good time! Lovely apron and pencil cases.

love that video :D good thing to remember actually when teaching a dog to come, hide behind something so they want to find you :)

I was once reclining in the bath, having a lovely soak when my pug, Fanny, ran by with a pizza box stuck on her head. So much for my bath.

Are you quite sure I can't come and live with you and the Labradors? I'm very good at making tea.

your girls are so cute! and i love that face washer. glad you are feeling a little better, im sure its the curative power of the steamed dumpling. mmmmmmm. bet they had no $10 coles card for those did they?!

So gald you are better and the social outing adventures continue

I may have to spoil myself with the Donn Hay, I have decided to stop subscribing to delicious - sigh - they just weren't being used enough, but I have decided to use the subscription money to buy cookbooks I really like - oops I seem to have bought a piece of cake which you mentioned and the children are giving me Jamie in America. They just don't know it yet!

Love the LG video. As soon as you were out of her "sight" she got worried. Awwwww! And Peri certainly was at "full tilt", wasn't she? They're such a joy!

Curling up and crafting sounds like some good medicine.

So sorry to hear you have been poorly Cindy! I hope you are well and happy (as well as you can be) by now. I LOVE the apron and the face cloth too and your pencils cases you have done so much even though you have been unwell. Gilly is soooo cute I had to watch it a few times!!!

Looks like you are having so fun with all those Christmas get-togethers. I love desserts & a buffet with unlimited desserts will be heaven for me. The pencil cases look great!

Amazing how well 'dissapearing' from a dog's sight work with 'come' :D

I am still to secure a copy of Donna Hay, I must have a look tomorrow for her. Must write myself a note to bring the Taste.com.au booklet in case your able to come along on Thursday night.

Miss Stash and I played isn't it-is it in the Torchwood finals about Captain John(?) aka Spike.

He he he! Some people's blogs I read with my tongue hanging out, it's not like I am licking the screen because that would be weird.

I feel a blog being inspired! I will have to write another post and soon.

Probably shouldn't laugh, but the mental image of Gilly with her head in a cereal box is tickling my funny bone right now! :D

That's going to keep me laughing for the rest of the day now; the mental image of Gilly with her head stuck in a cereal box!!
:)

So pleased you are feeling better. Gilly is such a sweetie and by the looks of things, going to keep you entertained as well. The cereal box episode did give me a giggle! Wishing you the best for Christmas and of course the Paws as well (tummy rubs all 'round!) xx

Oooh, didn't even need to wait for your reply to my Ravelry question. Just come to the blog instead! Sorry to hear you've been crook, but glad things are improving. All the best for a nice Christmas and a Happy New Year Cindy!

BSODL visits always require a nice cup of tea I find. Hope to chat with you next Brown Owls.