It's been hot again and though I did want to cook some things from the February Delicious Magazine, they all required far too much heat, so instead I settled for something from the Jan/Feb GoodFood:

Chorizo, Tomato and Bean Salad serves 4 It says to use the oven (preheat to 180*) but I used the grill instead and it worked perfectly and was less heat producing. Drizzle tomatoes, cut side up,  with half the olive oil and grill for 15 minutes. Meanwhile, cook chorizo in a pan with no oil, for 5 minutes on each side, until golden and crisp. Wipe pan out and then add the rest of the oil and cook the onions over a medium heat for 5 minutes, then add the vinegar and simmer for 2 minutes, it should reduce by half, and then stir in the honey and mix well.To assemble, on a large plate strew the lettuce, then sprinkle over the beans, tomatoes, chorizo and then pour over the onion mixture, Serve with the crusty bread.

I didn't add any salt or pepper and it needed no extra seasoning. I loved the sweet honey, the salt and chilli of the chorizo, the flavour intense tomatoes and the soft mashiness of the beans all soused in the warm sharp vinegar sauce. The flavours are perfect together and I would make this again in a flash. 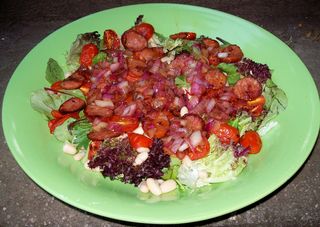 another one right up my alley Cindy! Ta muchly!

Yummo! I have all these ingredients in my fridge and pantry too. Thank you! =)

I'm glad you have a cute earring!

Oh that sounds nice and easy and pretty yummy...I wonder if I could do it even though I'm not a big fan of tomatoes? Maybe! (I have to admit, I'm already behind on my own cooking challenge...but I'll do some this week, I promise!)

'It's been hot again'you say...lucky foryou, because here 'it's been cold again'!! Zero degrees. live in the north of England and it's Winter and then some.
I LOVE all the photos of your doggies!! I have cats,but i love all animals.
Enjoy your summer!