You may know, or not, that my Margaret Pomeranz Guilty Pleasure at the moment is Martha. We're two years behind, so it's December 2007 right now.

Last week she cooked Latkes. I should pay more attention to things because though I knew they were some kind of Jewish food, I didn't really know what they were: potato cakes. There is a whole story about why they are eaten at Hanukkah, and I didn't believe that served this way they would be so wonderful.  They are. The combination of the crispy potato, the smooth sour cream, the slightly sharp but sweet apple and the smoked salmon is perfection.

She used caviar, but I used local smoked salmon. She also added beer, which I did not, I think you would need 3 tbspn added in with the egg and you would need a little more plain flour. 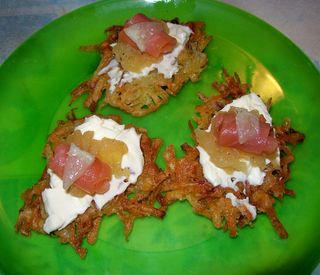 Potato Latkes - makes about 12 small
Drain the grated apples through a strainer lined with muslin or kitchen cloth, and then stand over a bowl till very well drained.
While they are draining make the apple sauce. Cut the flesh of the apple into strips, leaving the skin on, and put into a small saucepan with the water and lemon juice and cover. Cook for about 15 minutes, stirring with a fork now and then, until the apple is very soft. Remove the skin and mash or blend. I mashed with a fork, and despite Martha's assurances, my apples were not very pink, but pinkish.
When you tip the water out of the bowl the potatoes are draining into there will be white starch in the bottom, and this should be mixed back in with the potatoes. Add the onion, egg and enough flour to make it a middling moist mixture. Salt well and add pepper.
Heat the oil in a pan over a medium heat. I had about 2cm of oil. Place small amounts, about 2 tbspns, in the oil and cook till quite golden brown, then flip and cook till golden the bottom side. Push them down a little with a fork to make them thinner. They should be crispy on the outside and soft and cooked through in the centre. Drain and then 'plate up'!!!

Spread on a little sour cream, then the apple sauce and finally I rolled a little smoked salmon. I topped it all with a tiny lemon wedge. The taste is beyond expectations. I ate these really fast and I would have eaten more, except I have promised them to MrsDrWho. Lucky her!!!

mmmmm. i have jewish grandparents (paternal) so that must be why i love potatos so much! these made my mouth water :)

I saw that show too. They lookied so good I think I will go and try to make some.