I was watching Nigella Express a few weeks ago and she made giant choc-chip biscuits. Excellent, MrsDrWho is in dire need of Christmas cooking, because she was in Singapore instead of here during the Festive season.

I asked MrsDrWho to rate them and she gave them 20 out of 10. She also said that she found herself eating one for breakfast and thought to herself that it wasn't exactly a balanced meal, so she picked up another with her other hand, and then she felt completely balanced!!!

Although these are giant, you could make them smaller and thus have 24. Not sure about the length of cooking time though. 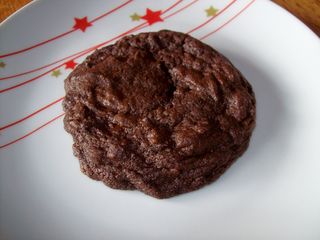 Melt the 125g dark chocolate either over a double boiler or in the microwave like I do!!

Cream the butter and sugars till very light and fluffy, add the melted chocolate, the egg and vanilla and beat till well combined.

Sift the dry ingredients together and then mix in and finally stir in the choc-chips.

Nigella used an ice cream scoop to form the biscuits. I used a 1/4 cup measure almost full. Dip either in hot water before you scoop up the biscuit mixture each time. Arrange 6 biscuits on each tray. Cook for 15-18 minutes. Chocolate biscuits burn easily, so it's best to check early. I rotate the trays and swap shelves too.

Leave on the tray for about 5 minutes and then place on a rack to cool completely.

Then eat as part of a balanced diet, ie one in each hand!!!.

I love love love Nigella Express (she's such a wit) but I haven't made her chocolate biscuits...yet! Thanks for the recommendation. I'll have to try them ~ after all, a balanced diet is so terribly important. =)

finally a balanced diet that I can stick to! :)

OMG YUM! Although I think a truly balanced diet would be one in each hand and one in the mouth as well!!

Ooh that looks SO TASTY!! Will definitely have to have a go at making them :)

yeah that looks pretty good... may have to extend my birthday block so i have an excuse to eat more chocolate :)

i was just thinking about how long its been since i baked anything chocolate. this weekend, i am making these! thanks for the recipe!!

and to be more balanced

OMG Cindy I have always wanted to make these, They look like heaven on a plate..I MUST make them you have convinced me of that

I'm pretty sure that since I'm reading this on Tuesday, they're only half the calories!

Thanks for the recipe. YUMMMMMMMMM!!!