It has officially been hot, hot and dry. Hot and dry, relieved only by rain yesterday, or in Perth's case, the day before when there was a small flood. It was enough to lower the overall temperature and we have had a good night or two's sleep. Before then I was sleeping on, or under, a wet wrung out sheet. That worked too. Probably hideously unhealthy but it was too hot otherwise. We have officially had record long stretches of high temperatures. But there were puddles, and Harki made the most of one at the dam. 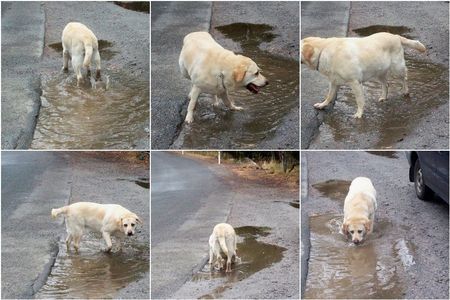 Consequently there has been no knitting or sewing or anything really. We have lain about like beached whales in front of Mr Cooly. Except when Peri and Lorelai Gilmore ran about like Barbarians while I was out and knocked Mr Cooly over and the water went all over the carpet and I had to use my tiny screwdriver kit to attempt repairs. Of course Peri has been hot, but not too hot to sunbake. She lies in the Sun and only comes in when she's way too hot. Hot and sleepy. I love her curled pink tongue!!! 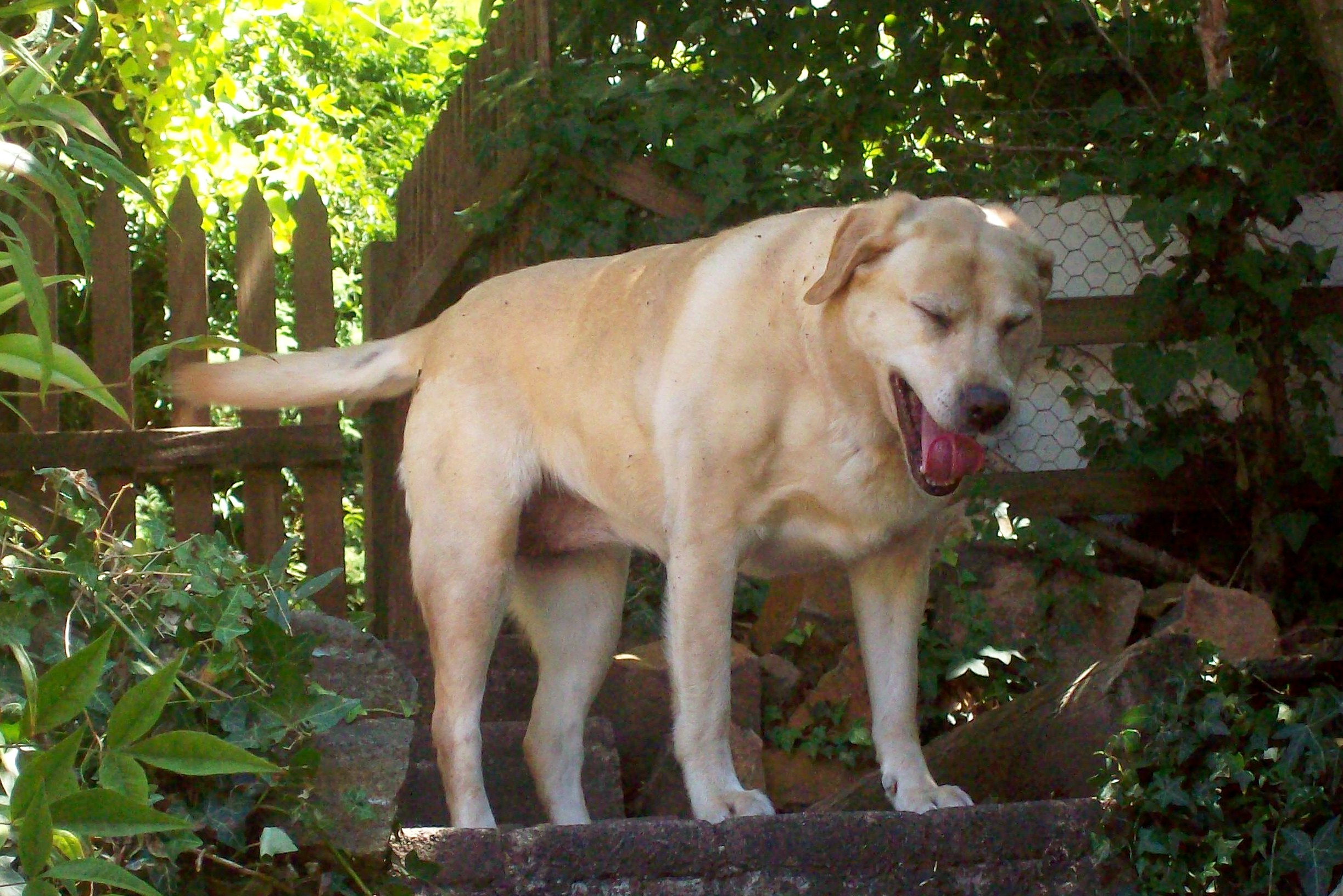 As of today we are in Election mode. I cannot talk about the Election because our Electoral Office seems to have interpreted the rules in such a way that in order to comment, bloggers must declare their full name and address, otherwise you can be prosecuted. That's not going to happen so I must, perforce, not comment until March 21st. Lorelai Gilmore comments about when we will be getting there when she is in the car on her way to her walk. She makes little quivering sounds of excitement and looks all about. Her ears look strange. 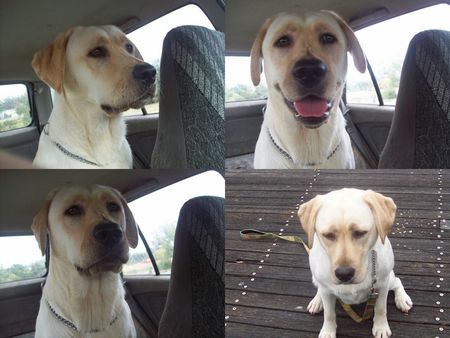 Wee Jock has a new little sister: Bessie. I think it is so nice of her parents to name her after Doctor Who's car!! I have popped along to their house, which is about one minute away, twice, to make sure Wee Jock and Bessie are getting along well. And they are!!! Bessie has grown, she's so much bigger today than last week. I can't take a photo because I left my camera at MrsDrWho's house. Too much Press Gang excitement!! 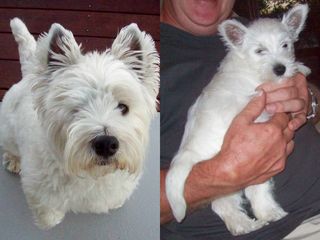 When I get my camera back I can show you pictures of new wool and my visit to MrsValley's house and all the wild life that abounds.

Biscuit update: MrsDrWho reports that the Monday Munchies #6 Giant Choc-Chip biscuits are as crisp and tasty today as they were last Friday. She's kept them in an airtight container and they are good as new.

Lorelai Gilmore is getting a bit uppity so there will have to be some rigorous enforcement of rules. It is really hard to take a photo with all three Labradors. Even harder when I don't have my camera. Luckily I had downloaded one hundred and five photos on Tuesday!! 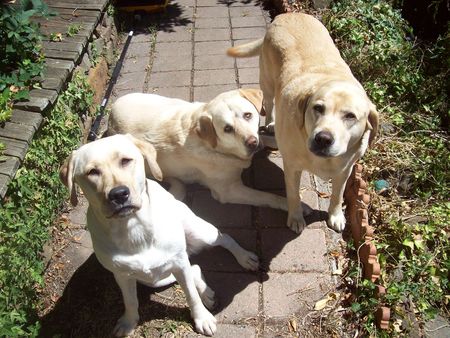 Cooler temperatures are forecast and I hope to make some headway with covering Otto and finishing my Stargate cardigan. It is two years old and bordering on the ridiculous when it just needs the fronts finished and then sewing together. I must update my OPAM sticky post anon!!!

The rules on talking about elections seem very, very strange indeed. How are you supposed to have free and frank political discussions with people if you have to "out" yourself?

I'm fairly sure the old damp sheet trick is actually doctor-recommended. When it got over 20C here I'm sure I heard them say that was the best way to keep cool at night.

Wishing you all the rain you could need!

How lovely to hear of your goings-on. Such heat! If you didn't want to sleep in damp sheets you could try hanging them in the room with the fan blowing onto them and that will also cool the air

It was very hot and humid here too. Thankfully we had lots of rain and it cooled down today. I love the pics of your labs, they must get so hot during the hot weather. The puppy is so cute and what a cute name too!

It is so, so lovely to see Harki enjoying herself in the puddles. Life is full of such simple joy isn't it!!!!??

I can't understand these 'beach babes' like Peri. Maybe their inbuilt thermometers are different to everyone elses. It makes me hot just thinking about her lying out there in the sun LOL

Gilly looks funny sitting up there in the car. She knows exactly what is happening doesn't she!! I hope you have some success in 'bringing her down a peg' Cindy.....LOL

Make sure you tell their parents that Wee Jock & Bessie are very cute!! There's nothing like a brand new puppie is there??.....weeing in the house, chewing the furniture/walls, wanting to play with enthusiasm at 2am in the morning...........

The girls are so beautiful - and I am trying very hard not to make the giant choc chip biscuits...

I may be up your way next week...perhaps I could whiz you off for a cup of tea....

what bizarre election blogging rules!
all dogs so lovely!

I am loving the cooler weather too yippeeee for cool weather. another good reason why I must bake those bikkies!!!! they stay fresh not that they would last long here anyway

hope the cooler weather arrived! :) Harki has the right idea, playing in puddles can't be beat :)

Those election blogging rules seem very bizarre - what are they trying to avoid?

Hope the cooler weather keeps up for you. We've had some good days but now the humidity has returned - ugh!

At least your "Perth" had a little flood. My "Perth" has not had a drop of rain the whole summer. Today is 37C & the rest of the week is in the 30s. Everything is dry & crisp in the garden. Keep cool.

hope you have had some of this rain by now, although without the humidity of course. how lovely your girls look. im not that surprised by those election blogging rules you know, nothing surprised me re state politics these days....