The Doctor Who Fell To Earth

I can attest to the fact that it has been an extraordinarily dry and hot January. The heat has not been of record highs, but of record duration: more consecutive days of hotter temperatures. The Labradors and I have been so hot, and though I sleep at night, it isn't proper sleep, which is why when there was a cool breeze this morning we all went back to bed and slept soundly for three hours. MrsDrWho said it rained at her house last night, but all we saw was thunder and lightning in the distance, no rain. It must all be in Spain on the plain. Nevertheless we are still walking every second day. The bush is very dry.

Harki and Peri heard something in the bush and then they were both ultra alert. They are very funny. It was a man jogging in the heat and when he actually jogged past, they were way in the bush, running after the sound they heard!! In the wrong direction..... 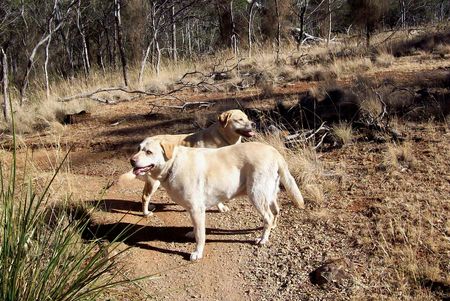 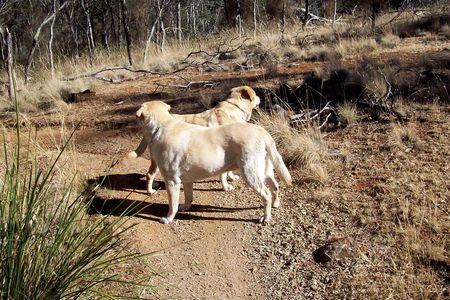 On Saturday I was sitting outside on the deck with my cup of tea reading away. I went inside and when I came back Harki and Lorelai Gilmore were doing synchronised lying. As soon as Lorelai Gilmore realised I had the camera she was up and running towards me. I don't know what she thinks, maybe that the camera is tasty??? They all lie in the Sun until they are too hot and then jump in the paddle pool. 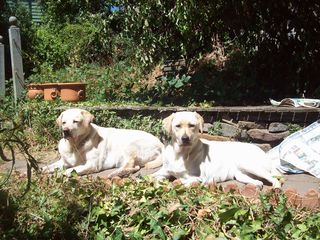 The Dessert Buffet Outing lasted from 6-30pm till about 10pm. The Buffet had lots of fresh fruit, melons, strawberries and passionfruit. Yum, I especially liked the jelly lamington, berries, ice cream and strawberry sauce. My favourite!! 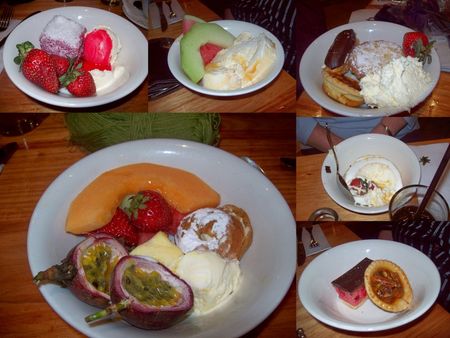 There was knitting as well, and lots of cups of tea!! 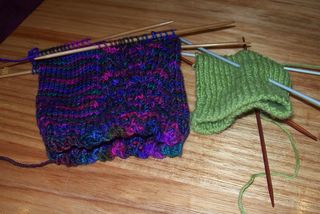 This afternoon, MrsDrWho and I watched The End of Time, the last two episodes of David Tennant's Doctor Who-dom. Usually I try not to pre-empt The ABC, but they promised Doctor Who on January 17th, but now it will be a whole month later. Suffice it to say there were tears, there was laughter, much amusement and many questions answered. RTD certainly had a plan, a plan from the very start of his reign. Now I just have to bide my time till Matt Smith's Doctor appears!!
(No links to avoid Spoilers. People who watch DW know this is The End for Davis Tennant)

Hi 2paw.. I feel your pain with the heat!! Perth has been so hot for so long. That's normal for summer, but usually we get one or two summer storms and a bit of rain to make it easier to cope with the heat. This summer there's no rain about :(

Hehe, Harki and Gilly look so pretty lying together. Tess also loves lying in the sun, but I can't get a picture - as soon as she hears the camera clicking, she races up to join in the fun.

Hopefully autumn will come soon. I'm getting really sick of the hot weather now. Makes me sweaty all the time!!! I definitely prefer the cold weather over the hot!! :P

Anyway, all those yummy desserts makes my mouth water!!

it has been so hot lately, really i can't believe i come from Far north qld, because i can't even handle the high 20s. lots of naps

synchronised lying *te he he*

dessert buffet??? where was i?!

No rain for the whole of January here!

But I need some time to get Autumn cardis knitted.......

those desserts look yummo! We are having a rain weather event with the remains of the cyclone coming down the coast. I would happily send some your way.

I too wish to know more about the dessert buffet. Sounds WONDERFUL!

The dessert buffet looks so yummy & I wish we have one here. I love desserts & I can always skip the main dish so that I can have more dessert. It has been so hot here too & we have the aircon on most of the time.

The hot nights are the worst, aren't they? So hard to sleep properly ... glad the Labs are coping with the help of their paddle pool (or should it be called a Poodle Pool?!).

OMG, those desserts look wonderful. I love anything with fruit and cream (eg PAVLOVA), a winning combination!

I am soo over summer as you know I am over it before it begins! but I am dreading this long hot Feb. Maybe we should watch doc who too I can't wait much longer I know John Simm looks devine with his bleach blonde hair, did you watch it online or is it on dvd???

well Lorelai could eat the camera.....

I agree with the heat. I wanted to leave the airconditioning on last night whilst we slept so it would be cooler but since having it on for 2 days now I seem to feel like I am getting a cold. I hope tomorrow cools down when we are supposed to get some rain. At least your gorgeous puppies can cool down in the pool afterwards! Your desserts look so nice, might have to make some for myself tonight!

oh the end of David T. I dare not imagine it! Isn't RTD just such a great writer. I do love him.

All that dessert! And much of it healthy!

Oooh, toasted labs - yummy! I didn't cry at the demise of David Tennant. I think because it had been hyped so much it was all a bit anti-climactic. I'm looking forward to Matt Smith as well becuase I rate him quite highly as an actor.