Next Sunday is ANZAC Day, the 25th of April, and so I have baked ANZAC Biscuits. Not cookies, never cookies. It is against the law to call them cookies. Really. I never bake any kind of cookies, I always bake biscuits!!

I have baked two kinds on ANZAC Biscuits: one with coconut and one without. I like the one without much better, it must be like the recipe my mum used to make. The recipe tastes too salty for me, perhaps more salt was added to preserve the biscuits?? They do need some salt though.

One year my class researched and found out that in actual fact Hard Tack biscuits were sent to the troops. These biscuits were also know as ANZAC Tiles or Wafers. We cooked some, and ANZACs as well, and then pinned them to the wall in a plastic bag for weeks and weeks. The hard tack was still hard and edible. The ANZACs looked reasonably OK, but we were loath to eat them in case they were bad!!

The method/cooking time is the same for both biscuits, so I will list the ingredients for both recipes and then the Method.

ANZAC Biscuits- without coconut (my preferred recipe) makes about 16 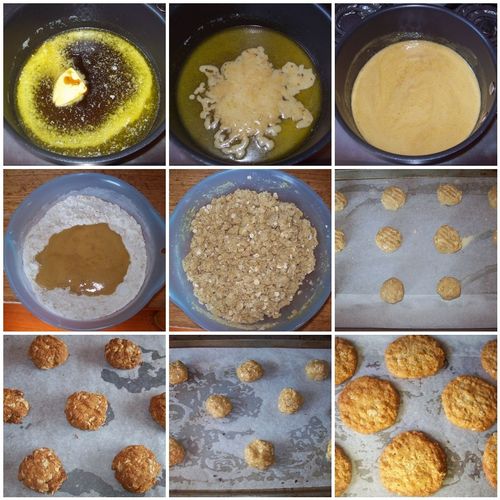 METHOD - preheat oven to 175*C
You can, in a totally apocryphal way, add choc chips, or ginger or even spread the base of the cooled biscuits with melted chocolate!! I don't.

I do love an Anzac Biscuit - with coconut for me. But never never never with choc chips etc!! That would be just wrong! (I am happy to have choc chip hot cross buns though, so I'm hardly a consistent food purist, am I!!)

I might have to see if I can bash out a tray or two of Anzacs this week.

I absolutely loath it when an Aussie calles a biscuit a cookie, it's just wrong.
I love Anzacs, never heard of putting coconut in them though.

I made pumpkin scones this arvo with pumpkin from the garden....Deeeeelicious!

Mmmmmmmm...I sometimes make Anzacs for my students. I'm with you on the biscuit thing too. I love Australianisms (if you know what I mean)and I'd hate to lose them.

I love your pictures...you should write a recipe book..:):)

mmm anzacs. i think i like them with just a touch of coconut, but then im a bit of a coconut nut :) i am looking forward to indulging in some this weekend at knitting camp.

I never really eat anzacs but yours do look lovely!

ooh i think i prefer coconut but I'd be willing to give the coconut-free recipe a go simply because you love it!

They look so delicious & I just realise that they are quite easy to make. I love Anzac biscuits & fell in love with them during my 1st visit to Perth & eating them on a Swan River cruise. That was in the early 1980's & I kept coming back for more. I like them with the coconut.

My very old recipe for Anzacs has coconut in it. Sometimes I use it, sometimes I don't.

Just mentioning because this is a Monday munchie post...Is Coles down your way having another go at promoting Curtis Stone? Local Coles does not have his book but has signs saying ask for recipe leaflets. Bit less of a song and dance this time. Just as well, the recipes were very bland.