I was going to call my post 'An Ice Day for a White Walking', and then I would have shown this very cute photo: 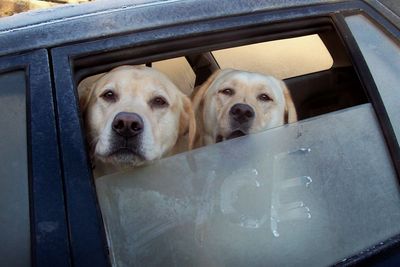 and this very cute video because it was Zero Degrees this morning and the whole of the bush was covered in a crunchy layer of cold white ice:

and then I would have shown you the front and back of my quilt: 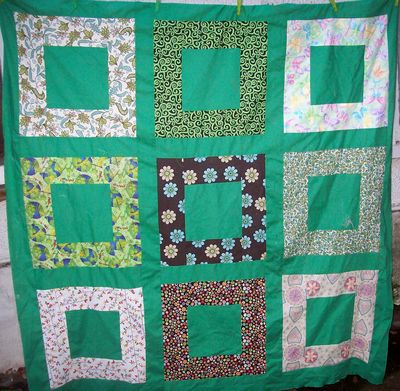 but  I can only show you the front because we had The Incident.

The Labradors will insist on going beserkers-bonkers (running madly about inside) and the last two mornings I've shown them The Lemon Juice and then shut them outside because they were jumping all over the bed. They are heavy when they land on you.

I was sewing the aforementioned quilt and the ironing board was set up next to it and while I was making a cup of tea they ran wildly in and out and under the table and somehow pulled the iron off the board and the sewing machine off the table.

The sewing machine seems OK, it has a bit of the front that has slipped out of the other bit, but if I undo the screw at the side I think I can press it back in, I'm just not strong enough. The iron is fine, it still shoots great clouds of steam on demand.

Consequently I am not talking to them. They are in disgrace. I have been ignoring them since about 2 o'clock. Peri keeps winding around my legs with a toy in her mouth and her tail wagging madly. Lorelai Gilmore keeps leaping up and trying to cross my field of vision and gain some attention. They are really in disgrace. It's not as if they are allowed to run about inside, I always send them out to play. I raise my arm and point my finger at the door and say 'OUT!" in my best Teachers' Voice. And they had plenty of exercise on their walk and we had a big game outside as well. I shall have to instigate Operation Discipline for the next few days and pull the into line.

Oh and I found that someone (Lorelai Gilmore?) has been digging away the back door mat. Revenge for being shut out? Or a misguided attempt to dig her way back inside? It was at the hinge end of the door... 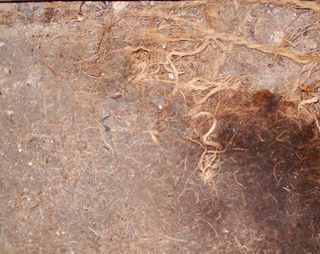 So I consoled myself with four episodes of Terminator:The Sarah Connor Chronicles and some nice knitting in the round. I shall further console myself with a nice cup of tea and an episode of Monk, possible followed by some more Chuck, my latest favourite show. I suppose all's well that ends well......

(but too too cute!!). Hope they will be out of the doghouse soon...

yep we had to throw a bucket of water at our car this morning!

What naughty Labradors! With weather like that I would rather snuggle into the bed than leap all around on it!

tut tut naughty doggies........
mine is driving me nuts as well.

They need to take some lessons from Tess - although it's not that cold here it has been raining for hours and hours and hours - all day really. Tess's response is to stay in her bed tucked up and warm. She's only come out to eat breakfast, and then to have a car ride to the Wonderful Place where we buy doggie treats.

One thing I have realised though - now that I have a car with beige seats, and the rainy weather has started, I desperately need a seat cover for the back seat!! Muddy paws alert!

so the cute photo was BEFORE they fell into disgrace?
I've the same problem here too, always gets worse after dinner time.
Anyway, it looks like we finally found a trainer. I hope we like her, and what she has to say. She'll be here this Sunday, even though it's a long holiday weekend, and she'll be here for 2-3 hours!!! Denny also had his first puppy class last night, but I don't know if we'll continue with that.

Naughty, naughty girls (I'm afraid I am unable to offer advice since I have only had gerbils and rocks as pets). Your quilt does look very nice though.

Oh, such naughty dogs! I know exactly how labs can run thru a house knocking into things. I would have terrible bruises if I knocked into things the way they do. Saffy was in the dog house the other day for running over my flip-flop clad foot and drawing blood! She is not supposed to run full speed right into my legs or run over my feet, but she gets possessed sometimes and does. I hope the sewing machine is ok! I do love the new video and car ride pic.

oh bad girls! bad and cute, an evil combination! i love it when the puppy gets the zoomies like that but it can be dangerous. stick to your discipline regime and they will come round. and at least things arent broken. fantastic looking quilt!!

awww! i love that photo of them :D its very cute. and it is so odd to see ice there when it was so hot here today

sorry about your bad lab report :) maybe they got over-excited doing the ice dancing ! the quilt looks fantabulous - well done you xx

Well, I think the front of the quilt is lovely! I can relate to your incident, though! My iron has landed unceremoniously on the floor a few times, too. I think they are so rotten because the do the sad face so well when they are in trouble.

Has Lorelai been reading Diary of a Wombat by Jackie French? That might have given her the idea of attacking the doormat.

I hope everything continue to work well.

We had a large German Shepherd. On many occasions we only had to look hard at her if she'd been naughty and she'd get up and slink outside. If ever I went out the back in the morning and saw her looking guilty, I'd look around for the new hole in the garden. And they say dogs live in the moment and don't know they've been naughty. She knew.

Oooh they have been naughty. Such a shame they probably just don't understand or better still care!! Hoping that the machine and the iron have survived unscathed in the end as the loss of one or the other would be terrible. We also had ice on the car yesterday and this morning as well, freezing heading off for a swim at 7am with a de-iced car, I tell myself it's invigorating!

Are the pups out of the doghouse yet? ;-)

Oh my! What naughty dogs! I hope that everything is working ok and the sewing machine is back in its usual form now.
I can believe that the labs are heavy when they land on you - the cats weigh enough when they decide to walk on my soft and squishy bits!

I love 'An Ice Day for a White Walking'! Those gals are their very own street gang, aren't they? I can't help but smile when I think of them and I'm glad that no one was hurt during THE INCIDENT.

They asked me to tell you that they're very sorry for what they did.

This might be completely off topic but I love Chuck! I want a t-shirt that says that! He's awesome because he has no abs and is a computer nerd who has a crappy job. These are my thoughts!