No walks on Wednesdays, it is our Designated Day Off, as is Sunday. Yesterday there was quite a lot of running about at the dam. We could hear the wild goats bleating and it spooked Lorelai Gilmore.  Peri knows the sound so she wasn't worried at all. Gilly's running away while Peri surges ahead. 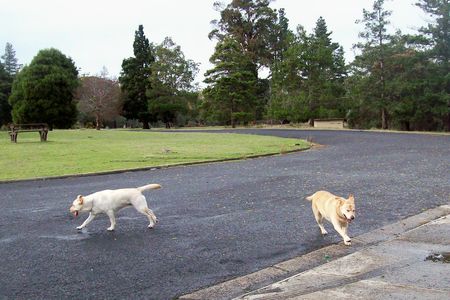 I am in the middle of a Fat Quarter Swap and today I sewed some some squares for the little quilt I am making myself. It is for sitting under on the couch when I watch TV. I am using five of the squares sent to me, which have green in them, and then I have four more from my Green Stash!!  The swaps are the four on the right. This also ties in with this month's OPAM goal: make a little quilt!! Two Birds. One Stone. Say no more. 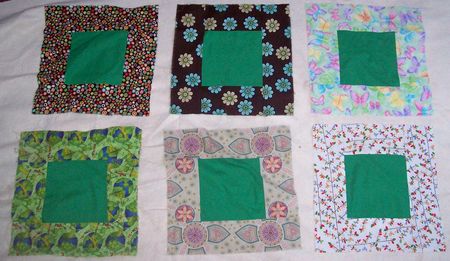 Six squares was as long as I could work for. I have three more to go tomorrow, after I have been to the dentist to have my tooth fixed.

I am knitting up my Doctor Who Zippy Uppy Sleeve. I consulted my Ann Budd Book of Jumpers (Sweaters) and it was easy to rewrite the pattern and I am striping six rows because it is six rows between increases the further up I go, so I don't need to count. 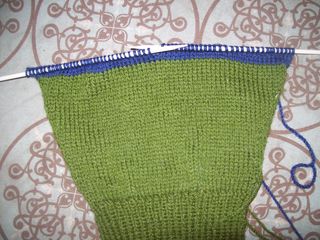 I bought two giant drumhead cabbages at the supermarket. They weigh about 10kg together and @ $2 a cabbage that works out to 40 cents a kilo. The Labradors will be having a lot of cabbage in the foreseeable future!! On top is a large Brussel sprout. I am having Brussel sprouts with my tea tonight. 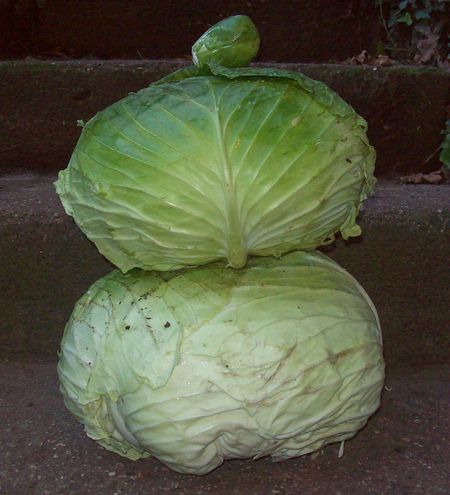 Last week I managed to buy almost a whole other set of Golden Hands. I have a complete set now and Onyi has almost a whole one. Ours were $1 each but Sharon found some on The Ebay for $18 a piece and I have seen them for $5 or $12. So instead of $324, I paid $18 so I feel well and truly bargained up. Onyi and I have both been spending some happy Golden Hands Hours perusing our books. 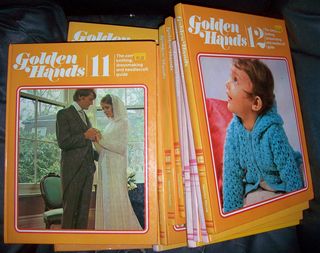 I am not feeling so full of ennui any more, which is a jolly good thing!!! Tonight I plan to knit my sleeve and catch up on some TV. I want to start a new cardigan ASAP so I have to fix the other two before I am allowed.

The weather is turning very cold: in the Highlands this morning the temperature you would experience was Minus 13*C. And snow is forecast down to 600m. Winter is almost here. Hooray!!!

Ohhh, I have a set of "Golden Hands" too! Aren't they fabulous?! I found mine at a Church book sale and I think I paid about $10. I also have a similar set of craft books called "Stitch by Stitch". I cannot resist retro craft books. They call to me. :)

Hope the Brussels sprouts are yummy and the Labradors enjoy their cabbage!

Those are giant cabbages! Enjoy your brussel sprouts :-)

Ewwwwww - brussel sprouts - bleeeecjjjjjkkkkkkkkk! My enduring (not endearing) memory of my other grandmother is walking up her pathway and smelling the yellowish boiled-to-buggary brussel sprouts she had ready for dinner...to go with corned beef and white sauce that tasted like warmed up flour. YUK YUK YUK!

I absolutely LOVE brussel sprouts,I even crave them and cook up a bowl full with a little butter and pepper yumyum.I can't believe it I too bought 2 Golden Hands last week for $1 but thats all I have apart from 5 weekly parts that went into the binders

Wow that's a lot of cabbage Cindy! How will you prepare it for the dogs. Do you have any favourite 'people' cabbage recipes??

You are very clever to be fixing your Dr Who sleeve.

Loving the little quilt and it sounds like you are getting it done none to soon for cold weather use!

so glad to hear you are feeling a bit more sparky, and dying to see plans for new cardigan! go one, just do it, you know you want to!

joyful Peri - on a mission ! the quilt looks great - good for cold nights by the fire :)

Ma'am, you have very large cabbage heads. :-) How do your girls like their cabbage? You are knitting very quickly. I can't even finish a pair of socks!

Hehe..I like the way you phrased your quilt's purpose - "sitting under on the couch when I watch TV". I imagined the quilt hovering in the air while you were watching TV. Ok I may be strange.
I like the idea of OPAM. It is motivating to have a public deadline and goals to meet. Good luck for the rest of the year!

A little quilt! Lovely!
I do hope that cabbage doesn't have the same effect on the Labs as it does on me. If it does, I hope your house isn't well sealed... ;-)
I am not too pleased with it being cold. Brrr! I am not good with cold. Even the water out of the tap is hurting my hands and teeth. Brrr!

Oh, I agree with you on winter. And the brussel sprouts! I hated them as a child but that probably has to do with the way they were cooked. They're so yummy sauteed in a little butter or sesame oil. I've even converted Paul to them - he cooked them last night!

I love cabbage shredded and cooked/steamed in a little butter with the lid on the pan. make sure it's not overcooked. Granny smith apple chopped through it is good too.

How about some Colcannon for yourself. well mashed potato with cabbage mixed through. Add bacon if liked. And Bubble and squeak is so yummy.

Cabbage is not a vegetable I ever buy. Although I do like the sound of Jan's mashed spud with cabbage and bacon.

And I also like the look of your soup and dumplings. It would go down very nicely today, it's windy cold here (although not as cold as Tasmania, I suspect!)

Like DrK, I am excited by your new cardi plans. Hope you will reveal all soon!

That's not a cabbage. THAT'S a cabbage!

Not that I'm implying you are in any way like Crocodile Dundee, of course!

Canny trick of the stripes lining up with the increases!

Borsh! Sorry, a cabbage that size reaction. I really like the quilt, maybe because Linda spent her year after high school, not travelling the world but quilting with her grandmother, who quilted in circles with the other german women of the town. She made two quilts and her grandmother made two and those quilts are still on our beds - there is a continuity in quilting, and though her grandmother is gone, the craft Linda learned lives on, as does a well made quilt.

I want to come back and see how they continue to develop!

Dogs eat cabbage? really? Wow I learn so much hanging out here!

I do love a good savoy cabbage. So crunchy and lovely!

I have a copy of "Golden Hands" too but can't check which issue as my books are now in boxes. Having the floors done & everything is all packed.