Things Of Stone And Would (I Please Be More Interesting)

I, I who have nothing really interesting to share. Lunch with friends, more lunch with friends, waiting to pick a friend up from the airport, afternoon tea with said friend. And it's not as if the weather has been curtailing more exciting adventures. It hasn't. It's been crisp and chilly and sunny. The oak tree outside the back door decided to drop all of its leaves in one fell swoop this week and so we have enough leaves to carpet several MCGs.

No books have arrived for me at The Library, no parcels I am expecting either and I have been reduced to de-cluttering. Not that there is anything wrong with that, but it seems such a sad task to undertake in the holidays. I am trying to be ruthless. Ergo, I must have spent quite a lot of time in the past in a state of 'ruth' for all the cluttering to occur.

Peri and Lorelai Gilmore have enjoyed their walks, whether in the fog or the chilly iciness of Winter. Last week they were suddenly alert, all ears, listening for something. 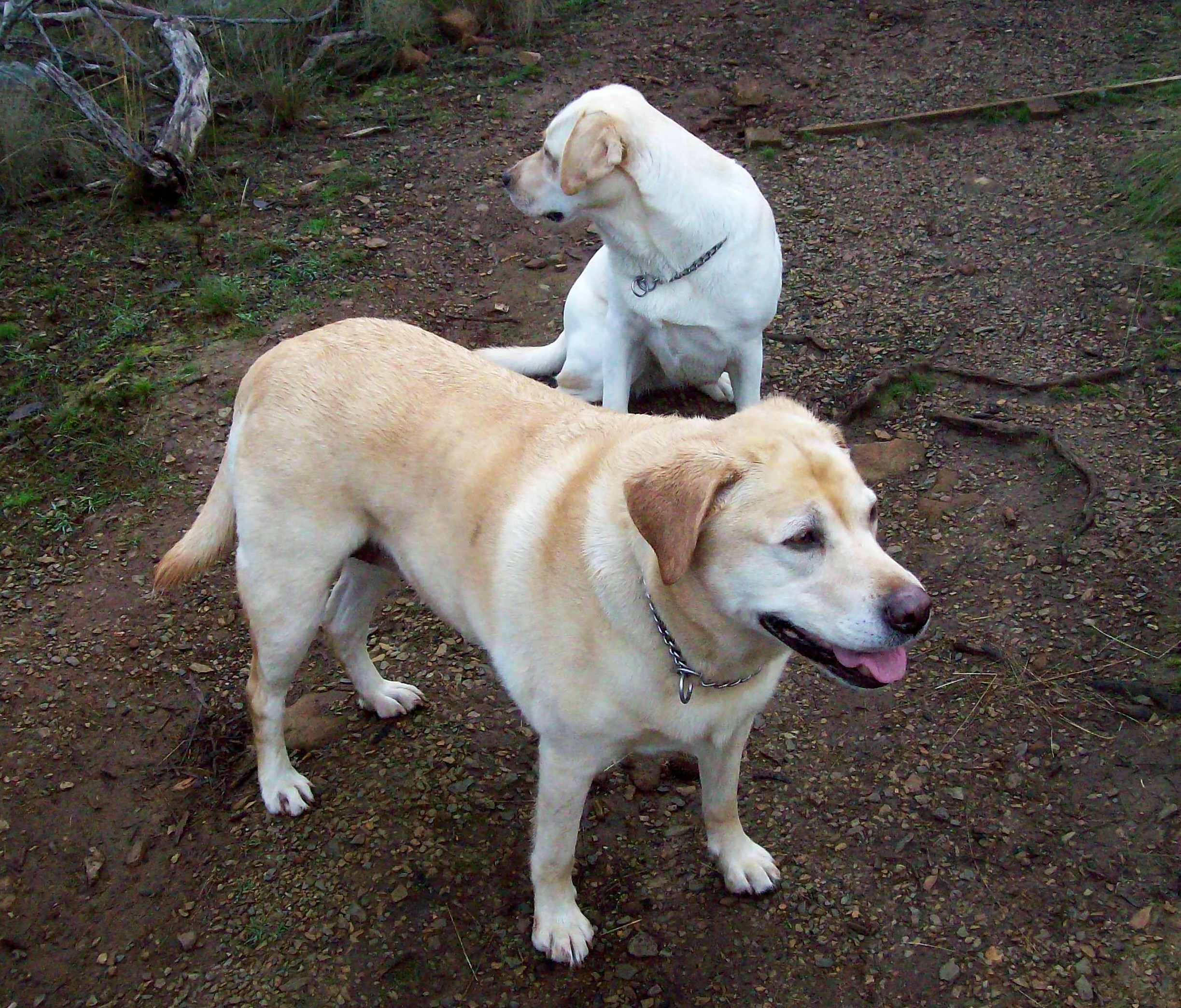 This was the something. 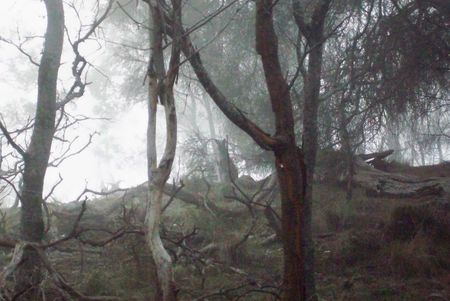 The wallaby stood very still at the top of the hill, nose twitching, for more than just a few seconds before s/he took off at speed. Poor Lorelai still believes she could catch a wallaby. She's dreamin'.

Not a single stitch of knitting or sewing these past few days. Inordinate amounts of DVD watching on the couch with my quilt at home or Farscape at MrsDrWho's house. Yesterday I was extra, extra, tired because on Tuesday evening we went to the Princess to see Rockwiz!!! I am not as huge a fan as MrsDrWho, but I have had the tickets pinned to the cork board above my computer here for ten-ish months. Every day I would see them and then suddenly last week I realised the time had come!!

And now, look away if you have tickets for the show so you won't read any spoilers after the photo.... 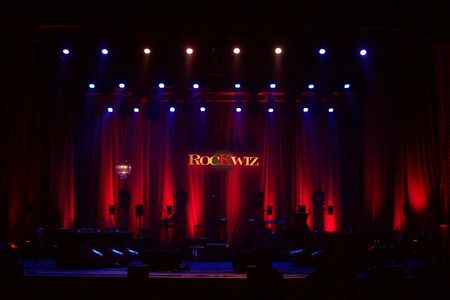 We had perfect seats, Row M, right in the centre. My word it was loud. After songs I was just a little bit deaf.

Brian Nankervis hosted the pre-show at 8pm where 24 contestants from the audience were put through their paces and four chosen. I was extremely glad there wasn't a Blue Ticket under my chair!!

The 'show' began at 9-30pm and it was pretty fabulous. I think Julia Zemiro is great and the band and Dugald too. And Julia and Brian can certainly sing. The guest stars were Ella Hooper (I don't know any of her songs)and, wait for it, Russell Morris!!! OMGCB. He sang The Real Thing. I was a little bit overwhelmed!!! It was very much louder and rockier than this version. I was quite deaf after this and I could feel the waves of sound hitting me. Pretty sure I said "It's Russell Morris" at least a dozen times, but I had only ever seen him on TV, and here he was, in real life: The Real Thing!!! Poor MrsDrWho, who is a woman of the world and has seen far more interesting and famous people- she had to listen to me all evening.


There was an 'unusual' singer called Holiday Sidewinder, I think, and then Dave Faulkner from the Hoodoo Gurus. I did know him and I remember listening to the Hoodoos on the radio when I was at College/Uni. Because let's make it clear, I have been to exactly two concerts in my life and MrsDrWho would pooh-pooh the second (Elton John at the footy ground) and the first was Sherbet when I was sixteen!! The noise and smoke and general rowdiness persuaded me very quickly that I did not like concerts. Little has changed.

I knew one or two answers during the evening but they kept having answers like The White Stripes and Joy Division and other bands with names I vaguely recognised. No Frank, or Nat or Doris. Or Dean or Perry or Matt. Still I was not bored for a moment and I would go again in a shot.

By the time I got home and played with The Labradors and had a cup of tea it was midnight!! I hope Rockwiz tours again soon.

And you say you have nothing interesting to share, and then show us a wallaby in the mist and then tell us all about Rockwiz! How Exciting!!

what a beautiful misty Wallaby - they're very hard to see sometimes when they're standing stock-still in the bush....Rockwiz sounds like it was a great night (though noisy) - maybe we'll see you on tele when it comes on :)

How wonderful for you to go to that show. Paul sits at home on a Saturday night and watches it with pure dedication. I like watching it too. I never knew they picked 24 contestants out of the audience to choose the final 2! I dont think I would have wanted a blue ticket under my seat either. As for the noise, well I tell my kids to be quiet all the time when they get rowdy so I would have probably needed ear plugs, lol! Glad you had a good time.

I would have FREAKED. OUT. if there was a blue ticket under my seat, although I do know who Ella Hooper, the White Stripes, Dave Faulkner (saw him with the Hoo Doos a couple of weeks ago) and Joy division are.....

so glad you enjoyed your rockwizzing experience! you had great guest artists too. Did julia and brian sing at the end for a final encore?

There is an album by Russell Morris called "Fundamentalist" that he put out only a couple of years ago. See if you can find it and listen to it, he does Wings of an Eagle, The Real Thing, Sweet Sweet Love, 1000 Suns and more. It is from the Liberation Blue series of acoustic albums and it is just him and his guitar.
It would be the closest thing you could get to having him sing for you live in your living room and reliving Rockwiz.
I'm with you, I'd be sitting there saying "It's Russell Morris" over and over again too. I am sooooo jealous! ;-)

I love that song! I know it only has a few words, but you can sing it tipsy without forgetting any of them, it has funky synthesiser effects, and it sounds like listening to the radio or LPs in my childhood! Thank you for the embed link, it was a lovely interlude in my Thurs evening.
PS I love Rockwiz, as does the MOMD, and Julia Zemiro is completely awesome every time!

Love, love, love the misty wallaby pic! Rockwiz sounds fabulous. I actually had tickets as well (to the Perth performance of course) but couldn't go because I had too much paperwork ~ how sad is that?
...and I went to a Sherbert concert too!!! I actually didn't like them all that much ( I only went because Dragon were on the same bill) but I was fourteen so I screamed anyway. =)

You are never boring! What a night out you had! Sounds like great fun. You must have tunes still running thru your head.

Chasing wallabies sounds like great fun to Saffy and Silas who looked at me intently when I told them that a wallaby was much bigger than rabbits and squirrels and the neighbor's cat who walks thru the yard several times a day (and apparently needs a scolding/barking for it every time!).

Sounds like you had a great time at the concert!

There are naturalised wallabys on the Isle of Man in the Irish Sea. They escaped/were released and they now live in a temperate swap in the middle of the island!

I don't know if I could cope with the noise of a concert anymore, but I'm glad you & MrsDrWho had a great time.

Wallaby in the mist.....sort of sounds like it could be a movie or something doesn't it. Oh that unrequited Wallaby catch...poor puppies....lucky Wallaby!!

So glad you've had such a healthy social life Cindy :) Hope you recover from all that socialising quickly.

i hate to think what would happen if sky saw a wallaby o.0 they always think they will catch something fast, and try their hardest to. in their dreams they do catch them of course :)