Like sands through the hourglass, so are the days of our lives. Where did the week go? Now, Unsuspecting Reader, I shall tell you!!!

Lorelai Gilmore nearly gave me a heart attack. I was throwing her toy up the backyard, and I mean up: it's terraced, so I was throwing to the next level. She took off from a standing start just inside the back door and then scaled the retaining wall about three metres away in one single bound. It's 135cm high. She leaped up the wall and found some kind of purchase with her back feet on the way up and suddenly there she was at the top. To her surprise and mine. She hasn't done it again. Thank goodness. 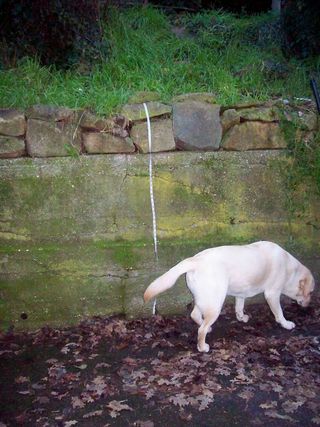 On Tuesday we won at Trivia: Hooray for us!! We had MrsDrWho's brother (Mr Macau) and her sister (now Mrs Singapore) and our table was complete. We hardly ever have eight people. I gave MrsDrWho her George Cowl-ey and her Mr Spiggott Socks and they were duly admired and the cowl modelled.

We had lots of walks, late walks, because I have been sleeping in. The puddles are covered with thick ice and it has been raining but that doesn't deter Peri and Gilly loves a dip the creek.

The picnic area at the dam is being given a face lift with a new fence. Peri and Gilly were not quite sure about it at first, but Peri has now given it her grin of approval. The grass and even the gravel is all icy.

There has been some Doctor Who catching up at MrsDrWho's house, but I still have three episodes to watch and tomorrow's final as well.

I sewed a new cover for my hot water bottle.That's some polar fleece, I think, and some sock wool as the blanket stitch. It's really a big specially shaped envelope!!

Thursday night was Sewing and I gave MrsDrWho the next in her long and drawn out birthday present parade: Mittens with the Starship Enterprise on them, and it's ID number too. I found a 4ply pattern (Ravelry link), but I was using 8ply Luxury so I had to adjust the chart and MacGyver a pattern to make it fit.Here they are: 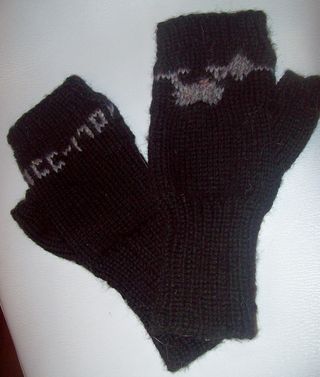 and also again modelled with Mrs Reno's ever so cute puppy, Jubbly!!! 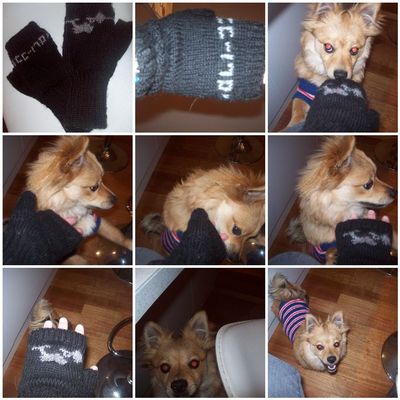 On Friday I cooked, again, and went to The GardyGardener's for afternoon tea. I am knitting Mrs GardyGardener some mittens with fingers. I also made two cakes and some delicious pork and apple sausage rolls, which we ate before I remembered to take a picture!! I made little pizzas with cream cheese. marinated olives and pancetta. Yum!! There's some Amy Johnson and Kiss Biscuits too. I love my oven, the novelty has not worn off yet!! 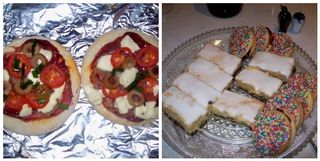 Today we've been for a walk, I popped into the Library and I have been lying on the couch watching TV and sewing my Annus Vestis. I have, not unsurprisingly, put July 1st to the 4th somewhere safe. Where that is I am not exactly sure, but the energy efficient lights make it too dark to photograph July 5th to the 10th anyway.

Peri Naughty and Lorelai Gilmore are fast asleep on the couch, the rain is making that nice sound on the roof and the wind is whistling around outside. Time for another cup of tea and some Doc Martin anon!!

It is nice to be inside whilst it is raining. It must be very cold where you are to have ice on the paths. We have just had strong winds today which were a bit scary and a bit of rain. Your gloves seem like a great idea. Perhaps your week rushed by because you have been baking away!

Wow you have been busy! I'm impressed. Love the Starship Mittens they have come out well.
Thank you for your kind comment on my cardigan. I am well pleased with it.

wow you have ben busy Cindy!! and those mittens are fabbo, it's wonderful you can MacGyver when need be, he is such a legend his name is even a verb!! When we use his name we crack up then have to explain to the girls how amazingly clever he was!!

Oh, that Gilly! She sure has a lot of puppy in her still, doesn't she? Silly dog. And I can't believe she gets in that frigid water! Love your mittens.

I love the video! Will show that to Jeff when he gets home. They are so much like Saffy and Silas. How they would love to play together! You are getting so many great projects done and I get hungry every time I read about your cooking!

That was a big jump, especially for a pure labrador! I don't think they are shaped for very vertical jumping. I always think it's the shepherd part of Silas that makes him able to jump so high for tree branches and such. He would love your terraces. It would be up and down all day!

I love hearing you call the girls! Your knitting is great - those mitts, especially. Jump, Gilly! JUMP!! :-)

No wonder your week disappeared when you were so busy!

Gilly must have been eating some jumpig beans - that's some high wall!

The Dogs! The Knitting! The Food!! No wonder the time goes so fast - there is so much going on!!! (and those bikkies are making me hungry - I hope my hubby hurries up with the brownies...)

You've done a me! I put part of my current quilt "Somewhere safe" and I have no idea where it is, and I can't finish the blessed thing until I find them. 8-)

And those little pizzas look delicious :)

Forgive the lack of comments (I'm still recovering from my hols!) but it certainly looks like you've been busy!

Are you thinking of putting some fencing up on the terrace or just hoping Gilly doesn't remember what she did?!

thats a pretty big leap gilly!! my heart stops when sky does that and she looks at me like "what, this is easy. give me a higher jump :p"

the cover for the hot water bottle looks great, so much better then the plain bottle