Three Quarters of the way through the year. One quarter left to go. Thirteen more recipes.

I was wandering aimlessly through the supermarket and had no idea what I was going to cook. I was decidedly unprepared, which is unusual. I gained inspiration from the back of the tetra pack of stock!! So here is a nice vegetarian dish. It's actually very nice, I have been back in the fridge stealing bits and bobs, Nigella-like. I was too lazy for a rice accompaniment so I used my fall back accompaniment: couscous. And I also found some Paneer in the deli so I added that too. It's not in the original recipe and it's optional. I would have almost everything for this recipe in my kitchen and you could easily add some chicken or lamb to make it a carnivore's delight!!

Over a medium heat, fry the curry paste for a minute and then add the potatoes, sweet potato, lentils and stock. Oops I added the peas too early, it didn't seem to matter. Bring to the boil, cover and lower the heat. Simmer for 20 minutes, stirring every 5 minutes. 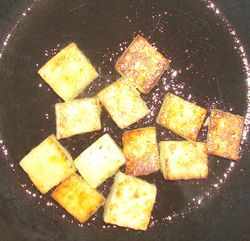 Meanwhile if you so choose, cut up the Paneer and fry it on both sides in some olive oil until it is browned and crisp. It took about 6 or so minutes. Then drain on kitchen paper.

Now add the baby spinach and the yoghurt and stir for 2 minutes until the spinach is wilted. Serve with rice. Or couscous if you are lazy like me. Arrange the Paneer attractively on top. This is a very tasty and quick recipe. 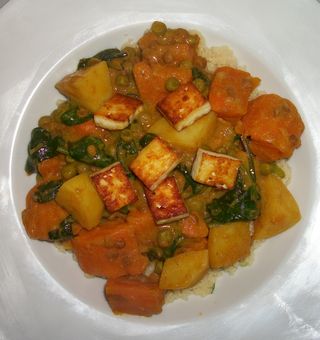 That sounds like something from the kitchen here, right down to the couscous. Son maintains he was forcefed rice six days out of seven as a child and he never eats it now except as sushi, Not even my very good risotto. Obviously we used rice but nowhere near as much as his distorted memory makes out.

I haven't added paneer to that dish, but have used chickpeas in addition to lentils and if son made it, there would be fresh chillies in there too.

ooooh yum, that looks and sounds delicious! I never make curries or use couscous, but I really should give that a go.