There's Many A Slip 'Twixt The Cup And The Tip

It goes without saying that the floods in Queensland and NSW are too awful for words. We have some small floods here too, but nothing like on the Mainland. For about the fifth time today I have read or talked about Dorothea Mackellar's poem, where we are a land 'of droughts and flooding rains'. We are indeed. The agony and the ecstasy. The sublime and the ridiculous. That is our island continent. 75% of Queensland is flooded. I can't conceive of how vast that must be. All I know is that I wish the media would stop being so intrusive and leave people be. That would be very nice. I was watching TV in the hospital waiting room and the studio presenter asked the reporter at the evacuation centre to pan the camera around to show the whole centre and not to worry if it looked a bit messy. Honestly, they need to gain some perspective. Ny friends in Emerald have been flooded out, but they are safe. My sister and cousin and their families south of Brisbane are safe at the moment too. I am lucky.

Speaking of lucky, I am also lucky to be  cared for so well by the staff at the Holman Clinic, and The Labradors likewise by the Doctors and Nurses at their Hospital. I did two more jobs yesterday and today and took belated Christmas gifts. It has been cool enough to cook, and so I did: lemon and passionfruit melting moments, chocolate cupcakes with M&Ms, Christmas cupcakes with lemon icing and a cherry on top, gingerbread stars, Nigella's fudge, almond macaroons, cherry coconut ice and decadent chocolate biscuits. 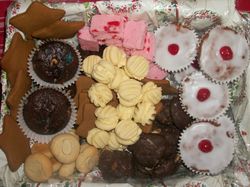 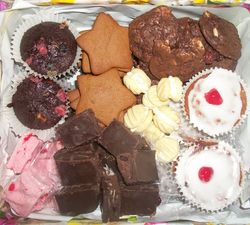 Peri went to see Dr Tim today for her yearly check up and vaccination and to be weighed. She has gained health and lost anther 600g. Dr Tim couldn't believe Peri was nine. I showed him baby pictures of Peri and Vundy. Dr Tim remembered all the dogs that have lived at our house. Peri still has a way to go, another four or five kilograms, but she is doing well. He gave her a special liver treat!! She was so bouncy and excited and happy. 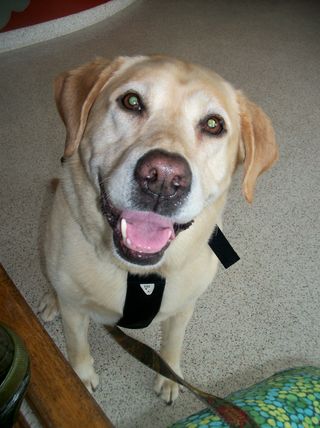 Dr Tim asked after Miss Gilly: she was at home, alone, with a special treat!! Here she is looking lovely on our walk today. 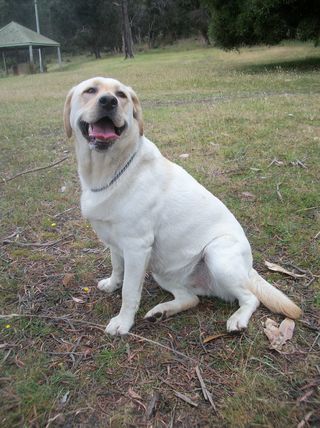 They have been playing rough and rowdy rebel games inside and I had to say 'OUT'  in my cross voice and point towards the back door. And the prize?? A plastic cup. When they are too excited to listen properly, I decide I will have the cup and it goes into the recycling bin and off to the tip. Lorelai Gilmore starts it, and then Peri joins in and there's a riot. Wicked Labradors!!!

The people writing the EPG guides need to brush up on their spelling. I was scrolling through the channels in a desultory manner, and did a double take when I saw this. I had to go and fetch the camera to take a photo!!

I have finished one Harry Feet sock for MrsDrWho, and I am very excited to use my new sock blockers. It does make the sock look ever so wonderful!! They were such a lovely and thoughtful gift!! 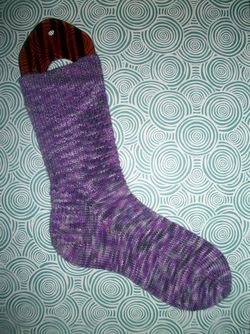 I sewed a birthday bag for a friend who has a cat. It's just an ordinary tote bag, but she liked it and the straps were the perfect length. That was a fluke!! 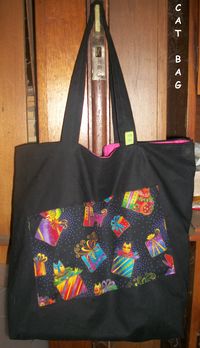 I decided it was time for a new avatar in 2011, and I managed to get Peri and Lorelai Gilmore close enough together so that they would fit into the requisite avatar box. 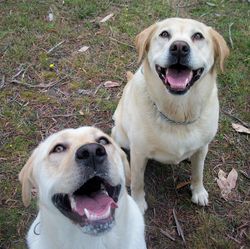 The weather has been quite rainy and humid and gale force winds and torrential rain is expected tomorrow. I had washing on the line all day and it just wouldn't dry. I think it is cool enough to sleep now, so we are off to bed anon, with a cup of peppermint tea and maybe the crossword. I like to time myself and do it in less than ten minutes. It has cryptic and ordinary clues, so I expect that's cheating a little.

The floods look horrifying on the news. I feel so badly for all those people...also their pets and livestock. Last night, the news showed horses in the water, I think trying to rest their heads on the edge of a roof. But your cookies and treats look so cheerful and I'm sure they are much enjoyed by all. I love the new avatar! Give the pups a pat from me and tell them about all the snow we are wading through here. We can't do proper walks, but we play and run a lot in the backyard. Catching snowballs is the favourite thing!

Jigalow? That leaves some ideas bouncing around in my mind. All pure and clean of course! I would guess that the person who originally wrote that had absolutely no idea of error and saw nothing wrong in it.

I very much like your bag and the avatar as well.

those treats looked very yummy - I'm sure the Holman staff would appreciate them, they do a wonderful job and are well deserving :) Love the doggy pictures and glad Peri is doing well. It was heartening to hear of all the animals fostered out from the RSPCA depot that got flooded - there are a lot of good-hearted people in the world !
Glad to hear your family are safe and dry x

oh, just a bit of baking there then?! sheesh! so much yum in one little box. yes indeed we are lucky, but how quickly we forget it. im so glad you and the girls are being well looked after too.

awww what pretty smiling girls! :D great pic of them

that is a lot of treats! would probably make myself ill trying to eat them all :p

we give sky the plastic bottles so our living room looks like a bottle graveyard lol they are everywhere, but they keep her amused for 10 minutes lol

My goodness, you are enjoying that new oven! Look at all those yummies!
I hope you don't get washed or blown away today. Weather here is a bit feral. 23C overnight! Windy and rainy at present. Blah.

The baking all looks wonderful.

Oh your doctors and nurses are very lucky! And of course I love your avatar!

The girls look so happy in that photo! I agree that the coverage is indeed intrusive and excessive, We know it is happening and it is devastating with many people around the country worried about friends and family in those areas. I tuned off from channel 7 because I didn't like the tone of their reporting- I found it quite sensationalized. A friend of mine made the comment that some of the people he works with are becoming desensitized to the situation with the constant replaying of the stories. I don't know how you possibly could my heart breaks for the people and thank the powers that be that my son was in the 25% of QLD not flooded!

I am refusing to watch the 24 hour coverage, it's just ridiculous. I watch the ABC news and that's it. It's just horrible the way it's all been so sensationalised. I have a cousin in Emerald and he was lucky, after a big flood a few years ago he had his house raised by at least 1m. This time, the floods just lapped at the floorboards, so he was lucky he took action after the last one.

You are so kind and lovely to take all those lovely treats to the vet and hospital staff (now wishing I was a vet or hospital nurse in Cindy's neighbourhood!)

And it is a lovely new photo of the girls for your avatar!

I'm sure the healthcare staff will be muchly please with their treats (as Peri was with hers!)

I wouldn't blame the TV guide people too much. Jigalow does rhyme with Bigalow, does it not?!

You managed to get a great shot of the girls for your new avatar - how did you manage to get them to sit still long enough?!

News crews are horrible. Enough said. Your baking looks delicious, I'll bet even a Jigalow (ha ha ha!) would enjoy all of those sweets. Soon Peri will have her own show on doggie weight loss. Gilly can be her lovely assistant.

Intermesting isn't it. Have we heard much about the terrible flooding in Brazil? Worst in their history and I think over 300 dead with mudslides etc? I know it's not local news but the 24 hour beat up is too much now I think.

I am always amazed at how mch baking you turn out. I think I would be a bigger side of a house if I lived near/er you.

The smiles on those doggies faces always makes me smile.

woowh you have been busy. Unlike me, I just want to finish my jumper. The dogs are keeping my company as they hide inside from the wind.

You have been very busy this week Cindy, cooking, sewing & knitting!! I'm sure that all of your recipients are very happy with their gifts :)

Delicious treats Cindy! Loved hearing about the cup shenanigans and seeing the photos of the doggalogs. Very glad to hear you have a great troupe of people giving care to you and the pooches :)
I hope you enjoyed your nap and crossword! I'm terrible at the cryptic ones, couldn't do one in 10 hours let alone 10 minutes!

I hope you continue safe and dry in your part of the world.
Those goodies are a delicious thank you!
Maybe if I got sock blockers it would inspire me to knit socks.