Just the other day it was announced that a team of scientists are definitely going to try and clone a woolly mammoth. I know mammoths aren't actually from the Jurassic, they're from the Quaternary, but how could I resist. I heard a science commentator being interviewed on the ABC this afternoon, and the general feeling seems to be that if they do succeed, it will be Barnum and Bailey all the way. I, for one, shall not go and stare at the poor woolly mammoth. Ever. 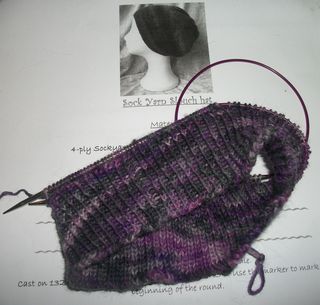 I have started the second part of MrsDrWho's Christmas knitting : I have called it Hatty Potter. It's the same wool as her socks and I am using the Sock Yarn Slouch Hat as my guide. It has 20 rows of twisted rib. I abhor twisted rib, still, it looks nice and holds its shape well. I didn't have the right needle, of course, so now I have new 3mm steel ends on the cable and at the moment it is too long, but since I plan to do some yfwd increasing soon, it should be OK. I popped over to see MrsDrWho today just to see if it did fit, and thankfully I didn't have to unravel all the rib.

Peri and Lorelai Gilmore have been enjoying their walks, Gilly cries if we don't go up the road when we reach the roundabout. Today we met Sandy the tall Labrador and they ran and chased and played for ages. I don't have a photo because I was talking to Sandy's dad and we were both keeping an eagle eye out for cannonball Labradors bent on running through us, not around us. They were all very good, and we were superfluous!! Gilly does not like it when Peri is on the other side of the fence even though she can walk round the fence and get to be on the other side. There are a lot of good smells on Thursdays. Smells that have acccumulated all day Wednesday when we don't go for a walk. 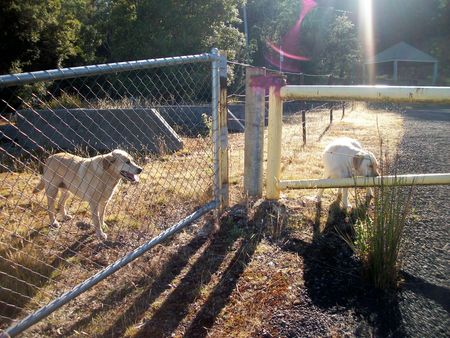 I have had a sock emergency, I went to wear my Stryperdrive socks this morning and one has a hole. Oh no. I have put it aside until I can bear to deal with it. I know I can fix it, but I need to have all my knitting surgery wits about me. I don't know how it happened. It is a Mystery. 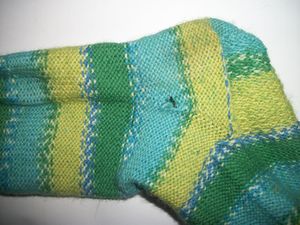 I have just realised why I am feeling itchy, I have my top on inside out and the frills are not where they should be. Sigh. I should not be allowed to look after myself, let alone Labradors. I didn't go out like this, I had a nap and then we all got up and dressed again and made dinner.

Yesterday I laid on the couch and partially deleted all the ads from five episodes of White Collar and then watched them all while I knitted twisted rib. Soon 'real' TV will be back and everything I want to watch will be on at the same time. It always is.

I have to get my act together because a craft group I am part of is having a table at a market to raise money for The Floods, somewhere, sometime soon. We are meeting next week to gather together all the things we have made. I have made nothing. So over the next few days I will be sewing some little Owls (I asked Claire if it would be OK, and she kindly said yes) and making some zippy bags out of crisp packets. I can't sew during the evenings, so I must not have an afternoon nap and I can sew then. I might try a morning nap instead. Peri and Gilly don't mind when we nap!!!

after being without a labrador for over 15 years, i'm finally able to welcome a puppy home. can you please give me some advice and tips on how to find a reliable breeder? thank you!

Oh those little owls are just too cute!! I'm sure they will be snapped up at the stall.

Paul always checks me over (surrepticiously of course!!) if he's with me when I go out anywhere. So you're not the only one Cindy that needs the fashion police! LOL

I will be very interested to see how you repair your sock. I have a knitted top that has a hole in it that I haven't got a clue about where to start to fix it :(

I'm glad the 'girls' got to play with Sandy. Poor Daisy doesn't get to play with anyone. She has a cousin, Charlotte, that she sees very rarely, but every time they play together, her dodgey leg gets sore & she limps for a week afterwards :(

MrsDrWho will be very matchy, matchy when she wears her Hatty Potter with her new socks....lucky MrsDrWho!!

Your hat looks great so far. How do you make zippy bags out of crisp packets?

I am so with you on the Woolly Mammoth. Isn't it enough that we cage "modern" creatures? Now we will cage extinct ones, too. Perhaps it would be better to try and save the animals currently going extinct than to bring back ones that already are and that don't have a niche in this modern world. Good luck with your holey sock and with your crafting for the floods!

Oh! OWLS! I love Owls! I may also have to invest in a knitted farmyard, because my children saw your pictures! Happy new year - (late but just catching up with blogs! And pats for the dorables!

That slouch hat will be beautiful. What is the yarn? I love the purple/black colorway. A hole in your sock! I feel faint!!

stupid scientists. how about your spend your time and money figuring out how to save the stuff we still have left on the planet, rather than bringing back things we already killed. bah humbug. looove the slouchy hat tho, yes twisted rib is painful to do but looks great when done. naps with pups are great arent they?

Egads, a hole in your sock! (I couldn't resist!). I hope you have a darning egg/ mushroom? I darned some socks a while back and it wasn't as hard as I expected, thank goodness.

The owls are lovely, I'm sure they will be good sellers. And I'm with you on twisted ribbing - or ribbing in general, really - a bit of a pain to do but it looks really good.

Good luck with the craft table. I was very sad to hear about the floods - I hope that people are starting to get their lives back together again now.

I don't like darning socks & I have a few socks with holes in them that I have put aside for ages. I prefer to knit socks than repair them.