Tuesday's Letters Eat 3: 'B' is for Banana

Finally Martha's Cupcake book arrived from the Library: very exciting!!! The Floods on The Mainland mean that soon many fruits and vegetables will be four or five times their normal price, so I seized the day and bought some bananas before they were $20 a kilo. There was a roasted banana cupcake, so it was decided for me. In this recipe they separate the eggs and then whip the whites and then fold them in later. I have no truck with this, unless I am making a meringue, (or parfait, mousse, friands) I am all for beating the eggs in straight from the shell. And so I did.

I used an ordinary ice cream scoop to fill the paper cases and the mixture made 18 cupcakes.

Martha makes a Honey-Cinnamon Frosting. Instead, I whipped up the trusty Lemon Cream Cheese Icing that we all seem to prefer in Australia. Well the people I know do. I'll include both options.

Martha says to roast the bananas,then whilst they are in the oven and cooling, then cream the butter and sugar. I found it took the bananas about half an hour outside to cool down enough. So roast, have a cup of tea and coffee, and then return to the preparation.

Preheat oven to 200*C and roast the bananas in their skins for 15 minutes. They will turn quite black and mine oozed a little liquid, so use a tray with a lip!! Cool for about half an hour in their skins.

Turn oven temperature down to 180*C.

Cream the butter and sugar till pale and fluffy. Add the eggs and beat till well combined. Then finally slip the cooled, roasted bananas in. Without their skins!!!

Beat in the bananas, then add the sifted dry ingredients in three batches, interspersed with the sour cream. I followed the recipe and used my mix-master to beat the mixture and the cupcakes are not tough at all, still, I was worried!! Finally add the vanilla and the mixing is done. 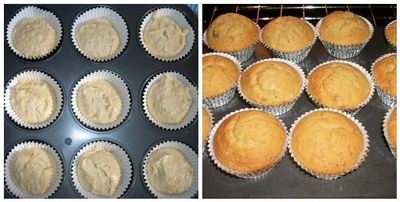 Fill the paper cases and bake for 20 minutes, rotating the trays and swapping between shelves if you have two trays at once. A skewer inserted into the cake should come out clean. Cool on a rack and then ice. The un-iced cupcakes can be frozen for later on too. If you want to add some fresh banana it is best to do it just before serving. You can sprinkle the banana slices with lemon juice, which I like, but some people don't. It is to be hoped the cupcakes are wolfed down before the banana can brown!!! 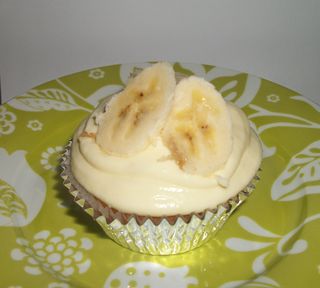 Beat all the ingredients until smooth and creamy. Can be refrigerated for 4 or 5 days too.

Beat the cream cheese, butter, lemon zest, juice and vanilla together until light and cream, then gradually add the icing sugar. Whip till light and fluffy. This can be refrigerated as well, and I have even frozen it in a ziplock bag.

If you put your bananas outside to cool in what you think is a safe place, you may catch a Labrador about to take a bite!! Gilly was trying to be far away from the bananas at the very bottom left of the photo by the time I fetched my camera!! 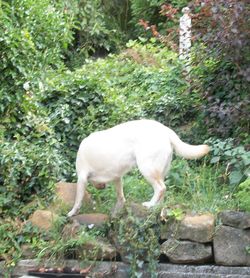 Naughty Gilly, she could have burnt her tongue.

I still remember the first banana cake I made after getting married. I put lemon icing on it as I liked and as was the custom I was used to. Husband took one bite and spat it out. His aunt had always made that cake for him and iced it with extremely sweet caramel! I utterly refused to make caramel icing, so he learnt to endure the lemon. Once after anther complaint, I didn't ice it at all. That was no good either.

Yum! I am so glad B is for Banana, because I love banana-y things! These look delicious. I think the honey cinnamon icing might be ok, but I think that cream cheese icing is much nicer (the Americans seem to totally love their buttercream icing, which I assume the honey-cinnamon icing is a relation of).
I'm very glad Gilly was sprung before she could get up to any banana mischief!

Mmm, that sounds delicious! I love bananas. What does the roasting of bananas do for them? More intense taste of bananas?
If I would stumble upon a cooling banana, and nobody there to see me doing it, I would take a bite too! :o)

Naughty Gilly! Shame I can't eat bananas, but I do like the sound of the frosting though!

It's been lovely catching up with your adventures over the past week. You have, as always, been very busy :-)
Just curious, does roasting the banana have a significant effect on the flavour of the muffins?

sneaky gilly :p not sneaky enough tho it seems :p
i love bananas, so will have to make these :) and try the honey and cinnamon icing, that way hubby wont eat any. he hates cinnamon :p

Those look lovely! I'll confess I'm not a fan of bananas, but I do love muffins.

I'm sorry to hear about the flooding, and I am glad that your friends are safe. I hope it is not an insensitive question, but is Tour Down Under (the bike race) still going on as planned? as I recall, the routes are usually in South Australia.

I love your recipies!!!

Sorry I have been remiss in popping in to say hi. I miss my apple. But I love your bananas!