I am a worrier. It's in my genes. My pop was a worrier, my mum is a worrier and I am too. I try not to worry, but even when I am feeling happy and content, there's an undercurrent of worry running deep below in my subconscious.

This week I am worried because I have a rash of tiny lumps on my arm at my elbow, I pricked my thumb with the stalk of a lemon and I am worried I might get tetanus, and then I patted Peri and felt a hard lump on her shoulder. That would be her shoulder bone. Apparently she has been covering her bones with a layer of fat and I have never felt them before. My thumb doesn't have a red line of infection racing up it, and I am still able to talk, so my jaw is fine. The rash is still there, so I still have a worry.

I think I like to fill my mind with small worries so I don't have to deal with the big worries.

Xena:Warrior Princess is being shown on TV and I am watching every day, from the start. Tonight The Sweeney begins. I used to love that show, so it will be interesting to see how it holds up.

I finished MrsDrWho's Hatty Potter. It is very slouchy and when I took a picture it brought to mind the hats The Goodies wore in the Eckythump episode. The colour is more correct in the top photo. It is exactly what she wanted and far too hot to wear until Winter. 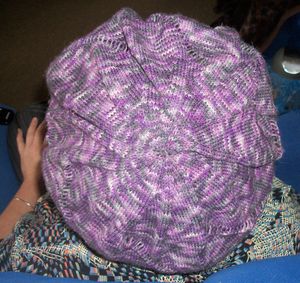 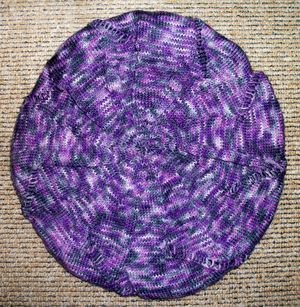 My tea has not been hot. Now I have my lovely new big teapot, I can have two and sometimes three cups of tea from it, but by the second, the tea is cold. I knitted a Tea Mitten, rather than a cosy. I found the pattern on The Ravelry and knitted it today. It took more wool than the pattern said, and I don't know why, so I made i-cord loops instead of a little button placket and one is a different colour. The buttons have some real gold on them (or so it said on the packet) I think I will replace them, but they were the only buttons I had. I also think I cast off the top edge too loosely. Still, it works very well and kept the tea warm for almost a quarter of an hour. 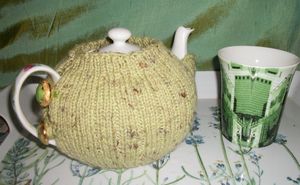 Peri and Gilly have been making long shadows when we walk. The position of the Sun must be slowly changing to Autumn setting.  They are so full of life and excitement that they play rough and rowdy rebel games inside, usually over a piece of plastic cup, and they have to be sent outside to run about. It is much better to run about inside though. 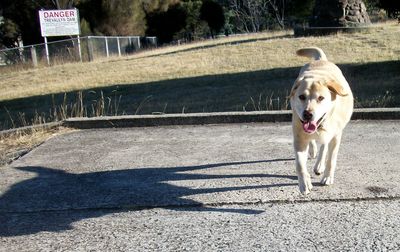 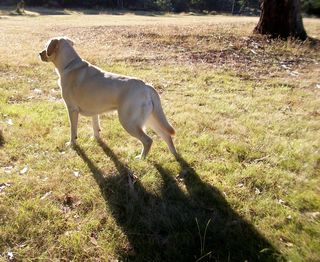 At the moment it is snake time, until late in March, and so Peri and Lorelai Gilmore have to walk on the bush tracks on the lead. They are very good walkers on leads and don't pull or veer wildly. They always walk with Peri on the left and Gilly on the right. I don't know why, but the older/oldest dog always walks on the left, Harki did too. 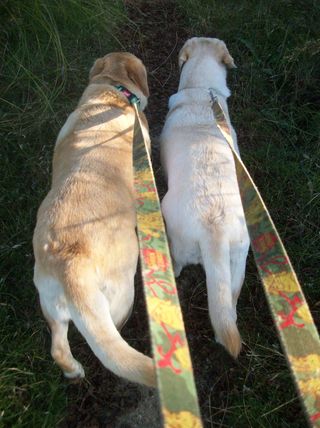 I have been out to a vegetarian cafe. The food, though tasty, was pretty much plonked on the table with no explanation, so I can't really name anything definitively. The platter was quite large and there was a plate with triangles of flat bread, but the service was non-existent. Maybe we were all on the wrong side of whatever the cool and trendy vegetarian cafe age is??? Disappointing really, because I have been before and the service was fine. 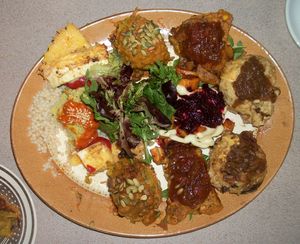 I bought some new cordless phones today. It barely cost more than the replacement batteries needed for the old ones, and I now have three handsets and an answering machine. It seems wrong, but that's the way the world works now. And who am I to question it?

I have actually read a book at long last, a Gallagher Girls book. I accidentally read them in the wrong order: 1, 3 then 2, but Book 4 is on its way from The Library any day now!!!  I ordered six books from overseas. One of the books is a new novel that costs $35 here and I paid $32-09 for all six. And I don't care, really, I couldn't afford to pay $210 for six new books.

I have signed up for Me-Made-March, which is just like Self Stitched September, except with different initials. I must get sewing again now the weather is cooler.

The weather is forecast to be cool for a few days. We are a little oasis of calm here, and have no real bushfire or flood or any other natural disaster threats. So when my mum and I talked on the phone tonight, we worried that because we had none we must be due for some kind of weather event. We are a worry!!!

Posted at 10:23 PM in Books, Knitting:Other things, Me Made March, Television, The Labradors | Permalink | Comments (16)

You are a worry! Especially worrying about Peri's lump, oops I mean shoulder bone! But I know what you mean, I sometimes worry about things that haven't even happened and aren't likely to happen, how silly is that!

I like your tea mitten. But I have to confess, it takes me far longer than 15 minutes just to drink one mug of tea, I'd have to have 20 tea cosies to keep a pot warm for long enough to drink it all!

I get Most Annoyed when it costs more to replace something than fix it (printers come to mind in particular, where the ink costs as much as a new printer, almost!). It's such terrible waste, but sometimes you have no choice.

The beret is gorgeous.
my doctor (many yrs ago) told me if I didnt have anything to worry about..........I would worry about that!!LOL

I worry too, as did my dad! and I worry that my son has inherited that too! I have spent the last two days in a mild state of anxiety. I'm glad I know what a panic attack feels like now because once I ended up in the emergency ward thinking I was having a heart attack (I was worried because my dad died aged 48 from heart attack and I was 40 when this happened!)My friend tim just shakes his head and laughs at me and says "I love you you crazy crazy woman!"
It's funny how some people worry and others don't at all. I had another friend who NEVER ever worried about stuff. It happened or it didn't she dealt with it then didn't think on it again. I couldn't understand that at all.
I like your tea mitten I'll have to find that pattern on ravelry and make one for my teapots, cold tea is not pleasant.

Awe, look at the girls, walking so nicely! My daughter in Sydney says, they are experiencing heat craziness, because it's been too hot to sleep. They went to a pool to cool off, but the water was too warm to be of any help. I could not stand this heat!

We have been lucky the last 2 days with it cooling down but Thursday is supposed to be humid again. Your tea cozy looks very cute and I hope it keeps it warm, nothing worse than cold tea. I know what you mean about the worrier business, I worry about every little thing and knitting does sometime keep it at bay but not always!

its very hard not to be a "worry wart" - I try and tell myself not to whenever I catch myself at it - it consumes such a lot of energy :)
love the beret - very pretty !
great pics of the girls as always - Mrs Valley sends them a smooch
;)

I am really looking forward to MMM! I really enjoyed watching your SSS! You know, my dogs do the same thing when walking. Frank walks on my left, Sammie to my right, and Dean-a to her right. Take me out and they are all in chronological order. You may have something there. I don't know what, exactly, but something!

When you grow up with worriers, it's kind of impossible not to be one. I constantly hear my Mom's words coming out of my mouth.

i love that hat :D the colour is lovely and it looks so warm and cozy :) don't worry too much, no one wants grey hair :p

Cute tea mitten! How does it differ from a cosy?

I'm a worrier, too. I've really tried hard not to but I can't help myself! The vegetarian food looks great.

Hmm, I don't know whether I am a worrier or not. Let's leave it at that. (Very Libran of me)

Love the hat, and the now-usable backyard!

I'm a worrier too Cindy.....it's how I was born. Being a typical A Type personality doesn't help either!

Peri & Gilly look like such good girls on their leads!

my mum has always said to me "you are not happy unless you have something to worry about" and she is so right and sometimes I just feel worried but it takes me a moment to remember what I am worried about!!!! I said to Shayne just the other day "have you noticed the days are getting shorter" I think because it is normally so hot and horrible this time of year we don't notice it in Feb but we really have been lucky with summer this year I think

Ah but see.....you brought yourself out of your worries by the end of the post. At the start it was full of worry this worry that and by the end full of I don't cares.......so maybe you worry less than you thought! ecky-thoooooomp! Poor Tim coped a pounding I think.

I'm a worrier too - also from a long line of worriers! It can be difficult sometimes, but I always think it better that I KNOW I'm a worrier when I worry, than if I just worried.
Very well behaved doggers! Yes, the snakes are out - I almost stood on one yesterday as we walked up our hill. It was an overcast day though and I think he had run out of steam so he didn't even seem to notice me at all!
The beret and tea cosy look great - I love seeing your finished projects! xo