Home Archives Profile Subscribe
The Truth, The Hole Truth And Nothing But The Truth.
Tuesday's Letters Eat 12: 'H' is for Honey and Pear Cake

You have to say the title the way  The Goodies do.

We woke up yesterday to a gumboot on the bed. Which was better than the day before when Gilly unearthed her packet of loose green tea and opened that on the end of the bed. There is, at the moment, a Labrador Puppy Dog Golden Hour left from the Daylight Saving changeover. It is the hour when no-one is awake and outside playing except Lorelai Gilmore. We pay the price.

Last night it rained very hard and Gilly was inside, and so was the gumboot. We were treated to a fun fifteen minutes or so of frantic running in and out and gumboot shaking. Presumably to make sure it was dead. Peri was not amused. 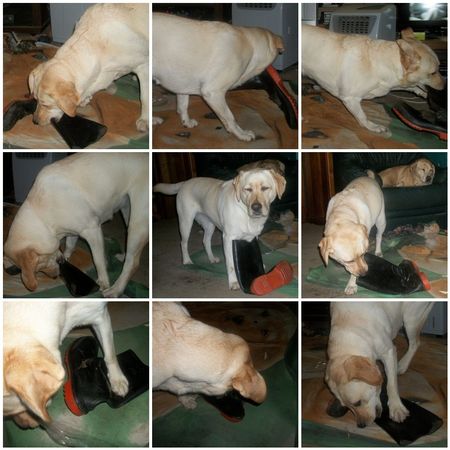 This morning there were no other people at the dam and so Peri and Gilly could run about and play. And play they did!!

Peri was Queen of the World. 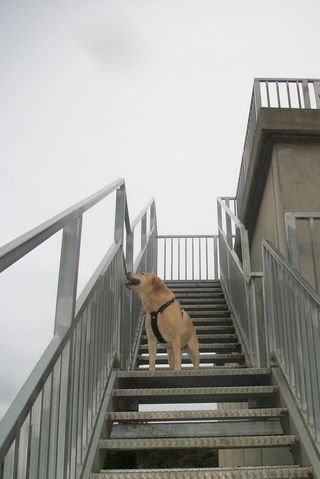 And there appear to be teepees, or bonfires pyramids, or some other weird kind of structures built. There are six of them. They are good Labrador cubbies. 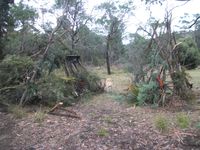 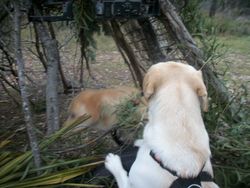 The Valley Girl Hat is complete. I had to do tricksy thinks with the decreasing as I had extra stitches but the star pattern still worked. I need a larger circle for proper blocking. It was a nice quick knit and filled in the gap between cardigans.

Today I chose the buttons for my Freshly Cut Grass cardigan. Although the ones on the left look fine, they were milky and slightly metallic. I didn't like the feel of the one on the right, so I chose the one in the centre. The different colours in the button change when it moves and so it picks up the colour of the wool.

I think this button was very upset it wasn't chosen. 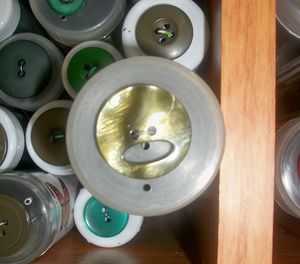 My Treasure Isle lace is going very nicely thank you. I love that you can 'read' the lace and know what to do twenty-five times across the row by looking at the rows below. You can read about Ann's pattern on her blog if you don't have The Ravelry. There is a link if you do. I am thinking I'd like to make my shawl(ette) narrower than the pattern and so I might make the centre of the short rows used for shaping longer. I am not sure if this is going to work, but I don't mind experimenting after the lace. There was a small over-tightening incident with one wooden needle end and so now I have some metal ones. 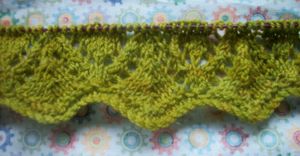 Mrs HouseOf sent me a knitting gift. It is gorgeous!! It will fill another little between cardigans gap. 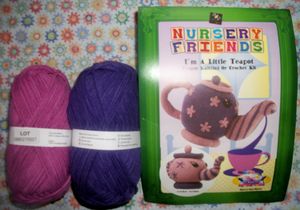 On Monday night I always talk to my mum on the phone for a couple of hours or so. I don't think I will knit Treasure Isle, I will do some embroidery instead. Less danger of a mistake!! I must be feeling slightly better, and those sinus tablets are working as they build up in my system, because I feel like doing things!!! Even the driving rain and gale force winds don't seem to matter!!!

The previous post about the hole in the pocket, still damp, was very amusing too :)

Very pretty buttons, I love ones where the colours change about a bit.

I love the look on poor Peri's face, and I agree totally with your choice of buttons, perfect!

The buttons you chose look wonderful.

Yay for feeling better and energy! How nice a feeling that is.

Your knitting present made me think of your present from MrsDrWho of the knitting farm animals, I vote one of those for the next small fill in project!

heh heh, poor little button indeed! I hope you bought a couple to put them out of their misery!

ecky thump! (that's the only Goodies saying I can think of right now...) (I hope it is a Goodies one, heh!)

I'm glad Gilly well and truly killed that gumboot, I would hate to read of "woman (or dog) attacked by gumboot in the middle of the night" in the paper!

love those gumboot antics and the hat looks very 'spesh' ;)

Aaaaah Ecky thump! We do loves The Goodies, we do.

Miss Petal says to tell Gilly that after she's killed the gumboot, she can try killing the couch cushions ... or at least digging for bones underneath them.

Very good button choice, and that lace is looking wonderful!

As soon as I saw the title in my bloglist, there were Goodies exploding in my head. Ecky thooomp, indeed.

Happy to hear that your tablets are making you feel better. I love the teapot kit you received, how nice. Your lace looks gorgeous and I like the buttons you chose too!

Glad you are feeling a bit better. I had to smile when I heard Gilly lef a gum boot on your bed. Tamyra is always leaving us toys on the bed for us to find when we wake up. All three of those buttons looked lovely and the one you chose is super.

Are those knitted tea pots? How fun!

I love the hat (of course I do, it's purple!) and the start of the small shawl (mini-shawl?).

well if you let one gumboot live, the next thing you know you will be overrun with gumboots and then the rowdy cowboy boots show up and 16 hole docs. its just not worth the trouble letting the gumboot live, might end up with a lot of stinky boots moving in :p

Your green lace is so pretty! Can't wait to see how it progresses, and your new cardigan too.

I'd love to know more about your sinus tablets. It's been damp and rainy here, and my usual medications don't seem to help beyond keeping headaches away. I envy your energy! :)

The Valley Girl Hat looks great. I always use a dinner plate to block my hat/beret. I like the name you have given to the shawl & you can make the shawl narrower. I will email you the details.

i was going to vote for the one in the middle, so its good you chose that one! i cant believe you finished that hat so quickly. im thinking of starting a hat...off to look at that pattern.

The button you chose looks lovely! The shawl sounds so lovely, I'm sure it's going to be a real treasure when you finish it, I really do admire your patience in being able to knit a whole lacy shawl.

That is so funny about the gumboot! Is she worried it will go walking about on its own and startle her sometime?! I love the rowdy play--so much like S&S! The unhappy/not picked button is too funny, I've never seen one like that before.

Isn't there still the threat of the other gumboot? :-)

I love your choice of buttons and that sad button made me laugh.

Your choice of buttons looks very fine...can't wait to see the finished product.

Lucky that gumboot was a dead one & not a live one!! LOL

So funny to see the girls playing together :)

oh the teapot and cups pattern!! how cute is that can't wait to see those knitted up. I was sorry to read of the dead gumboot and the green tea incident while it must of been very messy and annoying it did make me giggle just a little mind you, as I was then thinking of poor you cleaning it up! THANK YOU for telling me Paper Giants is tomorrow I would of just merrily been waiting for it next Sunday!! thank you sooooo much. I love it when part 2 is on Monday and you don't have to wait

I just have to say I love your knitting. The sad button is cute and the Valley girl hat is sure to be appreciated in your cooler climate. The treasure shawl is looking beautiful in that green I'm sure at this point it is much closer to done :-)