Home Archives Profile Subscribe
Only disConnect
The Truth, The Hole Truth And Nothing But The Truth.

I have just finished eating a bowl of this tasty garlicky potato dish, layered with milk and cream. It is so moreish I actually had a little more. On its own. There seems to be a good deal of debate about what a gratin actually entails, but once again I consulted Stephanie's striped tome and Delia agrees with her too. Jamie embellished his with herbs and cheese and bacon, but in the end it is the simplicity of just a few ingredients that makes this so delicious.

Waxy potatoes are vital and must be sought out. There is a list here as a guide for waxy potatoes.

Gratin Dauphinois   serves 8 as a side

Slice the potatoes thinly, not too thinly, and put them into a bowl of cold water. I put my colander in and then the sliced potatoes so they would be easy to drain. You can see in the picture that the soaking helps draw out the excess starch. 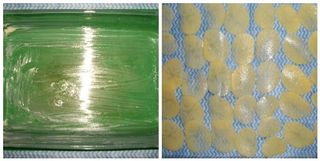 Grease a rectangular dish with 20g of the butter. The one I used has a 2.5 litre capacity. Drain the sliced potatoes and then lay them out on kitchen towel, or new cloths, to dry a little. By the time the last ones are done, the first will be dry enough.

Arrange the potato slices so they slightly overlap and cover the base of the dish. Season with salt and pepper and garlic. Repeat. I made four layers. 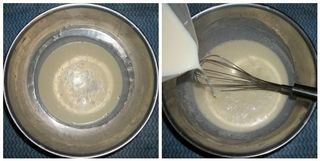 Sprinkle the plain flour over the cream and whisk. Then gradually whisk in the boiling milk. Carefully. Trying not to disturb the layers, gently pour the milk and cream mixture over the potatoes, and then dot with the rest of the butter. 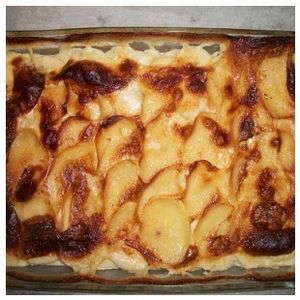 Bake in the oven on the top shelf for an hour. Mine took about 15 minutes longer. If it is browning too much, cover with foil, or move to a lower shelf. Rest for a few minutes before serving. 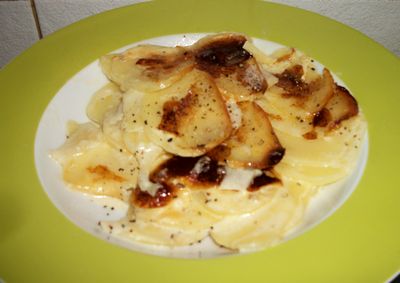 I think this is best eaten straight away, and while I would not mind eating it later on, others may not!! I just ground some pepper on top. Others add some cheese in the layers and on top. Any root vegetable, or combination, could be substituted.

This sounds yummier than my version!!

I want to eat this NOW :) Luckily you are miles away...

I love this dish, next time, I'll be using your recipe. Yummm, thank you !!

Oh we love those but we call them scalloped potatoes. Isabelle could eat a whole potful if I let her. We tend to do the cheat's way by buying scallop potato mix that I think McCormick's make in a little sachet which we add to the milk and cream. Your look and sound very tasty too.

Oh, you had me at garlic and potatoes! YUM! I love this!

Yummy. I must make some as everyone in the family loves potatoes.

Oh nom nom nom. I'm making that with the last of my potatoes. I've just finished my champ. It was lovely too. :)

Yum! I wish I was on your dinner party list!

One of my favorite things! And I agree, it's good cold later on too. One similar thing I like to do is to layer potato, cabbage and cauliflower with a little cheddar and butter and pour over the hot milk and bake.

oooh yeah. bring on the colder weather for more potato based comfort food. what a great recipe!

Wow - this dish looks fabulous! I have been thinking about a potato dish just like this. Thanks for the prompting. the weather is turning enough now that a gorgeous warm meal like this would fit right in.