Carrots were on sale at the local Vegie Shed so I bought two kilos and they were sitting just inside the back door. I noticed Lorelai Gilmore was in an unusual part of the garden where there are lots of thin prickly trees. She was there for a while and when I called her out she was wearing naughty ears. Later on that evening when I went to make their dinner I realised why. 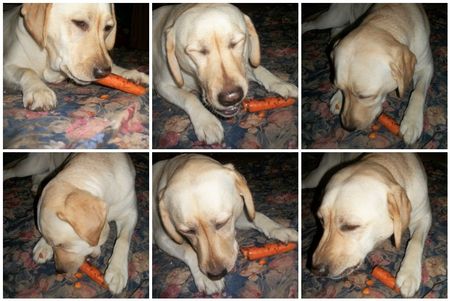 Gilly had been stealing the carrots, one by one, and either eating them or burying them in the garden. I think she may have taken ten carrots.  Carrots obviously taste of Utter Bliss!!! She's a funny girl.

Peri is a changeable girl: every now and then she decides to sit on the other side of the back seat of the car. She loves sticking her head out of the left hand window, and I never open the one behind me, so she's missing out on wind in her hair.  She's been in the creek and she's dripping wet. I love her soulful gaze!! When we walk The Labradors often slip under the wire fence and go the long way round. I think they do it just so they can screech round the corner and run full pelt!! 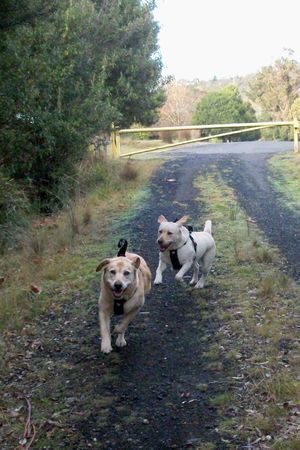 I did make some little jam tarts for morning tea with my quick jam. They were cheating tarts because I used frozen puff pastry. I just docked the pastry all over with a fork and pressed each circle of pastry I cut into the tray. I am not sure what it is called but it has shallow semi-spherical 'holes'.  I put in a teaspoon of jam and baked them for 15-ish minutes on 220*C. They were very delicious but they need a little time for the jam to cool down before lifting them out of the tray. I think I took the picture with the 'Sport' setting, it's a tad blurry. 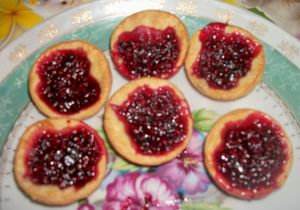 I have been knitting furiously on my new cardigan. I've knitted 100 rows, or 30cm of garter rib and now I am back to just normal K2 P2 rib. I prefer that, I was always ribbing when I should have been just doing a plain knit row. Here's the back thus far. 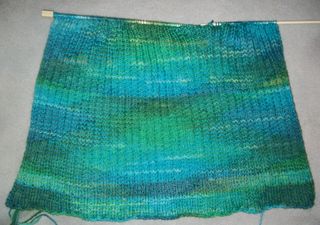 There has been a lot of talk recently about buying generic brand grocery items. I don't. I know it costs more, but I prefer to buy local products and those that are sourced from The Mainland. I am afraid of eating food where it just says 'imported ingredients'  because I don't know where it is from or how careful they are.  I know China sends some vegetables to NZ and they package them and send them on to us. I feed The Labrador people-quality kangaroo because I can't be sure exactly what is in the pet kangaroo mince. I think it is a false economy to buy supermarkets' home brands all the time because the money goes off shore and I want to support local producers.

There, that's my two cents' worth.

The weather has taken a warmer turn, and we're expecting 18 or 19*C tomorrow. I had to turn on the aircon in the car and take off my cardigan.  I finished watching The Adventure of English DVD this afternoon and it was due back, which was why I went to The Library, but I forgot my card. I'll go again tomorrow to pick up the Edge of Darkness DVDs. I've managed to miss it twice on the ABC in the last few months.

I'm going to visit The GardyGardeners tomorrow afternoon so I'm taking some special Chocolate Biscuits, pork and apple sausage rolls and some treats for Ben the Corgi!! I'll need to start cooking as soon as we get home from our walk tomorrow.

Love the tarts. Just gorgeous. We all use frozen puff pastry don't we? Shortcrust I make from scratch, but puff, no way!

I'm with you on the generic foods thing. There are some items I'll buy in generic brands, but if it's edible, no. That said, I sometimes feed my chickens generic shredded cheese because THEY LOVE IT!

The Westies love carrots - we call them orange bones. The carrots are as good as bones for cleaning teeth and cause MUCH less damage than bones.

I love that your girls are so healthy! You can't really go mad on a dog for eating lots of carrots, hey? Biscuits, yes, carrots, no!

I don't buy a lot of generic brands, they usually don't taste as good or work as well, in my experience. And that's false economy, isn't it.

The girls are smart to get more running in, every way they can! I'm sure Peri is smelling something very interesting. Gilly really seems to like carrots.
The back of your cardi makes an intersting pooling pattern! I still like it. :o)
Wouldn't one of your tarts be nice to go with my tea right now!
After nothing but rain, it's humid today, what a weather we are having this Spring!!!

My dogs like carrots, but not enough to be naughty and steal them. I wonder if they just make good chew toys for a labrador to gnaw on. . . that might explain the attraction. My yellow lab seems to like almond macaroons and fried chicken the most.

You have the bestest dogs ever.

Aww I love them :) and the fact that Gilly eats carrots. What a cute face on Peri!

Sirius has naughty legs. When she knows she has been naughty, her legs buckle and she is six inches shorter. But then she won't really eat vegies so I don't think Gilly is very naughty really!

Edge of Darkness - the extras are just as good as the actual program. Still love it to bits even after all this time!

I love the pic of both of them running!!!!

Momo loves carrots too. Sometimes when I'm chopping carrots in the kitchen, surely a piece will fall to the floor but it will disappear within seconds!! :P

Love the photo where the doggies are running. They looked so happy!!!!

Daisy won't eat carrots unless they're in a stir fry or stew, but give her red capsicum & she goes berserk. LOL

The criss cross pooling is looking lovely. Your needles must be flying!

Serendipity - I gave Zara the end of a carrot the other day, and she loved it!

BTW the back of your cardigan is the most beautiful tartan, isn't it? You couldn't have planned it better if you tried!

And this weekend's warmer weather will see me washing the unappreciative dogs and all their accoutrements. Their cuddles will be much nicer.

sky just plays with carrots, tosses them up in the air and then wonders were they went :p

i would love to buy more local produce, but it can be hard to find here and the price can be a big problem for us :/ we did go to the farmers market last weekend and bought a bunny as john had never had rabbit before. so locally caught and its a local company that sells them. not much £, but its what we could afford :)

How come I never had dogs that eat veggies?! It's good to see such happy healthy girls.

Here we dream of a winter's day when it gets down to a freezing 18 or 19 degrees. We all wear our scarves and coats for a day or two and then it goes back to 22 or 23. How I would love a proper winter...at least I think I would :-)

That's a funny story of carrot stealing Gilly. I love carrots too. The tarts look yummy & i use frozen puff pastry to make match sticks which my girls love.

Do you have a cover to protect the car seat? I need one (beige seats, brown dog - oh no!), but I haven't been able to find a brand that seems sturdy and user-friendly (so humans can still travel).

Hehe, carrot stealing. Our family rottie would steal apples from the fruit basket :)

Silly doggies! Like the cat I knew who went nuts for raw broccoli. Weird!

That looks like *a lot* of knitting. Brava to you for doing a full-sized cardi in 2/2 rib!

Happiness is a crunchy carrot. :-)