My computer has been back for a little while, but I had a little accident. I knew I shouldn't be left in charge of deleting programmes I no longer wanted using the Add/Remove feature. I accidentally removed the programme that plays videos. Damn and blast. I downloaded it again.

After that I stopped deleting.

My computer is old (Father William), it is almost eight years old and in computer years I think that is 147. I had no idea it was so old, I thought three or four years, but I checked the first emails I sent from my computer and it was the beginning of September 2003. I shall be needing a new one at Tax Return time. Mine has no proper room for any more memory and it is just getting a bit creaky. I did have a short dalliance with the idea of a laptop but MrsDrWho said a few well chosen words: bouncy Labradors and cups of tea. I decided that wasn't the way to go.

I was lucky enough to be The ComputerFixer's Mum's Knitting Friend and so I know my computer was well looked after. It has extra protection now, but I think there is little thwarting of the horrid viruses and Trojans to be achieved in the long run. One just has to live with the possibility.

I didn't actually do much while I was not online. At first I had horrid feelings of withdrawal, and then I entered the Pit of Despair and thought that I might just have to manage without a computer forever. I tend to catastrophise things. I had a tiny little Georgette Heyer Decline. MrsDrWho let me check my comments on her computer and so I had lots of commentorial support throughout my computer troubles!!! It hepled to know other people had experienced the same problems.

The Labradors have been very busy and happy. They love the cold weather. Peri rolled in something so smelly that she had to have a swim. Lorelai Gilmore tried to help by licking Peri clean. Yuck!! 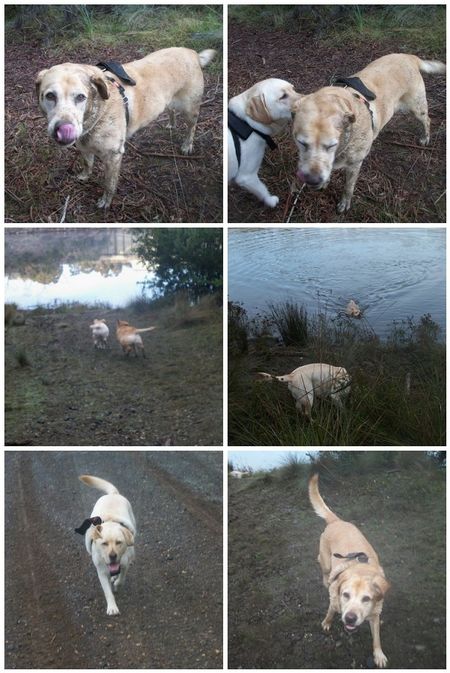 They also made cards: 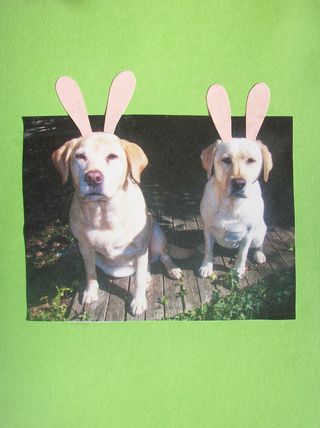 He works all night, he works all day,
To make the eggs for Easter Day.
Ain’t it sad?
And still there never seems to be
An egg for Peri or Gilly.
That’s too bad.
In their dreams, they have a plan:
If they get that Bunny, man!!!
He wouldn’t have a chance at all,
They’d chase him like a tennis ball.

There was some crafting. I made some milk chocolate Easter aprons with embroider on the front, and some little coasters, and some chicks. 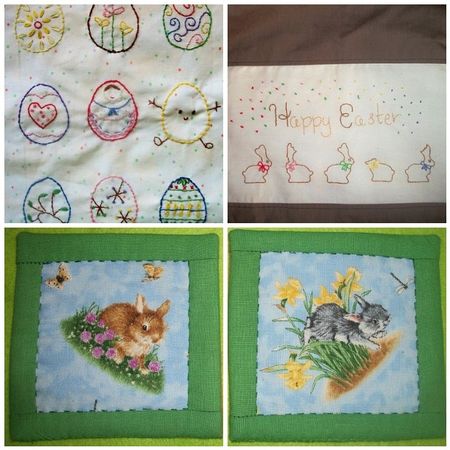 There has been some knitting, and some unravelling. I started the Greenfield cardigan but I just didn't love it. My row gauge was so far out I was having to do calculations all the time and the garter stitch was not a flattering look. I had knitted 200g of wool, but I just undid it all. 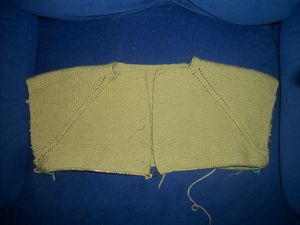 Consequently I am cardigan knitting-less. I am in possession of twenty balls of the green variegated Cleckheaton Basics. I thought I had ten balls, but they must have multiplied. I want to make a nice longish 8ply cardigan, ribbed or with some shaping and a v or scoop neck, but I don't seem to be having any luck finding a pattern. I am too lazy to make one up. Any suggestions?? 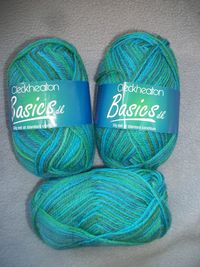 I have knitted a pair of green socks for walking The Labradors, they are green, a misty green 8ply. There's a dishcloth with a paw print for the GardyGradeners because they were intrigued by knitted dishcloths, and a hat for Toddler Electric. You use the 'rosebuds' and leaves to make a wreath above the rolled brim. I saw Prudence Mapstone's lacy scarf at the Craft Fair but by 1pm on the first day they had sold out of the colour I wanted, greens of course, so I am kitting a skinny scarf with some anonymous very fine mohair. It's just four rows: K, P, K2tog yfwd, and then P. On Friday I cast on some new gloves in some 4ply sock wool. I wanted a finer pair with a longer wrist section for when the days are a bit chilly. I'm experimenting with a tapered finger decrease over six or seven rows. I don't think the K2tog-across-all-needles-and-pull-a-thread-through-to-gather decrease looks nice or fits well. My Dog Walking mittens have a hole in the cuff so I have to fish out the rest of the Zara and knit a new cuff. I might make the cuffs a little longer. 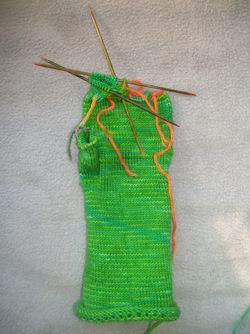 Then there was the incident of The Lorry in the Afternoon. A lorry was trying to turn down the road and there was a slight miscalculation and they were wedged across the road. They tried to reverse: no good. They tried unpacking the contents and then reversing: still no good. In the end they had to bring a hydraulic lifter thing. It was a talking point in the neighbourhood for a few days. If it was not for the metal barrier, it would have careered right over the drop and into someone's house.

Doctor Who is back and I am really enjoying the new series. Some people have complained it is too dark, but it has always had darker elements. Mary Whitehouse  and even the Head of the BBC complained about the horror and violence back in the 1980s. The more things change the more they stay the same.

I have no idea what Letter for Cooking will be happening tomorrow. The food part of the blog has gone to hell in a hand basket this year. So, I'm going to watch The Adventure of English which I borrowed from the Library, and knit my gloves this afternoon instead.

Oh so pleased to have you back!

You have been busy, not only with doggie entertainment, but roadside excitement as well. Never a dull moment, eh?

The Cleckheaton Basics looks a gorgeous colour. Do hope an exciting pattern jumps out at your soon. :)

You've made so many fun things, I don't know which project I like the most.

lovely to have you back on air - have missed the blogs immensely - those 'girls' with the Easter ears look like they've been having a hopping good time, computer or not...am amazed at all your wonderful craft and knitting :)
ps check your letterbox - some treats for the 'girls' in there xx

I'm so glad you are back! I've missed you!

Glad it's the computer that's been out action as I worry about you if I can't read your blogs!!!

The Easter cards and the Easter song are gorgeous! They made me laugh. Glad your computer's back up and running ~ viruses are very unsettling. I've had to wipe my hard drive three times now and I'm sure, before too long, I'll have to wipe it again.
By the way, I wanted to say thank you for writing about The Owl Service (a while back now). I'd completely forgotten about Alan Garner's books but I read the series as a teen and loved them! I'll have to hunt them out and reread them.
Please pat the labradors for me. =)

Hooray, you're back! And haven't you been busy? Isn't it amazing how much you can get done when you're not sitting in front of the computer?

I think Peri is trying to tell you that she wants to start wearing perfume. A light floral I think.

Welcome back! Such cute Easter crafts.

i have missed your regular posting! it seems like youve been rather busy, all that gorgeous easter crafting, especially the addition of ears to the girls! i wasnt sure about greenfield in the garter stitch either but in black, and tight gauge, its looking pretty good. you will have to think of something else, one cant not be cardigan knitting! the mitts are gorgeous though.

I so missed reading your blog Cindy...it's good to have you back.

You certainly haven't wasted your time while you were away. Love love love the embroidered apron!! So cute. All that knitting as well. I'm sure once the GardyGardners start using their dish cloth, they'll be back for more :D

Here's hoping your computer stays healthy for a while longer :)

Wonderful to have you back online! Have been missing your lovely posts

Wow, you have been busy! Amazing what one can achieve when computerless isn't it! (Good to have you back though)

your back! yay! :D
I haven't watched dr.who yet, keep meaning to but having a hard time finding the time to sit down for 2 hours
i love that easter song :D i have abba stuck in my head now :/

It's great that you have your computer back. I love your Easter apron. You may want to consider Every Last Yard as I have seen a couple of them & it looks great. It's next on my list.

Glad you are back with a computer in good working order. It looks like you put the computer free time to good use! How much crafting did you fit in!!!!
Have been hearing about the Ribby Cardi on Rav, but it looks like it needs a aran or worsted rather than an 8ply. A number have people have knit it in DK though, by knitting a size up from their usual size to allow for the smaller gauge. The ribbing on the side gives it good shaping :-)

Hello hello and welcome back to computer land! What a lot of adventures you've had whilst away!
Sorry about the Greenfield cardigan. I wonder if you would like the Jo Sharp Shawl Collared cardigan (I have one in my projects on the Ravelry, near the bottom of my project page). It's in 8ply, has shaping, and has a ribbed collar. It doesn't have any buttons, but you could easily add buttonholes in the ribbed collar (which is knit separately and seamed on - it wasn't as tedious as I thought it was going to be!).

You went all out for your Easter sewing!! Lovely!

I have a laptop and I do love it, but I have to admit that it encourages you to spend even more time online! And I have a wonky Esc key because Frank really thought I should be patting him instead of typing with my left hand!

I've MISSED you!! Love the bunny card and those chicks are the best!

Found another pattern you might like: pattern search on Rav for "Deco" by Kate Davies. It's pretty :-)

how can people possibly say Doc WHo is too dark the story is BRILLIANT sooooo much to it, so much to remember about what has come before, it just gets better an better!!! Lorelai looks like she is telling Peri a secret and Peri feels horrified about what she is saying!!