Tuesday's Letters Eat 14: 'I' is for Irish Stew

There are not many recipes that start with "I", but noticing turnips in the veggie shed, I decided on Irish Stew. This is based on Stephanie Alexander's recipe, but with a few additions. It is a very easy stew to make. We didn't ever brown the tops of the potatoes and we always had carrots, swede and parsnip, never turnip. The turnip I used is quite mild and not a vegetable to be afraid of. I think mum may even have added a splash or Worcestershire Sauce.

The very best part of eating Irish Stew when I was at home, was the end of the meal, when everyone had a nice thick slice of crusty white bread and we laid in on our plates and sopped up all the juices. Then you cut it up into little squares with your knife and fork and savoured each delicious square. I plan on doing that tomorrow!!

My little casserole is only 2 litres ( 3-ish pints) so I just made half the recipe. At home we always used forequarter chops. I think they were cheap!! It is important to use lamb with bones. Two Tooth is suggested but it's hard to find old lamb or young mutton.

Season the lamb well, on both sides, with salt and pepper. Melt the butter and oil over a medium high heat and then brown the lamb on both sides. Place on a plate. Turn the temperature down to low, add the sliced onions and fry till golden brown and soft. Pour off any excess fat if you are using the same casserole. If you are going to transfer the meat and vegetables to a casserole dish, heat the stock to boiling now. 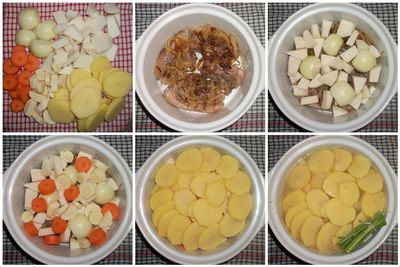 Layer the ingredients into the cooking pot: meat and sliced onions, the chunky vegetables and halved onions, and then layer the potatoes over the top.

Add the boiling stock ( or bring the casserole to the boil on the stove top) adding the parsley stalks and thyme (mine is dried flakes) so that it comes just to the level of the potatoes. Bake or simmer on the stove for 90 minutes or until the meat and vegetables are tender when prodded with a skewer. If they are not ready, cook for another 15 minutes and tests again.

You can now rest the stew out of the oven and skim off any fat, but the lamb was not very fatty, and we never did this at home.

Return to the oven or place under the grill for 10-15 minutes if you prefer the potatoes to be browned on top.

Spoon meat and vegetables into a bowl, sprinkle with parsley and at the end, sop up the delcious juices with some bread. This reheats extremely well the next day, but doesn't freeze very well at all. A bit of preparation but then dinner is all done bar the cooking. I like dishes like that. It's turned very chilly tonight in Sydney and this would have been good. However I had curried chicken made from leftover Mother's Day BBQ chicken and that was good too. Must buy some parsnips. I love them however cooked and Jackie French has a recipe for parsnip bread which is good. Yum, winter food.

This sounds mouth watering good! I love lamb, but rarely make it, because my son does not eat lamb, and I don't like to cook for myself, and cook something else for him. I also love one pot meals. Mmmmm.

If I don't have 2 small Swedes, can I substitute Norwegians in a pinch?

i am not usually a fan of the 'ips' but there is nothing quite like the slow cook stew for winter comfort is there? i like the way this one is all layered!

I do love a stew or casserole in winter. Yum yum yum.

That looks so nice. I wish I could drag myself off the computer and cook something like that. I also remember the bread and butter thingie you mentioned.

It looks like a wonderful tummy (and heart) warming meal :) I can't stomach much food at the moment, but looking at that makes me wish I could!