We used to call them Kumara but now they seem to be called Sweet Potatoes. I am just happy to have something beginning with 'K' to cook. Kumara is very trendy now, it is in the frozen chips and wedges section in the supermarket and its merits are extolled in ads on TV.  I usually have some garlic and chilli or cayenne or paprika and olive oil. That's all you need. I have gussied mine up a little with some lemon zest and sour cream, but still, one kilo of wedges for $4, compared to almost $9 in the supermarket is good value. I bought Australian Kumara which was cheaper than that which came from I know not where.

This recipe is also speedy. In the 10 or so minutes it took to heat up the oven, I prepared the wedges. They take 15-20 minutes to cook. I scrubbed one and peeled the other. I think I quite like leaving the skin on. The smaller the wedges, the quicker they cook. And they are delicious. Recipes advocate serving them with Tzaziki, but I quite like the plain sour cream with a little spring onion for garnish. Maybe some sweet chilli sauce??

The pictures just show half of the Kumara.

Preheat the oven to 200*C and line a heavy oven tray or dish.

Prepare the mixture to coat the wedges: mix the oil and grated or chopped garlic in a bowl. Add as much spiciness as you desire. I added 1 tspn dried chilli flakes for 1 kg of wedges. Maybe some lemon zest too, then mix well. Cut the Kumara into wedges. Bear in mind that larger wedges take longer to cook, while smaller wedges are likely to be crispier. The four Kumara were roughly the same size and yielded 8 wedges each. Coat the wedges in the oil mixture. 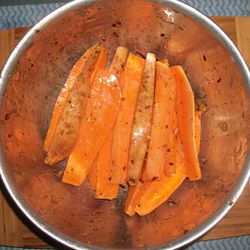 Place on the tray in a single layer, pouring any of the remaining mixture over them. Bake in the centre of the oven for 15-20 minutes. 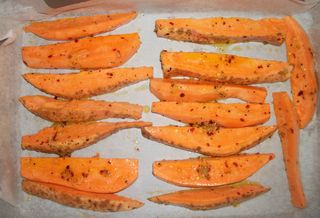 Check after 15 minutes, they may need turning. They are cooked if a skewer goes easily through the wedge. 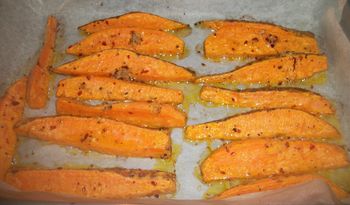 Serve immediately with some sour cream for a snack, or as an accompaniment to a meal. 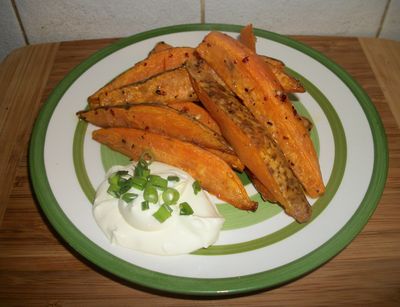 I love potato of all kinds...sweet and otherwise. They look delicious!

oh delicious! I've been a fan for years of eating it in all manner of ways but this way isn't one I've done. Won't be long and I'll be giving it a go!

Oh yum! I have a plethora of sweet potato at the moment, so will have to try this! If you leave the skin on, do you eat the skin? (probably a stupid question!)

These look so delicious and as I was able to get a nice bag of inexpensive sweet potatoes at the weekend, a lemon in the fruit bowl and have a tub of sour cream to use up, I will be able to use your recipe and make some for dinner tomorrow night! Thank you !! :)

Oooh I LOVE sweet potato! I shall send this on to head chef (Mr Bon) for consideration :)

oh yum we go through a lot of Kumara in this house and these sound like just the ticket!!!!

Having at one point in my life lived in NZ for 15 years, know all about the Kumara and have enjoyed Kumara wedges with sour cream and chilli for years, but will certainly be adding the garlic and lemon zest next time. Yum :)

In our kitchen roast dinners usually include the humble Kumara roasted alongside the pumpkin and taties.

I love sweet potato.....but as I'm allergic to chilli, I think I'd have to give the paprika &/or cayenne pepper a go!

Mmmmmmmm. Your's look as if they would be way tastier than the ones from the supermarket. A great recipe for Winter. Thank you!!

I have tried the frozen kind, but I bet yours taste so much better!

Hi CIndy. Typepad wouldn't let me comment last night so am trying again. That looks very yummy and kumara is currently about the only vegetable not in my fridge. However, I can remedy that.

Son uses kumara mashed by itself or occasionally with potato as a topping for the old fashioned cottage or she[herds pie, depending on the meat used.

hi Cindy!
Long time no see for me, finally reconnected bloglines! Hope to catch up on all I've missed (2.5 years....)
Love Rachael (allittook)

That's it. I'm moving to Australia. You've taunted me enough with your tasty wares.

Snap! I bought sweet potatoes tonight to make some of of these! They are delicious.

They look really yummy & so easy to make. I love sweet potatoes & just had some in my vegetable curry.