It almost seems too MasterCheffy or Jamie Olivery, but since Stephanie Alexander does it, so can I. En Papillote means 'in parchment' and food cooked this way is placed in a parcel or pouch and then baked.

The recipe calls for a mixture of mushrooms, but the Shitakes looked a bit iffy and because I can, I won't buy already sliced mushrooms, even if they are Portobello: I think it quadruples the price and I don't know who has touched them. Surprisingly, there was no fresh tarragon in the shops, so I used the dried herb instead.

I used baking paper to parcel up the mushrooms, I cut a circle as the recipe said, but in fact it was easier to crimp and wrap if the paper was square. I couldn't fit half the mushroom mixture into the square or the circle, so I made 4 parcels. 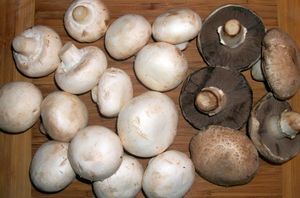 Wipe the mushrooms with a cloth if needed, the break off and slice the stems. Chop the caps into halves or quarters, or leave them whole depending on their size. 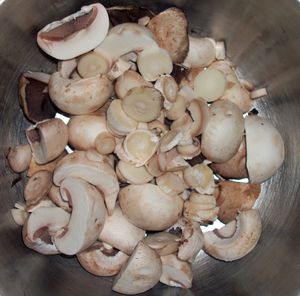 Combine the mushrooms with the oil, cream, herbs, garlic, salt and pepper.

Cut circeles or squares of baking paper, and brush with the melted butter. 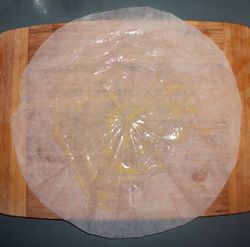 Place 1/4 to 1/2 of the mushroom mixture into the centre and then bring the edges together and crimp and fold the edges, twisting the ends tightly. I was worried I hadn't closed the parcels tightly enough, but the process seems to be quite forgiving. 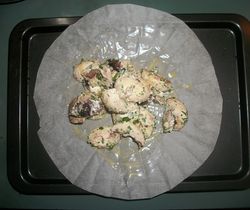 Place on a tray and bake for 20 minutes.

The paper will puff up with steam but I was happily surprised to see that my inexpert crimping and twisting held fast till the end. Be careful opening the parcels as steam will probably whoosh out. 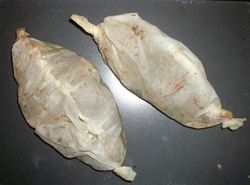 I think this would be a delighful entree or brunch snack. I served mine immediately with freshly buttered sourdough toast. Oooh very mastercheffy indeed! All posh! I am not a mushroom fan, well, not as the main flavour, so I won't be adding this to the list, but I am totally impressed you cooked something in paper! Very cool!

(by the way, I made your honey and pear cake today, it was fabulous, thank you!)

Mmmm. Creme fraiche, parsley... I think I have all the ingredients for that. Sounds good. Don't have sourdough at the moment but I do have homemade bread with multigrains and chia seeds. And Australian organic butter which tastes ever so much better than ordinary butter.

My mouth watered just reading this. I'm definitely going to give this a try! Thanks!

I made this tonight in a small quantity as part of my dinner. I already had oven on so made use of the electricity. jUst as I put the mix in the oven I remembered the garlic. I left it out.

It was very good and went well with the tangy sausages I had. I think it would also be nice with a bit of chopped onion in it, already fried or perhaps some bacon pieces and onion fried and used with it. Not much as the dish is already good, but perhaps a change.

i am not a mushroom fan either but this looks very tempting! i do hate the way things pop up on masterchef (as cool as they are) and people act like they just invented them, when theyve been around forever. but i guess its introducting people to food and techniques theyve never tried, so thats a good thing!

I'm not a big fan of mushrooms unless they are part of other ingredients in a dish. But guess who does love mushrooms....my little Daisy!!

Impressive! I never thought of the "you don't know who has touched them" thing. I guess I figured a machine does the cutting. Yes. A precise, clean machine. (That's my story and I'm sticking to it.)

I love mushrooms. We enjoy them almost every night. This looks absolutely delicious - thank you for sharing.

I'm drooling as we speak. Doesn't make for a happy keyboard!