Home Archives Profile Subscribe
I Get To Buy With A Little Help From My Friends
Tuesday"s Letters Eat 30: 'R' is Rosemary Potato Pizza

Or maybe Dress Gang??  Or Lorna Doona?? I never watch Meet the Press because I am an Insiders fan.  Not many people saw Press Gang, which was such a great show. I do like Lorna Doone, in book form or on TV. Anyway, meet The Dress and The Dress Gang. This is my toile for the Rooibos dress from Colette pattern, made from a doona cover. 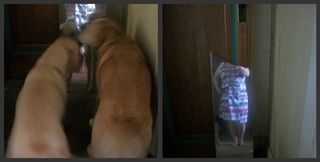 It took about twenty photos before the novelty wore off and The Labradors (Dress Gang) went away. Yes, that is me, a very small picture of me, and I am conveniently headless where the mirror broke. I don't think I will have seven years' bad luck and I do like the way it crops out my head automatically.

I did a FBA and then added two inches of width to the front and back midriff bands, but it was too much. Apparently my upper midriff is the right size!! I will have to move the extra dart created by the FBA up a little, and also add some length directly under the three lower bust darts, but otherwise it is my most successful FBA ever. The back bodice darts are way too pointy and puff out, so I shall lengthen and narrow them. The shoulders need to be raised and I lowered the neckline and maintained the square shape without the little twiddly turnover pieces. And I am surprised to see that my legs don't look all that fat!!! Considering I am wearing a terribly unmatched and non-drapy dress, it is not too bad at all. I just have to redraft the front bodice and sew it to the skirt again and then I think I will be ready to make the Real Dress. There is a Sew Along, but I am just catching up. I find dressmaking very, very tiring. The Colette patterns are made for women who are curvy, and I am encouraged to sew another pattern, now that I know they really do have a curvier fit.

The wild weather has gone, the flood peak in town has passed and the Sun is shining, so Peri and Gilly and I spent some time in the garden. I had cups of tea and just watched them going about their business. I don't know what Peri saw when she was looking with Gilly,

but she decided it was a Hackles Up situation. 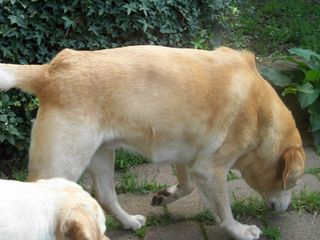 And then there was the job of trimming the tasty grass. 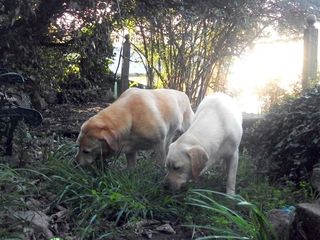 And there was also quite a lot of this: 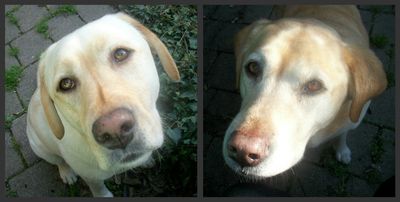 Maybe there would be a treat?? They were, sadly, disappointed. Hence the grass being trimmed!!!

I haven't knitted another stitch of the socks I have not named yet. It has taken all my effort to cut out and then sew The Dress, but I am baking an Upside Down Apple Cake, maybe with some extra caramel sauce. And some bought custard!! 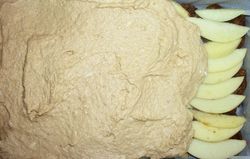 Yesterday MrsDrWho and I had brunch in town and then shopped. We also read poems for the masses in a book shop because it was, apparently, Local Book Shop Day. I purchased more green Reg Grundies and I have twelve now. And another cardigan at an extremely reduced price as a gift, I'm going to sew a skirt to match so I hope I can find co-ordinating fabric. It isn't this blue, it is more of a soft teal/denimy colour.  The end of Winter is certainly a time for bargains!! I am in a quandary about this weeks recipe. I wonder should I cook with quinoa, or go straight to 'R'??  U,V,W,X,Y and Z offer fewer recipe options and I do want to fit in some Christmas cooking in December. I will think on it. Oh I can smell the cake, it smells so lovely: all apple-y and brown sugary. It is almost cooked now. Maybe I should just have a tiny little taste, just a crumb from the edge.....

Perhaps you might still find some quinces to cook with with a "Q"? Then your house would smell super lovely with the quinces cooking. Quince paste, jelly or just plain stewed forever to serve with some cream or even bought custard? I love quinces and always buy some whenever I see them.
Those dogs are always hopeful No squashing their hopefulness.

Lovely dress - thanks for the link to the pattern - it looks like I might even be able to make it without a gazillion alterations!

I vote Q for quinces if you can get them - mmmmmmm, there's nothing like the perfume of quince! Sadly, they are very difficult to find here and I don't know anyone with a tree. Might have to give in and
plant one...

Oh, now I want apple upside down cake with extra caramel sauce! Yum yum yum! (I do hope you had a crumb from the edge...just to make sure it is ok, of course!)

I hope that one day I will be grown up like you and be able to sew myself a dress with things like darts and FBAs and toiles. You are very clever.

Great job on the toile, it must be so satisfying despite the exhaustion. I also vote for quinces if you have the energy but if you have the quinoa, there's a recipe in the new BHG that might suit :-)

I loved Press Gang. I was working when it was on and used to set the VCR to record it. Bought the DVDs in recent years. Steve Morris went on to the equally excellent Coupling and also writes for Dr Who. What's not to love?

Have just been offered exclusive rights over a 100+ year old quince tree. May do your Q is for, for you. The owner of the tree is keen for stewed quinces and icecream.

It's so cute how the girls watch you, and they are so pretty outside. Fresh green grass IS tasty! That dress will be lovely!
Maybe you could cook/bake something with "Quark" which is German for pressed cottage cheese.
I don't like how Quinoa looks cooked. I've tried it once, but I can't get over the look. :o)
We had quite a different smell in the kitchen yesterday, when I turned on the self cleaning for the first time, I thought our oven was burning tires, such a stink! I'd rather have apple cake smell throughout the house. Needless to say, that self cleaning button will never be used again.

I'm glad you explained about the mirror, I couldn't get oriented for a moment! Very cute dress pattern. Sewing seems much more complicated than knitting.
My daughter and I like quinoa especially made like a tabouleh salad.

very cute dress :) the girls want one of their own :p

yum! get rid of the custard and that cake would be perfect ;p :D

You look great in the dress. I have been shopping for a blue dress for my niece's wedding but have not found one. If only I can sew. I can smell the apple cake....

I do love the end of season sales and a sweater will be wonderful with your new dress on cool mornings. I don't wear dresses anymore. I just hate my legs. I don't tan and I bruise easily (or maybe it's just that I am a clutz). I am jealous of your nice legs. I have to ask, did the Dress Gang approve?

The pups look so intrigued by the mirror! Two of you! So exciting! My doggies won't look at the mirror, they pretend it isn't there. When they were little they looked a bit and one time baby Saffy saw her reflection in the oven door and spooked and barked so loudly! I couldn't stop laughing at her. The dress looks so well made, nice shaping, and you will be stylish in your winter sale finds too!

Hehe, Peri's hackles are adorable. I always think that little patch of hackles on the rump just looks silly, not intimidating.

oh gorgeous dress! so well made, i cant sew in a straight line to save myself. very cute pic of the admiring girls as well.

You are so patient making a toile & then doing all those adjustments. I'm sure after all this, that your 'real'ress will be lovely!!

Having a cuppa, watching the fur babies...sounds soooo relaxing :)

That cardi looks like a great colour. I'm sure the recipient will be blown away with a skirt made to match as well!