I have also seen this called Queen of Puddings, but when I talked to my mum on the phone last night she said that it was a cheap and easy recipe and used up stale bread and ingredients that she always had in the cupboard. It is a pudding with a sort of baked bread and butter base, then raspberry jam and finally a meringue topping. It is lovely hot or warm, but we also ate it cold and it tasted just as good. I have halved the recipe, but my mum always made enough for eight, that meant leftovers. This recipe serves 4 but it is easily doubled. The recipe was in Imperial measurements so I have made it be manageably metric. If you don't have 2 large eggs, I suggest using three ordinary sized ones, just to make sure the custard will set.

The little black dots in my pudding are poppy seeds from the day old bread. They get everywhere when you trim the crusts!!

You will need a baking dish of some kind, I am using a 1.7 litre pie dish. 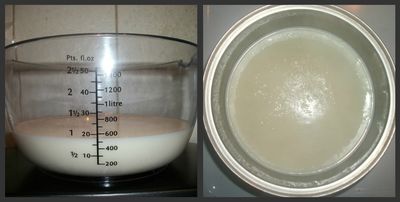 Bring the milk to the boil, that means it doesn't quite boil. You will see tiny bubbles around the edges and the milk thinks about rising in a froth in the centre. Take off the heat.

I sliced the bread and then rubbed it to make breadcrumbs, but you could whizz it in the processor, or even grate it. Add the breadcrumbs, 5 tspns of sugar, the lemon zest and the butter, stir till combined and then leave to cool for 20 minutes.

Separate the eggs, and mix the yolks into the custard and then pour into the oven proof dish and bake in the middle of the oven for 30-35 minutes. 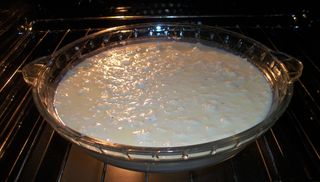 Heat the jam in a pan or in the microwave. This makes it easier to spread on the top of the custard so it is not broken. The amount of jam you need depends on the size of your dish. I used about 2/3 cup. 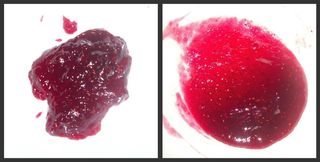 The custard is ready when it is set and doesn't wobble in the centre. Mine only took 25 minutes. Remove from the oven. Spread the runny warm jam over the pudding very carefully.

Meanwhile, whip the egg-whites till they are fluffy and then add the caster sugar and beat until all the sugar is dissolved. This isn't a proper meringue, as long as the mixture isn't gritty when you rub a little between your fingers, it is fine.

Spread over the top of the jam, I find a fork is best. Go right to the edge and perhaps over the edge a little. Sprinkle a teaspoon or so of caster sugar over the meringue. 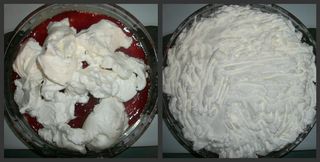 Place back in the oven for 10-15 minutes, or until the meringue topping is golden brown. 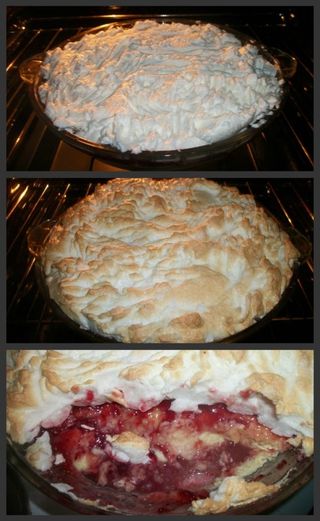 Serve hot or warm. Once refrigerated, the custard may weep a little, that is, there will be a liquid in the dish. You can pour this off, or eat it, it makes no difference. One taste, and I remembered being small and eating this on a cool Winter's evening. I love the contrast between the custard and the meringue and then the hit of sweetness from the jam. 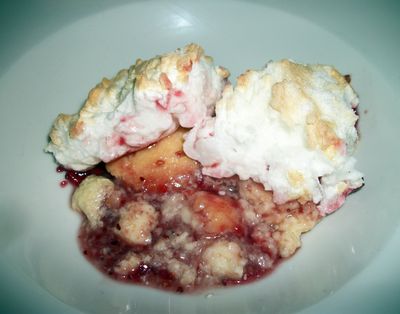 Lovely. I was looking for recipes the other night and it was a toss up between this pudding or bread and butter custard. The latter won because my queen pudding recipe didn't explain it very well. I'll definitely try this one next. It's nice to have recipes that don't need a dozen ingredients bought for it.

Yum, this looks and sounds delicious! And could easily be made from ingredients I always have in my pantry and fridge.

Yum :) Think I could make that later this week!

Oh that looks like something my nana would have made. I might have to start adding some of your recipes to my collection!

That Meringue topping baked looks perfect! I don't think I've ever made one, but this Queen pudding looks so delicious, I might give it a try.

I have never heard of this before.......
sounds very interesting!!!

Looks so good but I think it's too complicated for me. I have made bread pudding with slices of bread & then pour in the custard & bake - really easy.

love this pudding! Any sort of bread and butter style pudding really - add in jam and meringue - fabulous!

I agree - it would have to be a berry based jam. I can't imagine it with apricot or anything like that!